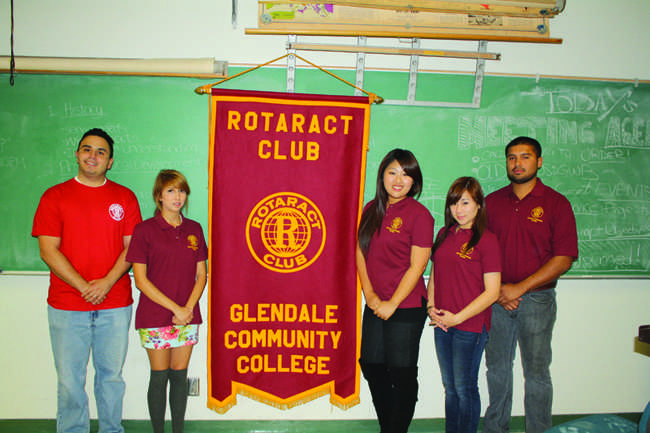 Glendale College’s Rotaract Club plans to build irrigation systems that will provide access to clean water for local communities during spring break in Honduras as part of the Global Water Brigades.

The Water Brigade focuses on Honduras, Panama and Ghana. It allows schools and community organizations to select a country they would like to help. For one week in the winter, spring or summer, students can help implement water systems and educate communities about water sanitation.

“I think the opportunity for students to go visit another culture and to see how fortunate we are here in terms of the resources that we have and how we take for granted,” said Richard Cortés, counselor at the academic and transfer counseling center. “It will be a rich educational experience for students.”

According to the Global Water Brigade website, 4.5 people of six people in rural Honduras do not have continual access to clean water.

Cortés said he has visited his parent’s home country of Honduras every five years. While on the way to visit his grandfather’s grave at Colonia Lopez Arellano in 2009, Cortés remembers viewing the surrounding towns.

“The towns reeked of sewage and there were just shacks and makeshift homes. It was people breathing in the raw sewage. I can only imagine how unhealthy it is,” Cortés said. “Abject poverty is rampant in Central America, and Honduras is one of those countries that is still underdevelopedand is plagued by corruption.”

In Honduras, the average income is $250 per month. Cortés, who is also the club adviser for the Rotaract Club, said he sees kids begging for money when at the airport and feels sad to see them there.

After hearing about his brother’s rewarding experience with the Global Water Brigade in Honduras, Cortés decided he wanted to involve GCC in some way and introduced it to the Rotaract Club.

Although Cortes has family ties to the country, Honduras was selected because it is closer to Los Angeles than the other countries and because it has the greatest need for access to clean water.

This is the first year of installing the Global Water Brigades chapter at GCC. He decided to link it with the Rotaract Club until it can become established.

The plan is for the club to drive from its lodgings to a remote community in need of fresh water located in the Departments of Francísco Morazán, El Paraíso or El Cantón. In Honduras, states are called departments instead.

Each day on the trip will be different. The students will meet the teams on the first day and begin training. On the third through fifth day, they will put their training to use and start digging trenches, putting together the PVC pipes, and building the dams and water systems for the communities. The sixth day will be spent visiting communities and educating them on water sanitation and hygiene.

Tammy Park, president of the Rotaract Club, said the trip is open to everyone at GCC and outside of GCC as well. One does not need to be a GCC student. Additionally, skills of all types are needed for the trip. Leadership, communication and building skills are just a few.

“I want that sense of belonging here,” Park said. “I want people to feel like they have a bigger purpose and are a part of this group. We need every individual here.”

Park, an accounting major, said she wanted to be involved with people who wanted to share ideas about relevant issues in the world. She hopes those who attend the trip will gain new perspectives and learning experiences.

“It’s still nice for people to gain that wisdom through the experiences they have and knowledge and different perspectives of the world,” Park said. “We all live differently and to understand and be a part of different parts of the world, I think it develops your overall in character.”

Another student, Ronald Hernandez, said he wanted to join the Global Water Brigades because of his humanitarian path. During the summer, Hernandez spent two weeks designing a water conservation system that would help the communities harvest rainwater, which he presented to the Rotaract Club.

“They are situated in a geographical region where they have a lot of natural resources,” said Hernandez, an architecture major. “But I feel that they lack the technology to benefit from the environment that they are in. By going there, I would like to introduce a system that would make their lives better, and they can learn and maybe spread that knowledge.”

Before the structure can be built through their organization, he said board members or architects and engineers must approve his designs and structure. Hernandez is also president of the American Society of Engineers and Architects at the college.

The components that make the structure are found worldwide, so he could contact the distributor in Honduras or another country and purchase from the supplier there.

Depending on the needs of the community, a single unit or multiple units can be placed horizontally or vertically. The structure will be 3 feet in diameter and 10 feet in height. Each unit could collect about 2,000 gallons of water, which is about 400 five-gallon Arrowhead bottles.

Currently, there are 10 students along with three faculty and staff members who are interested. A minimum of 15 people is needed to make the trip possible.

The cost for the volunteering trip is $750 in fees and will cover lodging, transportation to and from the airport, three meals per day, and services such as the Internet. Cortés said a humanitarian organization called Fly for Good will help lower the round trip airfare to about $500. They will leave the U.S. on April 7 and return on April 14.

Students would need to start a personal account to save money. They will also need to pay a non-refundable deposit of $250 that is due in December and will go toward the cost of the trip.

There is no financial aid available. All of the money for the trip will be raised by the Rotaract Club and the participants through fundraising events and individual donations. It is possible that Rotary International will match grants.

For students concerned about safety, Cortés said the area is safe. Water Brigades have established locations in the area and check for political discord. Volunteers will not be working in cities where criminal activities take place.

There are nine programs in the Global Brigade, which include architecture, business, dental, environment, law, medical, microfinance, public health and water.

“All we need are committed and passionate students,” Cortés said. “They need to be prepared to work. This is not a vacation; this is humanitarian work.”

Other clubs are welcomed to join them in their efforts.