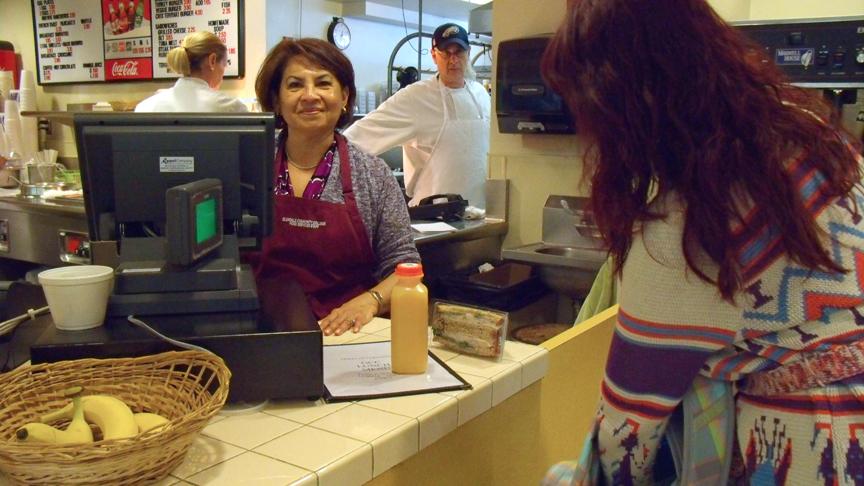 There are plans to renovate the cafeteria so that culinary arts students can be utilized to produce more dining options on campus, but with the current state of the cafeteria and its budget, it doesn’t look like it will be happening any time soon.

Nancy Jordan, food services manager, said that she wants the culinary arts and the food service department to work together.

“In doing so, that automatically helps us produce more dining options for the customer base here, and it will be a real enhancement to this department,” said Jordan.

“I think it would be a great thing,” said Feldman. “[Culinary arts] students get an opportunity to be able to practice their craft. Every other successful culinary program at California community colleges has students working in a food service environment on campus. Glendale should be same.”

Feldman added that it would provide better experiences for the students involved.

For the past three years, there have been meetings between planners, architects, and people from the college to make renovations in the cafeteria to ensure that classes can be held there. The current set-up is not well equipped.

“With some small renovations, it could be a workable class space and one of the responsibilities of the class would be to provide food for the campus,” said Feldman.

Other renovations in the cafeteria would include improving the flow of the upstairs service line and also some minor changes in the kitchen area. The plan is designed to offer a more customer-friendly flow by going back to the traditional cafeteria line where people would enter at one end and then walk through to where the hot items are, and the servers would be serving food right there and then.

Currently, customers funnel in through one side, then wait for the person in front of them to pay, and then they wait for their number to be called out.

Jordan hopes for the renovations to begin in December.

“The cafeteria experience is important because it makes things go a lot faster,” said Jordan. “They don’t have to stand there and wait for a hot item to be made for them. [After the renovation], it will be there in steam tables and all the staff has to do is serve it to them.”

The plans also include a self-serve beverage area.

One change has already been made to modernize the cafeteria. A computerized register system has been installed, which prints out the order. The order then goes to the cook line, doing away with the need of writing the order down on paper and putting it up on the magnetic board for the chef to see. The register system also accepts credit cards from ATM debit, Visa and Mastercard.

Last year was the first year there was a slight increase in the amount the college had to subsidize in the cafeteria budget. As a result, the prices for the cafeteria food have climbed a little since last semester. The menu has not changed much due to the budget situation.

“I try to keep the pricing down and the quality up,” said Jordan. “I could go ahead and lower the pricing, but then the quality of the food is going to go down because I’m going to be purchasing a lower quality product.”

Jordan added that market food costs and her payroll costs make it hard to keep the price of cafeteria food down. To make matters worse for the cafeteria, three employees have recently retired and their positions have not been filled because the college cannot afford to replace them.

One of the main items these student workers serve is soup. There are about seven to eight gallons of soup served daily in the upstairs grill.

“The consumers love our soup, I would say four days out of the week we sell out of it,” said Jordan. “We want to increase the volume of soup because there is such demand for it.”

Student Stephen Chon said, “During school days, the cafeteria is my first choice when it comes to eating on or near campus.”

Due to having a smaller staff and fewer student workers, Jordan had to temporarily close down the Milky Way cafe. Casa Ortega also has reduced hours of operation for the same reasons. She said that if she could get a few more student workers and at least one person to replace one of three employees that retired, then she would re-open it.

Jordan has plans to re-open the Milky Way cafe with an added fresh-fruit juice and smoothie bar.

“I constantly try to steer it toward a healthier menu,” said Jordan.

The menu also caters to vegetarians. The vegetarian omelet is made of baby spinach, green bell pepper, onion, sliced mushroom and provolone cheese, which is served for breakfast. The veggie burger for lunch is made of a whole grain vegetarian burger served on a sesame seed bun with mayonnaise, topped with lettuce, tomato and dill pickle.

For now, the cafeteria will try to overcome the existing economic hurdle.