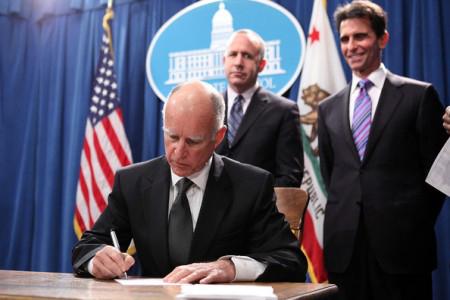 LIVING THE DREAM: Gov. Jerry Brown signs AB 131, the second half of the California Dream Act, into law. This law allows students who qualify for a non-resident tuition exemption under AB 540, to be eligible to participate in state-administered financial aid programs.

Students are one in the same when it comes to meeting the education requirements, but many don’t have an equal advantage, until now.

The California Dream Act is not the same as the Federal Dream Act, which grants a pathway to citizenship.

There are two parts to the California Dream Act that will assist illegal immigrants in their goals to achieve higher education effective January 2013.

The first part of the bill, which Brown signed in July, allows illegal immigrants to apply for private scholarships. The second grants access to Cal Grant programs for UC and CSU institutions.

Before this bill, a student’s immigration status would determine whether or not he or she would pay in-state fees, which are $36 per unit at GCC, or the out-of-state fee which is $181 per unit, in addition to enrollment costs.

“The Dream Act benefits us all by giving top students a chance to improve their lives and the lives of all of us,” said Brown in a statement.

To qualify for the state-funded financial aid, a student must meet the requirements of

AB540 is a California law that allows undocumented students to pay in-state tuition. There are several qualifications a student can meet, but the most common is that the student graduated from a California high school or attended for three or more years. That student will also be required to sign an affidavit.

While the AB540 legislation has provided a certain amount of relief for illegal immigrants, students had to pay out-of-pocket for tuition before the passing of the California Dream Act.

“I’m not Mexican enough to go to Mexico so I’m stuck in between two worlds,” said AB540 student Andres Aguilera, 19. “I don’t need anything given to me. I just want the opportunity.”

Aguilera came to the U.S. from Mexico when he was 4 years old. He is a member of Voices Organizing Immigrant Communities for Educational Success on campus, which works to help pass the Federal Dream Act.

The new law is opposed by many Republican politicians who say that it encourages illegal immigration and that it isn’t fair for legal students.

However, the California Dream Act states that qualified immigrants can receive state funding only after all the legal residents apply, thus creating competition among many students for a resource that has been significantly diminished.

“I know many students at this school who get financial aid and take it for granted,” said VOICES member and AB540 student Cynthia Gonzales, 19.

Although the California Dream Act encourages the futures of aspiring students, there are still some aspects that need to be clarified.

The VOICES club panel organized a presentation about the details of the new law on Oct. 13.

Perkins has a handful of stories of students he has worked with whose dreams have led to a dead-end road.

“A student came to me two years ago and she wanted to be a nurse,” said Perkins. “She had good grades in all her classes, glowing recommendations and hours and hours of volunteer work at hospitals. Cal State L.A. said she was accepted but they needed a copy of her driver’s license…. She never called them back.”

He also spoke of an Armenian student he worked with, who was studying to become a doctor. The student received high grades, was in the scholar’s program and was accepted into UC Berkeley. When she sent out letters requesting financial sponsorship, she received a letter from Homeland Security that her request had been denied and that she was on deportation investigation.

“America is not so rich that it can afford to waste all of its talent,” said Perkins.