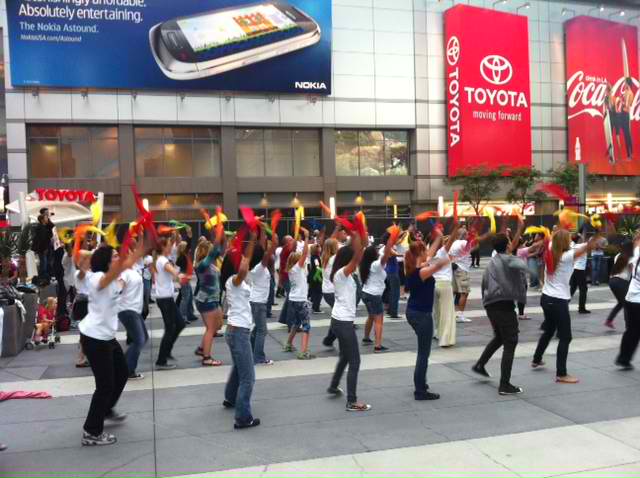 Rainbows, manifested by multi-colored bandannas, were waved in the air in a flash mob by Courage Campaign members to Madonna’s “Like A Prayer” song to mock Republican presidential candidate Michele Bachmann’s views to “pray the gay away.”

The flash mob involved LGBT (lesbian, gay, bisexual, transgender) supporters and took place on Sept. 16 at L.A. Live in front of the J.W. Marriott where Bachmann was inside presenting a speech to Republican supporters.

Roughly a hundred supporters and spectators gathered to watch the diverse group of participants in the choreographed flash mob send their message: “we’re here, we’re queer, and we’re here to stay.”

Those who didn’t dance hollered on the sidelines with posters. One said, “It’s 2011, where’s my freedom?”

Bachmann and her husband co-own a Christian counseling clinic in Minnesota that has been accused of encouraging gay and lesbian patients to change their sexual orientation.

Bachmann has openly discussed her strong opinions about the gay community in the past.

“If you’re involved in the gay and lesbian lifestyle, it’s bondage. It is personal bondage, personal despair and personal enslavement,” she said in the Edwatch National Education Conference that took place in Nov. 2004.

At the same conference she said, “We need to have profound compassion for people who are dealing with the very real issue of sexual dysfunction in their life and sexual identity disorders.”

Journalists like Anderson Cooper and Jay Leno have interviewed Bachmann about her current stance on the controversy surrounding her previous statements on gay rights but she has deflected all questions on the topic.

“Now we have to wait and sit in the spotlight and fight for we thought was rightfully ours,” said Gia Ryan, previous GCC student and LGBT member with the Courage Campaign at the event. “We’re not second class citizens and it’s efforts like this flash mob that remind people we still need support.”

Ryan is an avid activist for gay rights. She canvases with the grass-roots program called Equality for All and has done phone banking with the Courage Campaign to help voters as well as the undecided and no-vote to better understand Prop 8; the California bill preventing same-sex marriage.

The states that currently issues marriage licenses to same sex couples are: Massachusetts, Connecticut, Iowa, Vermont, New Hampshire, New York and the District of Columbia, according to the National Conference of State Legislatures.

Several men and women in the LGBT caucus are elected officials in numerous local governments and have served in Congress.

“In my generation [gay people] thought they were alone,” said Tony Totaro, 64, Long Beach, who participated in the dance routine despite a bad back. He said that he’s felt different different since he was 5-years-old. “I was very precocious growing up and I would fly out to New York (from his home in Pennsylvania) on weekends to be around people like me.”

The advancements being made in the gay community are surely comforting those who have fearfully repressed their sexual orientation.

A recent historic milestone was lifting the U.S. military’s “Don’t Ask, Don’t Tell” ban, which was finalized Sept. 20. Millions of troops have undergone courses on how to adjust to the policy change.

Another occurrence on Sept. 20 was the decision by U.S. District Court Chief Judge James Ware to unseal video recordings of the legal challenge to Prop. 8 made in Jan. 2010.

Prop. 8 was a ballot measure to eliminate the rights of same-sex couples to marry in California, which passed in the November 2008 elections. Proposition 8 was subsequently overturned in appeals court — but the appeal is being contested.