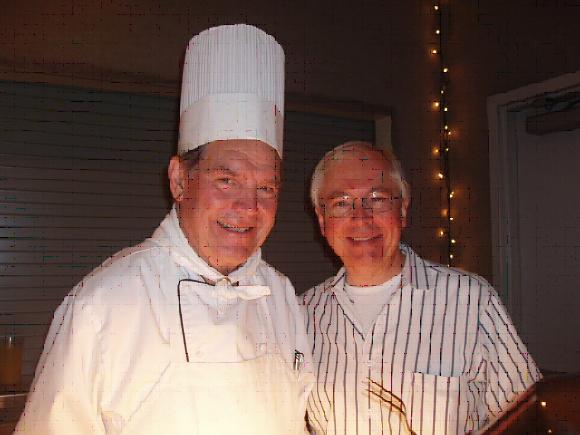 His eyes flash widely when he speaks of his latest dinner about to be served. He thoughtfully reviews his early morning run to the market, the painstaking strategizing of the evening’s entre – a cutlet with thickened meat sauce, his busy regimen of food preparation and the labored staff coordination. He’s setting the stage. He has a very important date tonight. Soon he’ll be serving his next unsuspecting audience of hungry stomachs a meal of magnificence, another “magnum opus.”

Community service is the career he has chosen to keep himself young and enthused in his retirement years. Volunteering as the executive chef at the Pasadena Senior Center for the past 5 years, Chef Jerry Salthouse is preparing another dazzling meal that will be the focal point of the evening’s social program. And he’ll dress the part, donning his towering chef’s hat that indicates his culinary status.

“My seniors,” he says proudly.

Whether they’re celebrating St. Patrick’s Day with a lively dance, cloaked in green paper party hats, or celebrating a Thanksgiving dinner, lucky local seniors come to feast on one of Salthouse’s juicy, slow-cooked corned beef and cabbage fit for St. Patrick himself or a turkey “dressed to the nines.” A weekly lunch and dinner schedule at the center could easily include 400 to 600 lunches and 300 to 1,200 dinners. But his years of experience have prepared him to know how to well-handle the eagerly awaiting mouths.

Compliments always pour in. “Delicious Jerry!” “Best meal I ever had. We loved it!” Fit for a king, Jer!”

But little do his many local admirers know that the meal they just licked their lips over was indeed a meal Certified Executive Chef Jerry Salthouse had served to a king, or an American President, for that matter.

At 73, he never skips a beat as he glides from his weekly volunteer job at the community center to serving dinner at a neighborhood lodge, then on to prepare a feast for a friend’s wedding reception. Although his tall, strong frame belies his age, it is his stories that let his listeners know that he is widely-traveled with years of golden culinary experiences that few men are able to reminisce about.

His passion at the Senior Center or local Elks Lodge is easy to see if onlookers would only take a break from a dance or leave the bar for a moment, and stand and watch him by the stove. Flying, confident hands rhythmically work his frying pan handles. His long, hot kitchen utensils move like a baton, conducting a large, melodious orchestra.

But what can’t be as quickly seen behind the intense gaze of Salthouse’s kindly, knowing eyes is the big heart of a man who never forgets a former friend or old employee like he never forgets a secret recipe. Nor can he forget the joy he gets from his volunteer job at the Senior Center. To learn more about him, one must speak privately with Salthouse’s friends, patrons and family, since he is all too modest to talk about himself or his achievements.

Chef Jerry Salthouse was chosen as Chef of the Year by the Los Angeles Herald Examiner in 1968. Over his fifty year career as a chef, he has served a list of guests so long and prestigious, it reads like a “Who’s Who” International: Henry Kissinger, Cesar Chavez, Governor and President Reagan, Princess Grace, Prince Rainer, Cary Grant, Bridget Bardot, Ryan O’Neal, Adnon Kashoggi, Pierre Salinger, Charles Revson, Ali McGraw and more. And he served many international celebrities when he was hired as personal and executive chef to billionaire Kirk Kerkorian on his yacht, the Tracinda Jean, in the 1970’s as they sailed throughout the Mediterranean.

“You’d never know Jerry has had such a celebrated career as a chef. He is so modest. He loves people. He always has time to help an old friend or someone in need. People are important to him. He has a heart of gold,” boasts longtime friend Anne Denis as she revels over one of his latest meals.

Never to busy to visit a former employee in a nursing home, or cook up the special seven course birthday surprise for a relative that he once served to Princess Grace that includes his unforgettable Coquille St. Jacques, Jerry continues to create something new and elegant for an anticipating audience.

“Jerry makes you feel ‘royal,'” explains Barry Ross, his stepson and a recent recipient of one of Salthouse’s special birthday dinner parties. “He seems to deeply understand the uplifting impact a well-presented meal can have on people. He makes you feel like an honored guest. You feel good about yourself and being with others. It makes you appreciate life more.”

“Jerry is a gift to the Pasadena Senior Center,” said the Center’s Operations Manager, Ginger Miller while presenting the Senior Service Award to Jerry. “He caresses the aroma and textures of good food the way an artist prepares his canvas for a work of art. Each step is planned to match color and fragrance from the first sip of wine to the last tasty dessert. We are lucky to have him. He makes us all feel so special.”

“I know the seniors appreciate my work,” reflects Salthouse in a hushed tone. “They always come up to me and thank me.”

“My bounty in life is seeing people genuinely happy,” he glows. “Happy because they got something that they hoped for, a lifestyle, and exactly what they paid for, and more.”

One may think that for Chef Salthouse, it is all about the prestige of a well-cooked meal. But in the end, using food to make kings of common men, it is increasing people’s happiness in life that is his ultimate reward.