Challenges for Women in STEM Jobs

“How serious are women taken in STEM? A worldwide change that needs to happen.” 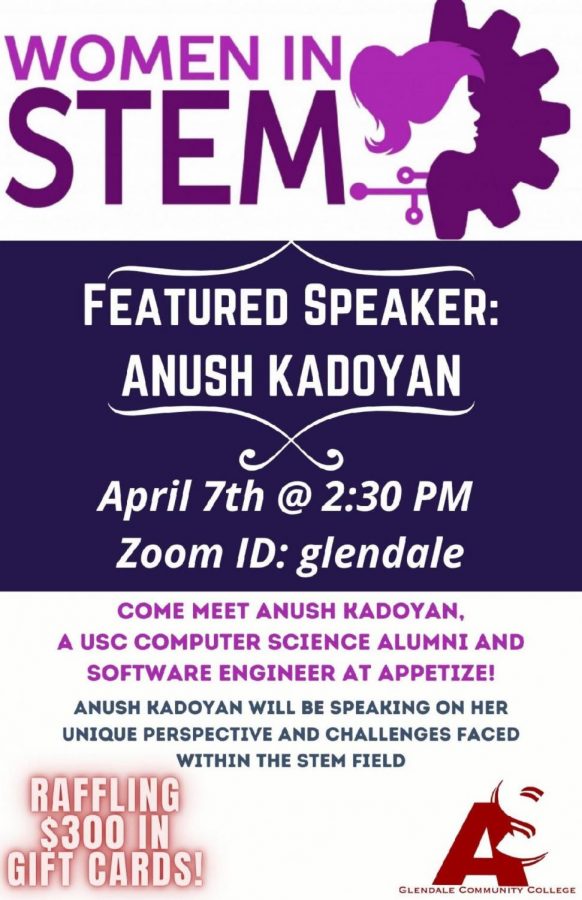 At GCC, she was part of the Scholars Program, the Capstone Program and the Robotics Club. She transferred to University of Southern California, where she participated in Women in Computing, Robotics courses, and Web Development courses. Kadoyan achieved her Bachelor’s in Computer Science and for three years has worked as a software engineer at a company called Appetize.

During her presentation, Kadoyan said she wasn’t even sure about going into the STEM field but with the help of her family members who are engineers which helped her make a decision. The opportunities that come with STEM allows people to be part of new environments that they’re comfortable with.

Kadoyan said that the barriers that women face in STEM reflects the disadvantage that sexism imposes on society. “Girls are pressured all the time to care more about makeup and feminine things. As opposed to boys, who from a young age play with Legos, they get gifts that encourage problem-solving, they don’t really care for their looks.” She continues to show images of shirts that are for girls that say, “I’m Too Pretty To Do Math” and “Allergic to Algebra” while boys’ shirts will say, “Boy Genius.”

She showed event participants two books: The title of the girls book was, “How to be Gorgeous,” while the boys book was titled, “How to be Clever.” She noted that both authors are women. Regardless of which profession that women pursue,  their looks shouldn’t be the value that society places on them.

Kadoyan said family pressure can also be a factor because a woman often is urged to have babies soon without thinking about what else she might want to do with her life. Some families would have a woman be a stay-at-home mom, rather than contribute earnings to the family and ease financial worries.

Her presentation turned to the disadvantages that women face in the workplace, such as  being held to “higher standards, doubted in abilities, given unrelated ‘creative’ or ‘nurturing’ work, unfair conditions (pay, treatment) and frat-boy culture.” Kadoyan said she’s one of three women developers among more than 100.

She said there’s a big frat-boy culture at her firm, where there is a bar in the building and company parties with alcohol. The potential for sexual harassment and even sexual assault tends to discourage many women from attending such events, which further encourages a frat-boy culture.

Men often dismiss the risk because they don’t think that anything can happen but talking about harassment should be an open conversation in all working environments and even on campus.  Certain things can be reported to human resources, in any industry, while more-subtle things that can happen to women too often are brushed aside because “it’s not that big of deal” when in reality it can be the start of an escalating problem, she said.

There’s a need for change within the workplace, and if people don’t believe that women feeling uncomfortable or being treated badly in these situations is reason enough for change, therein lies the problem. Kadoyan says, “In reality, things are not really changing. Progress is so slow. While things have improved throughout the last few decades, they’re plateauing currently.” The change that needs to happen is preventing harassment of women in any setting.  She contends that employer HR departments don’t always have employees’ interest at heart and are, most likely, prioritizing the company’s interests.

Possible solutions include exposing girls and women to STEM,  mentorships on STEM from people like Kadoyan, educating people about gender discrimination and the pay gap, and making and passing laws and regulations that will help eliminate inequities.

Students attending the event said that changes can happen at GCC by simply talking about these issues because most people don’t realize greatly they affect  women.

The entire event, co-hosted April 7 by Associated Students of Glendale Community College, can be seen here.