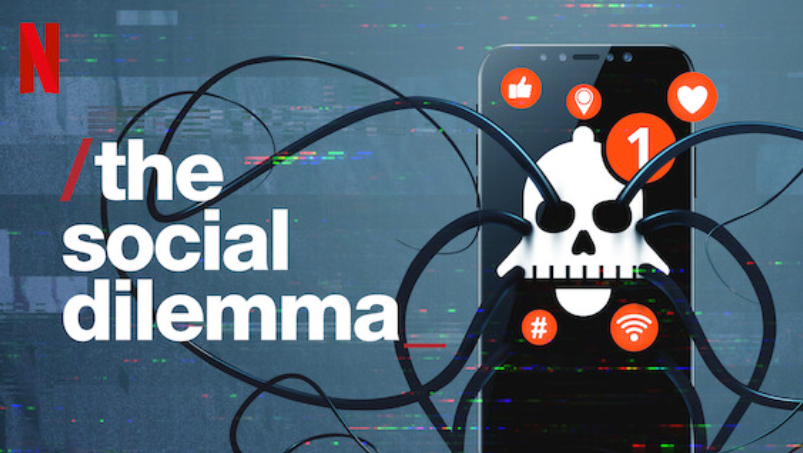 Social media has become a part of our day-to-day life that it has almost become an extension of our body. We wake up and quickly check our phones to see if we missed anything. The Social Dilemma on Netflix delivers an anxious feeling for what the viewers will learn, especially in the end when social media is addressed. Many of those interviewed in the documentary were previously part of big social media companies like Facebook, Youtube, and Pinterest. The main focus was on Tristan Harris who worked at Google as a Design Ethicist and is now Co-Founder of the Center for Humane Technology. While working at Google, he made a PowerPoint called “A Call to Minimize Distraction & Respect Users’ Attention” which brought awareness to how users should pick what they want to see instead of having big companies telling them. The PowerPoint quickly got everyone’s attention and just in a couple of days, it was forgotten. Something that even we see in social media when it comes to movements or when there is a country going through an important change, we’ll talk about it for about a week and forget in a week. We won’t follow up if a change actually happened or if the problem is still going on.

We all know that once we put something on the internet it’ll always be there even if we delete it in a second because that’s how the internet works. However, when it comes to social media companies, they take it to the extreme of watching your every move so that they get to know who you are. They’ll study how long you look at a post, what the post is about and they’ll even know how you’re feeling. Their main focus is to keep you on their app and constantly engaged with liking, commenting, sharing, and sending direct messages. The three main things that they focus on are engagement, advertising, and growth. They need you to be engaged so that they’ll be able to make money off you by advertising what you’ll most likely click on and with that, their app and company are growing.

Social media addiction is something that happens to everyone because our minds are vulnerable to begin with especially when we are in our pre-teen years. Another factor that social media has brought on is the increase in self-harm and suicides. There has been over 62% increase when it comes to self-harm in girls ages 15 to 19 while those that are 10 to 14 have over 189% increase since 2009 (Centers for Disease Control and Prevention). Suicides rates have increased by over 70% in girls ages 15 to 19 and those aged 10 to 14 have an increase of over 151% compared to the average from 2001 to 2010, according to the Centers for Disease Control and Prevention. Even former employees from social media companies have admitted that they have fallen into addiction and that there’s one app that they see more addiction to than the other.

Many of us fear the day that AI (Artificial Intelligence) will rule the world but what we don’t know is that it’s already running the world. People who made these systems don’t have control of them because their existence is to evolve so that the company can make more money off of us.

By the end of The Social Dilemma, the focus of this documentary wasn’t to get rid of social media and have everyone delete their accounts. Just like everything, there are pros and cons to social media. What this documentary is trying to say is that there needs to be a change in social media because without that change we will start seeing conditions within ourselves decline even more. There needs to be an outlaw in human futures because that’s where these companies are able to get money and study how they’ll be able to change the future. In the perfect words of Jaron Lanier, “I don’t hate them. I don’t wanna do any harm to Google or Facebook. I just want to reform them so that they don’t destroy the world.” This is why we need to reform social media, so that we can better the world and don’t become addicted. So that we won’t fall even lower as a society that struggles with mental health and doing things below average.

I interviewed Christy Seguritan, a UCLA student who has worked as a social media intern before at a medical clinic and has experienced the pros and cons of social media. She uses social media constantly and is in the know when it comes to trends happening:

El Vaquero: How many social media platforms do you have? And which are they?

El Vaquero: Before looking at your stats, how much time do you think that you spend on these social media platforms?

El Vaquero: Now look at your stats and can you tell me how much you actually spend time on it?

Seguritan: 9 hours and 6 minutes per week.

El Vaquero: At what age did you get your first social media platform? Do you think that it affected you at that age?

Seguritan: 6th grade so like 10 or 11. Yes, because it was where I communicated with friends about stuff we like together. It was also where I did more messages than calling. I started to care about likes, themes for my posts, filters, and what I post. Also, about following ratios.

El Vaquero: There are advertisements on every platform, How have you engaged with them? Did you like the post, buy the product they were advertising, or just open the link?

Seguritan: I bought 2 things that were advertised to me on Instagram. It was a face mask and belt buckles for your pants that weren’t that essential. I bought the face mask because I saw that it was pretty and made by a woman of color and I wanted to support it. The belt buckles ended up not even working even though they were a good item to help with my pants. I only open links when it comes to music I’ve never heard of.

Seguritan: It had posts of Instagram models and TikToks. It has fashion as well with some of my interests like animal crossing and art. My For You page on Twitter mostly consists of entertainment, politics, and some sports.

El Vaquero: How do you typically get your news? How do you know if they’re factual or not?

El Vaquero: So how do you think that social media has affected your relationship with family, friends or significant others?

Seguritan: I think it has helped me stay connected with people that I don’t usually talk to and with those that I talk to on a daily basis.

El Vaquero: Do you think that there needs to be a change in social media? Do you think you would notice that change?

Seguritan: I would like it if the timeline on social media would be in chronological order and that they’re no advertisements because I feel like they manipulate me. I wouldn’t notice changes that have a lot of likes or something new but I would notice if they advertised something that I looked up on another website.

All things considered the documentary does give suggestions like using Qwant instead of Google because they respect your privacy and don’t employ user tracking or study what you’re searching for. Another suggestion is that you turn off your notifications on anything that you don’t deem important and especially on social media. A good way to gradually stop looking at your phone is to not have it on you when you’re at home and to not have a ringer on because that will only make you want to look at it or simply have it face down.