What if we addressed school shootings and bullying in a different way? 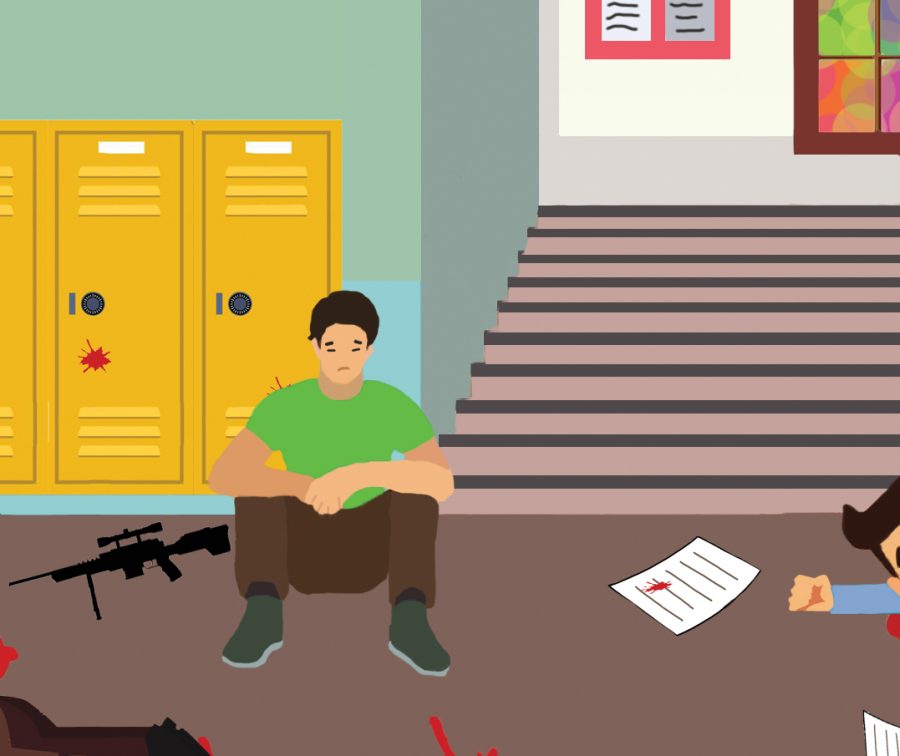 A young boy opens his school locker to show off his new backpack, a young girl shows off her colorful binders, another boy sits in the library with his high tech headphones, and a different boy runs down the hall in his fresh sneakers. Then, screams can be heard and the chilling sound of “pop, pop, pop” echoes out. As chaos ensues, children continue to show off their new back-to-school items as they flee from a school shooter. Finally, a young girl crouched in a dark bathroom with her feet on the toilet, tears rolling down her cheeks, texts, “I love you mom” on her cell phone and says, “I finally got my own phone to stay in touch with my mom.”

The last image is a black screen with the words, “It’s back to school time and you know what that means. School shootings are preventable when you know the signs.” The message is a public service announcement video that Sandy Hook Promise released, a non-profit organization founded and led by family members who lost loved ones in the Sandy Hook Elementary School shooting on Dec. 14, 2012 in Newtown, Conn.

It’s graphic, disturbing, and meant to stir up your emotions to get a message across. We live in a time in America that school shootings have become an alarming reality, and something needs to be done. Why do these shootings happen and what can we possibly do to stop them is what most of us ask ourselves. The conversation then often turns to the topic of gun control and the problem that we have in this country with firearms. What if we also turned the conversation to the problem with bullying and mental health education?

The tragic reality of school shootings is one that we have recently been forced to relive over and over again. According to CNN.com, within only 21 weeks of school in 2018, the United States had experienced 23 school shootings that resulted in either injury, loss of life, or both. It would be ignorant and irresponsible to blame all of these shootings on the effects that bullying can have, but it is definitely a huge reason as to why these shootings can happen.

Author Marcel Lebrun writes, “Youths who have been bullied, isolated, harassed, threatened, and made to feel secondary have been the majority of the shooters,” in his book “Books, Blackboards, and Bullets: School Shootings and Violence in America.”

Bullying is a relatively new topic being studied, but the information out there paints a grim picture. The book “Cyberbullying: Bullying in the Digital Age” by Robin M. Kowalski provides us with some statistical insight. Starting with age, most studies have found that more children are bullied during elementary grades than higher grades. It’s also found that, “boys are more likely than girls to bully, and a recent meta-analysis of 153 studies since 1970 concluded that boys were more likely than girls to be ‘bullies’ and ‘bully victims’ […].”  Kowalski found that “boys are more likely to be physically bullied by their peers and girls are more likely to be bullied through rumor-spreading or through sexual comments or gestures.” As for socioeconomic factors, it’s typically thought that bullying is more of a problem in urban schools, but there isn’t research supporting this view. “In fact, bullying has been documented in diverse communities across the U.S. (and around the world),” Kowalski writes.

If we want to truly attempt to change some of the results that stem from bullying, addressing mental health education is a good place to start. In the book “Promoting Mental, Emotional, and Social Health: A Whole School Approach,” author Katherine Weare points out a big flaw in our education system. “In education, for example, work on mental, emotional and social health issues has mostly been focused on pupils of lower abilities, or those seen as troublesome or troubled, rather than being seen as of relevance to the whole school community, to ‘normal’ pupils or to teachers,” Weare writes.

Students already have classes like psychology and sociology once they get into high school and college, but aren’t really taught things about mental health before that. Even though grasping those subjects would be too difficult for younger students, we can teach them about common mental illnesses.

Therapist Bree Callaham gave El Vaquero insight into what a class like this might entail when she was interviewed. She suggestedsed teaching them what these illnesses look like and teaching them what the warning signs are for depression and suicidality. Other things she said a class like this could teach is: what you do if you or a friend has a panic attack, what it is like to go to therapy, and inform them whether or not their parents would have to sign off for therapy. Some states, like California, don’t need a parental signature for kids who are 12 and over if they say that they have a reason to not tell their parents they are going to therapy.

A handbook given out could arm them with resources to give them information like a suicide hotline, names of low-fee clinics, names of private therapists, and places they could go to take part in support groups. Teaching some basic history of mental health would also be valuable so that students could be more informed about the subject overall.

Some education could start at the elementary level. Part of what this would incorporate is teaching emotional intelligence and somatic awareness. Therapist Bree Callaham spoke to El Vaquero about the wheel of emotions saying, “If we could teach that to kids. That it’s possible that you are feeling a combination of all of these things right now, or [ask] can you name what you’re feeling right now?” She described teaching somatic awareness as, “teaching awareness of sensation in the body.” An example of this would be a child being able to communicate that their stomach is clenching up because they are stressed out about their test later. This type of focus would also teach kids how to communicate their emotional world more accurately.

Schools could also implement a listening hour where kids can come in and just be listened to. They would know that someone is there for them and that they are truly being heard. This would be a good opportunity to teach kids how to listen to each other as well, and teach them how to really hear each other. It’s one thing to listen, but it’s another thing to actively listen. It may sound absurd to have the idea to teach this, but most adults can’t even actively listen for very long.

It would also allow kids to practice communicating how they feel so that it becomes natural and easy. A good template to start with would be something like: “When someone does (blank), I feel (blank),” or “Right now I feel (blank) because of (blank),” says Callaham. “When you start practicing it [communicating your feelings], you start actually paying attention to what the feelings are that are coming up instead of suppressing them,” she said. Empathy could be a focus of the class as well as it doesn’t come inherently to every child, especially if it’s not modeled in the home.

The Sandy Hook tragedy still haunts us today, and now many more school and mass shootings have been added to the ever-growing list. While the public service announcement put out by Sandy Hook Promise forces us to focus on the severity of the problem that we face as a society, the real question is, how are we going to take action to prevent these heinous acts? It may be unrealistic to think that we can stop every shooting, but we can start with an entirely new system of educating our youth. The hope is that we can create generations that are mentally healthier than any generation that came before, and that we won’t have to keep sending our children to school with back-to-school gear that would help them to survive a school shooting.

Jenilee Borek can be reached at [email protected]