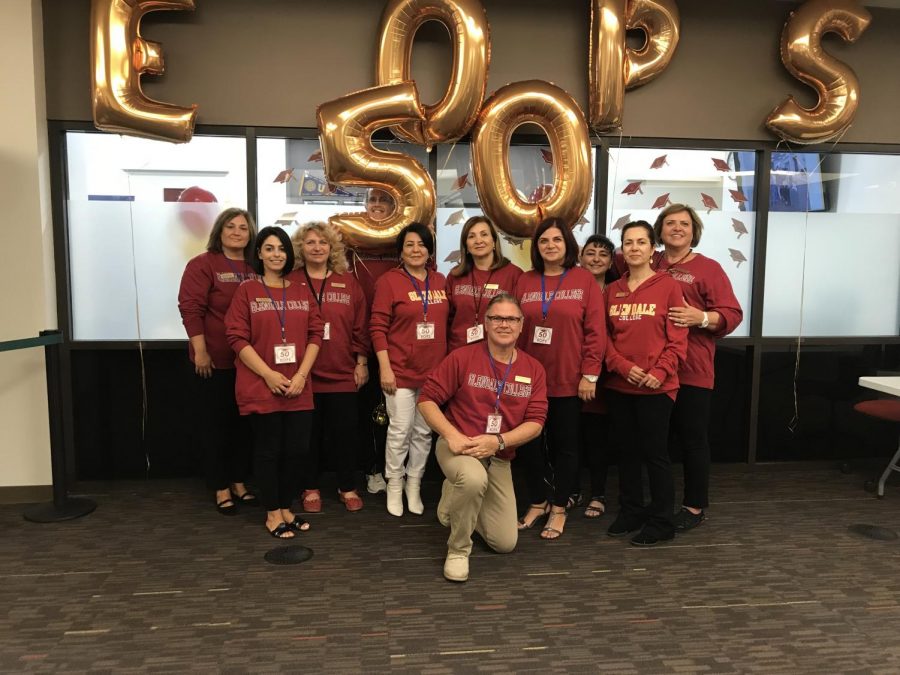 Antoinette Wright had just become a single mom and didn’t have any plans of going back to college. Wright had dreams and through a path of self-discovery, eventually pursued them by going back to school.

Wright has received an A.A. in both Social Science and Visual Arts-Photography. She is currently working toward getting her B.A. at Summit College online. She hopes to get her Masters in global leadership and start a nonprofit advocating for holistic health.

None of that would even be possible if it would not have been for EOPS (Extended Opportunity Programs and Services),  and CARE (Cooperative Agencies Resources for Education). This month marks the 50th anniversary of the program at Glendale Community College.

On Sept. 12, EOPS hosted an open house to celebrate 50 years of serving and assisting the students within the community who may have been affected by language, economic, or social barriers. EOPS is a state-wide program that offers services to students who have the potential to achieve in higher education.

This program provides specific assistance to students who are more likely to be disenfranchised or face language barriers. EOPS serves as a counseling program and provides help in making sure students are on a solid graduation path. Some of these services include tutoring, academic counseling, student progress monitoring, career planning, and more.

Not only does EOPS serve as a counseling program, but they also provide financial services such as book vouchers, meal cards, and emergency loans. Within the EOPS, there also lies another program, CARE. CARE is a support service aimed at students who are single parents and qualify for EOPS services.

CARE was founded in 1977 at Imperial Valley College. Since then, it has continued to grow. In several years after its formation, it had already spread through 13 campuses. By 1982, CARE was established in all California colleges. As of today, CARE still operates on all 114 campuses in the state.

EOPS was started in 1969 when Senate Bill 164 passed and established the program for all of the state’s community colleges. Following this, in 1975, Glendale Community College established the EOPS program. The statewide initiative has been a positive influence in other programs within the college and has statistically proven that students in EOPS, despite setbacks in their life, will achieve at the same or higher rates compared to non-EOPS students.

The program’s staff is particularly loyal to it. Osheen Keshishian has worked in EOPS for over 30 years. A plaque dedicated to his passion for helping students was placed in the student waiting area in the EOPS office.

For staff like, Keshishian, the successes of students are everything.  Kasan Butcher, like Wright, attributes his success to EOPS. He’s a father and found it difficult to juggle his personal responsibilities with school. He credits EOPS with helping.

Since 2016, Butcher has received six scholarships and was awarded the Jeanne Cunningham Award, which is given to a student transferring to a four year university, has homemaker responsibilities, and finished over 50 units while maintaining a GPA of 3.5 or higher. During his time at GCC, Butcher has received an A.A. in Health Sciences and is now a second semester nursing program student.

During a meeting on Sept. 10, the Board of Trustees approved of recognizing the month of September as EOPS month and encouraged other colleges to spread awareness of EOPS to advocate for prosperity among students who may not know about the program. Program organizers also said they were grateful to the GCC Foundation for designating funds to purchase caps and gowns for students.

In order for people to qualify for EOPS, they have to meet certain criteria for eligibility. That information can be found online: http://bit.ly/EOPSatGCC

If you do qualify, EOPS is currently accepting applications for Fall 2019. The deadline to hand in an application is Sept. 20.

Elone Safaryan can be reached at [email protected]