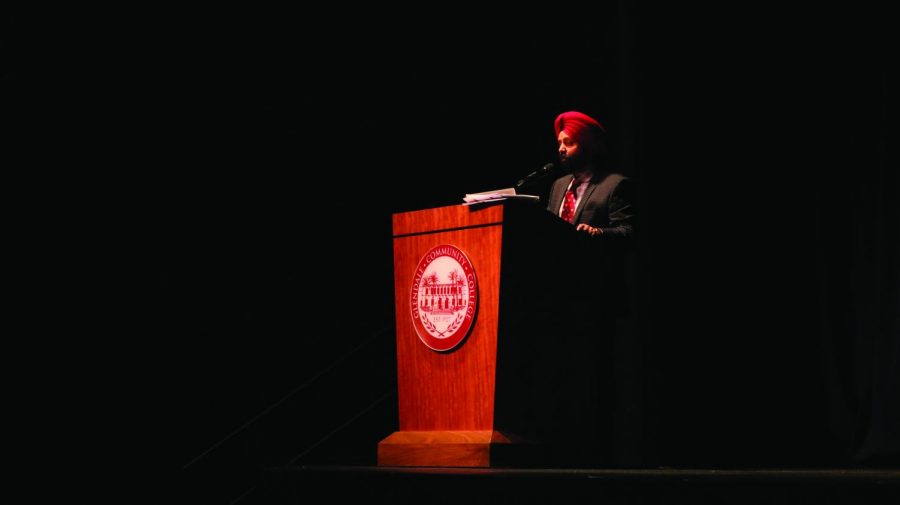 In efforts to honor Martin Luther King’s legacy, the Glendale College Foundation hosted its fourth annual Martin Luther King Jr.Interfaith Breakfast on Jan. 15, the same day the great leader would have turned 90.. The agenda was full, as speakers of different backgrounds shared their take on the importance of love, tolerance and perseverance—things that MLK actively advocated.

“We use the word ‘interfaith’ because there’s a common denominator, common thread that runs through all of this, which is love,” emphasized Robert Hill, dean of student services at GCC. “This is about faith, love and community.”

To kick off the grand birthday celebration, comedian and master of ceremonies Aisha Alfa, directed the audience to “Turn to [their] neighbors and tell them ‘I love you.’” A powerful notion, this did not only force a group of strangers to let loose, but also emphasized King’s greatest philosophy of love.

With a meaningful message underway, Rana Singh Sodhi took the stage as the keynote speaker. Sodhi’s one-of-a-kind story left many speechless and wondering how he survived through the darkest of times.

Sodhi lost his brother in what is known as the first hate crime related to the 9/11 terrorist attacks. He proudly wore a turban, which was ultimately the reason why his brother was killed some 18 years ago. “I will not take off my tuban,” he said.

Despite dealing with depression and sadness due to the loss of his ‘best friend,’ Sodhi knew that he had a bigger mission in life; to educate. Since the very day of his brother’s murder, he has dedicated his life to educating America about his religion, Sikhism, and its teachings.

Healing took a lot of courage, but Sodhi ultimately attributes his strength to the power of forgiveness. As he sat across from his brother’s killer, with only a glass window separating the two, Sodhi told the man that he forgives him.

As the event progressed, more speakers shared their insight on the concept of creating and holding a strong, supportive community. Glendale City Clerk Ardy Kassakhian, for example, reminded the event-goers that racism and injustice happens everywhere, even in the Jewel City and surrounding areas.

In a presentation, Kassakhian revealed the presence of American Nazis rallying in La Crescenta Park. He also discussed former mayor George Wickham, and how in the 1950’s Wickham placed restrictions on rental properties, only allowing Caucasians to reside in them.

Gospel singer Chris Hawkins kept the mood light as he sang the “Happy Birthday” song in a unique, gospelized version. Local Buddhist monks read their blessings for those who attended, spreading an overall mood of bliss and appreciation.

Later in the afternoon, a panel of students gathered in the Student Center for a community town hall, where they discussed topics regarding the African-American student experience at Glendale College.

Organizers once again reminded the student body of the many resources and success strategies that the college offers, bridging the way for students to get involved— despite race, ethnicity or beliefs. All in all, the event instilled a genuine theme of unification, by highlighting all the ways the Glendale community has come together to address and eliminate injustice, stigma and violence.