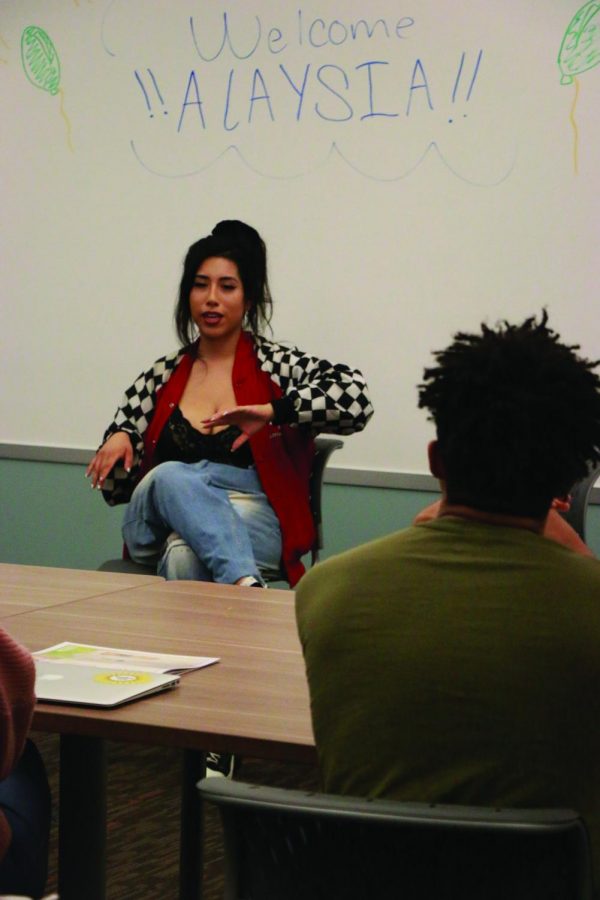 Alaysia Navarro recounts stories from the life a a female radio personality.

El Vaquero newspaper, along with GCC’s Journalism and Radio clubs, hosted its annual “Journalism Day” event on Nov. 19 to showcase local talent and allow members of the community to talk to the journalism department head and students involved with its various initiatives.

Young journalist and broadcaster Alaysia Navarro spoke to students and other attendees about the female experience in the field. “Don’t let anyone tell you that you can’t do something,” she said, urging students to work as hard as they possibly can in a competitive career market.

During a Q&A session attended by over 40 students, staff and faculty, Navarro discussed the importance of putting oneself out there. “What’s the worst that can happen?” she said, citing that the risk of rejection isn’t really that much of a problem when one has so much to gain. “You’ll be satisfied if you [take] your chances,” she said.

The event was moderated by journalism instructor Rory Cohen, who noted that students who take chances on internships, freelance assignments, and generally “step it up” are the ones who are most successful in the media industry.

Navarro graduated from California State University, Northridge, with a Bachelor’s degree in Broadcast Journalism. She has found her broadcast home in multiple popular companies, including iHeartRadio and Power 106 FM. She also hosts her own show, “No Filter with Alaysia Navarro,” on Dash Radio.      Speaking to students, she talked about how she’s interviewed individuals like famous rapper Playboi Carti and television personality Kim Kardashian.

Navarro went on to accentuate the importance of making a bold move, all the while staying original and true to oneself. In the world of digital communication, Navarro has always chosen to hand deliver her resume to a possible place of employment. This does not only positively impress a potential employer, but also singles out the “more willing” candidate and creates a “face to the name” kind of a deal, she explained.

Social media has been a rather important tool in Navarro’s career, as she implemented it in many aspects of promoting and creating cross engagement between her blog and podcasts.    She indicated that in this day and age, one can be as successful as they reach out to be. Information is more available than ever, it’s all about creativity and willingness to be successful, she pointed out.

Students in attendance were particularly interested in the connections the broadcaster made. It all started with her own personal drive. “I started going to events and concerts, looking for growing artists,” she said. “I made my own platform. Then I started putting my interviews on Soundcloud.”

Possibly the most relatable advice given during the talk with the students, was about professionality in the work environment, and how one can stay motivated on stressful workdays with uncooperative colleagues.

“If I feel bad energy, I focus on professionalism,” she explained. “Keep it professional and focus on what you want and what your goals here are.” Navarro said she has been able to deal with daily pressure with a smile and by remembering to take her work seriously.

You can catch “No Filter with Alaysia Navarro” on Thursdays at 4:30 p.m. on Dash Radio, or you can hear her interviews on Soundcloud.