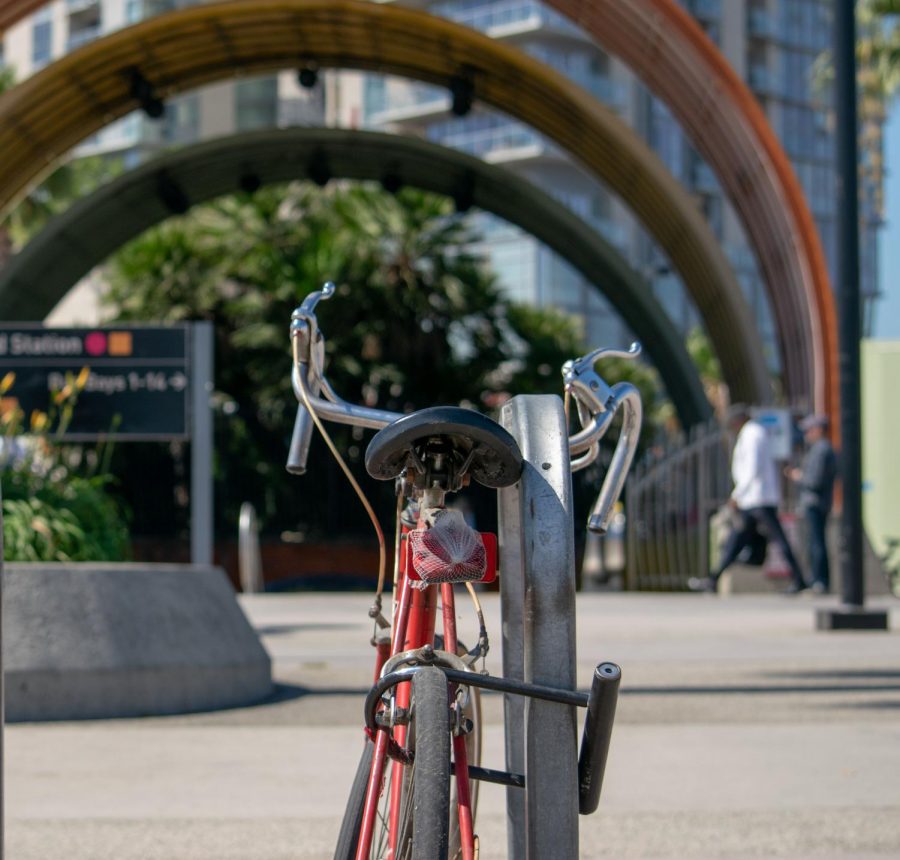 Bike parking has become tremendously easy to spot in the city.

“Safety is the number one thing when riding a bike,” said Frank. Perez Ponce, a resident of Hollywood and biking enthusiast. “Being cautious of your surroundings is second.” Through the years , he had to learned how to protect himself from aggressive drivers. He advises other riders to stay away from boulevards, avenues, or any busy street in order to stay safe. “Taking small streets, it’s a lot safer,” he said.

Metro and the city of Los Angeles have jointly founded a pilot program called the Share Program, the first one in the country to be overseen by a transit authorities. Though its day-to-day operations will be managed by a private company called Bicycle Transit System Inc. About $11 million was invested into the program. A major goal is for the bike share plans  to bridge the so called first-mile last-mile gap between public transit and people’s home or workplaces. Transit officials believe that doing so will help promote more use of buses and trains. The pilot will make up to 1,000 bikes in 65 stations for short-term rentals across Downtown Los Angeles.

Shop-Ride-Nela (NELA) was the first pilot program of its kind in los Angeles to create a 3.6 mile which traversed into northeast Los Angeles shopping corridors. Los Angeles County has 2,016 miles of bike path, but only 757 of those miles are separated from car traffic. Traffic officials are discussing the expansion beyond downtown. They have chosen to partner with nonprofit coalition of community organizations.

The Los Angeles County Bicycle coalition (LACBC) is a membership based non profit organizations that builds and improves the bicycling environment to bring diverse communities together from the entire region. It was founded in 1998 by bicycle advocates Joe Lipton and Ron Milan.

“One form of meditation is riding my mountain bike where I feel safe,” said Nelson Lopez, a resident of Woodland Hills and a bicyclist, who doesn’t like commuting on his bike around the city for safety issues. “It defeats the purpose,” he claimed. LACBC provides fun places to ride through advocacy, education and outreach. Los Angeles’ reputation is that of a car centric region. LACBC’s cycling movement is to envision a region that serves all community members, despite their economic situation and encourage healthier modes of transit.

The “3-foot rule” was signed into law, a bill that  by Gov. Jerry Brown in Sept 23, 2013, and will prohibit the driver of any motor vehicle from passing a bike rider on the road unless there is 36 inches of space between them. However, the new law states that if a driver is unable to give a cyclist three feet due to traffic or road conditions (including the weather and width of the highway), the driver must instead slow to a reasonable speed and pass when doing so would not endanger the bicyclist. A violation carries a base fine of $35, unless the violation causes a collision and injury to the bicyclist. Then the fine is $220.

“Obey the rules,” said Perez. He continues to commute to work everyday on his bike and he has adapted to the challenges he faces on the busy streets of LA. Unlike Lopez, who is passionate about the sport and enjoys it, Perez lives in Hollywood where parking is easier to get around by riding a bike as opposed to  having a car. In the city traffic is heavy and most apartments don’t have any parking spaces available for tenants. Plus, it helps the environment and reduces smog.