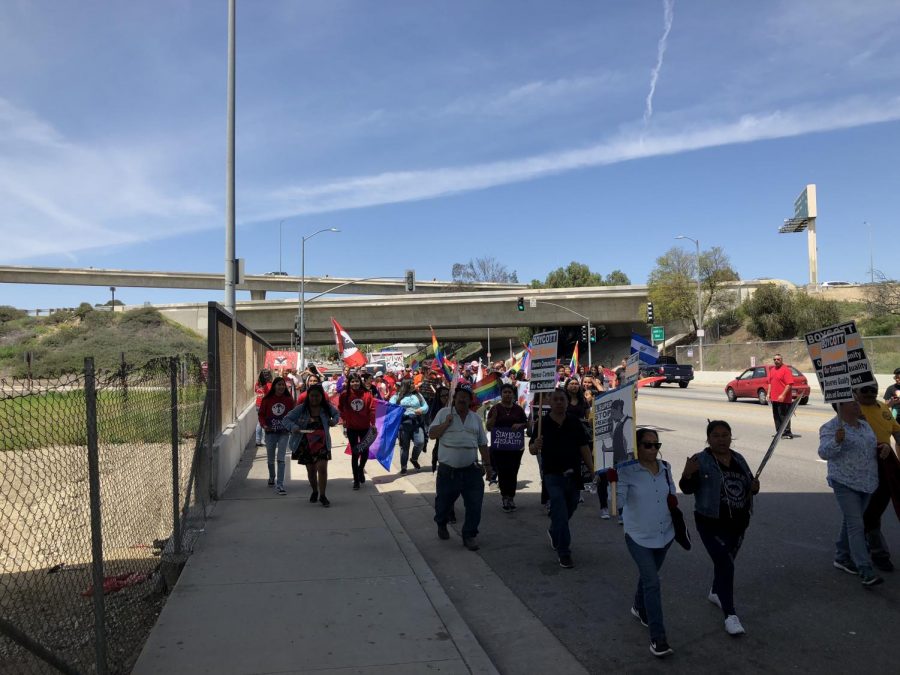 The 25th annual Cesar Chavez March is organized by multiple groups, including the LAUSD teacher union, the United Teachers Los Angeles, and others.

Among the few that went up were Los Angeles Unified School District Board of Education member Kelly Gonez and migrant LGBTQ+ advocate Ronnie Veliz.

Both Gonez and Veliz touched on the importance of school safety and voter turnout.

“We’re living in a time when there are more efforts to arm teachers rather than providing us the support and the resources we really need to educate our students,” said Gonez. “You are the leaders of today,” she said addressing the youth present. “We need you to engage, organize, speak up, knock on doors, make calls and most especially to vote. Your values and your voices will make us a better community and a better country.”

The crowd consisted mostly of teens, young men and women. Several local high school students attended in groups and held banners displaying their school’s name and colors. The Arleta High School marching band was present in full uniform and played intermittently during the march with drums thundering, especially beneath freeway overpasses and tunnels.

The Aztec dancers present, roughly 50, were also assigned a set position toward the front of the crowd and danced sporadically to their members’ drumming.

Though the sun glared down on participants along Laurel Canyon Boulevard they received supportive honks and cheers from passing cars. A female fast-food employee with her drive-through headset in place emerged from her post at Taco Bell to take pictures and record the demonstrators.

The Aztec dancers present formed a circle and began their performance. Once it concluded, the crowd slowly dissipated.

Arleta High School sophomore Stephanie Miranda considered the experience worthwhile. “I’ll definitely come back next year,” said the daughter of Mexican immigrants, smiling. “I never thought someone like me could have this big of a voice, but this is very empowering for all students and young people.”

Though the march was initially created to advocate for farm workers’ rights, it evolved and accommodated to contemporary issues. This year’s recurring theme was no doubt school shootings, but activist and LAUSD teacher Jorge Boche believes the march serves as an educational experience on expansive, life-long activism.

“Since the beginning of our country, everything has been given to us through a struggle – by us unifying, boycotting, protesting, striking,” said the 41-year-old.

“It’s important we continue to show our children that this fight isn’t in the past. We have to prepare them now to fight not just for themselves but for others,” said Boche. “We have to be the voice for the voiceless.”