Wake Up and Smell the Hollywood 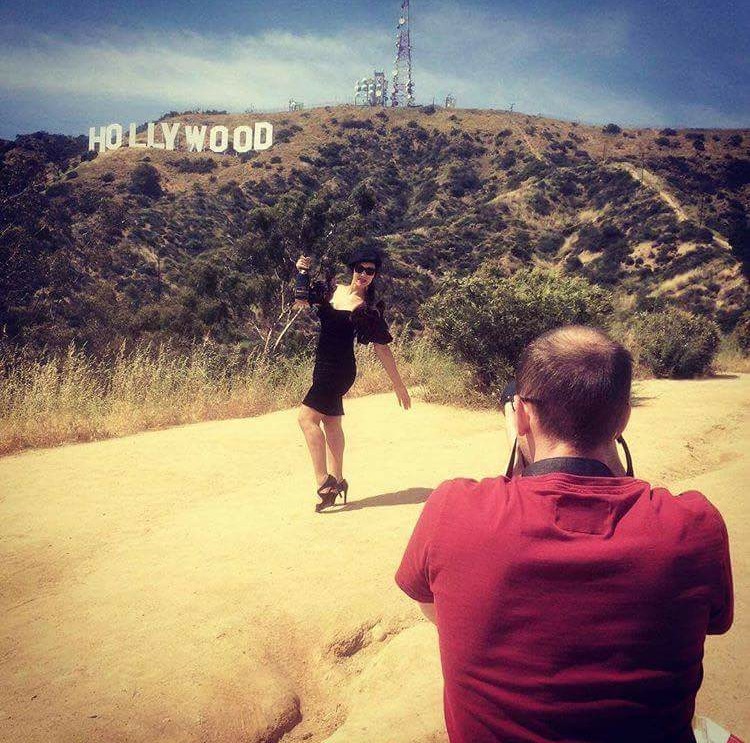 “The land of dreams, where dreams come true, everybody has a dream in Hollywood,” mused Ina Farestad, a 30-year-old aspiring actress from Sweden. Farestad has a lovely “girl next door” look, but despite some success, describes the stress of casting calls in her country. It’s very hard for actors to find the same opportunities outside of Hollywood. Anybody who wants to make their mark in showbiz has to be in Los Angeles.

The glamor of Hollywood is showcased on the big screen and beyond. It’s displayed as a star on the Hollywood Walk of Fame for tourists to see. Yet few understand the journey and struggles actors endure. How many with true talent don’t have a star?

Hundreds of people everyday move to Los Angeles with dreams of being on the billboards, but instead are faced with an entirely different animal. “Everywhere you look here it’s just movies, movies, movies,” said Shivneel Singh, an Indian who is originally from New Zealand. “Nothing about the city makes the world go around. It’s all about making art.”

He stepped off the plane only to realize that Hollywood was not what he pictured it would be. Many people’s impression of Hollywood is that it’s glamourous and angelic and don’t realize that it’s a lot of hard work in the dirt. That was the case for Singh, who has since moved back to New Zealand to continue acting.

Actors have to train. Schools such as The New York Film Academy, The Groundlings and The American Academy of Dramatic Arts host many actors and mold them into professionals ready for the stage or screen. The instruction is often not as traditional as the kind you would see in a regular public college.

Many times teachers would put actors in scenes or situations that would make them uncomfortable. For instance, they will give actors – especially female – risqué scenes in order for them to be comfortable in their own bodies, or have actors perform unusual dances, singing, even screaming, so that when it comes to being in the spotlight, nerves aren’t shaking and performing on stage is easier. Actors, even the greats, are always training.

Once actors are trained in technique, they are free to go on to auditions. Due to technological advancement, everything is done online. Websites such as LA Casting or Backstage.com host many casting calls from short films to modeling jobs. This gives beginner actors more opportunity than before because it’s easier to obtain casting calls.

Actors may submit up to 20 or 30 roles, which could take hours of work and only get a couple of auditions. “I just thought they were going to notice me right from the get-go and I was going to start getting jobs, you know like how you hear about some of the celebrities and how they were just recognized,” said Othar Richie, who was an actor for 10 years and now works as a police officer for Los Angeles county. “I thought I was going to be that awesome and then I realized when I got here, I wasn’t nearly as awesome as I thought I was and there were a hell of a lot of dudes that were as good looking or better looking than me.”

The process of auditioning can be exhausting and tedious. “Auditioning is your job but when you book it, it’s vacation,” said Chloe Busick, a 21-year-old aspiring actress. Most of the time casting directors will give actors about a day’s notice. It’s a very fast-paced society. Sometimes the location can be an hour away and actors have to juggle L.A traffic, often sprinting to auditions after working a full-time job.

Auditions vary. Commercial auditions are very different from feature films. Most commercial auditions are referred to as “cattle calls.” In these kinds of calls, casting directors will gather 10 to 20 actors into a room and go down the line one-by-one to have each person read the same dialogue. It’s all very impersonal. Most auditions take roughly 20 minutes to do, where you then wait for a call that you may or may not get from the casting directors.

Many actors are faced with moral dilemmas. In light of the Harvey Weinstein Scandal, almost no one in the industry was shocked when actors came out with allegations against the well-known producer. “As an actor and coming out here people tell you what to expect. As a female you learn to just expect it,” said Busick.

She explained that women feel like they knew the risks of getting into the industry, though it’s not right. In fact, there is a term for the kind of audition that offers roles in films, TV, or short projects in exchange for sexual acts. It’s called a casting couch. The term may be used in other industries, but originated in Hollywood.

“If you’re someone who really puts your heart and life on the line, if you pay your dues and work through all the little stuff, then that will pay off in the long run without having to do anything illicit,” said Richie when describing about his experiences with the dark side of Hollywood. “It’s about hard work and effort.” The major problem is actors succumb to an easy way to the top and give people like Weinstein a lot of power.

Many actors arrive to Los Angeles for the fame and glory, but dreams like that never last. Acting is not just about a job, it’s a way of life. Busick describes her love for acting and performing on stage. “In an age where we are interconnected and disconnected at the same time,” said Busick, “the arts are the primary thing that keeps us in touch with our humanity.”