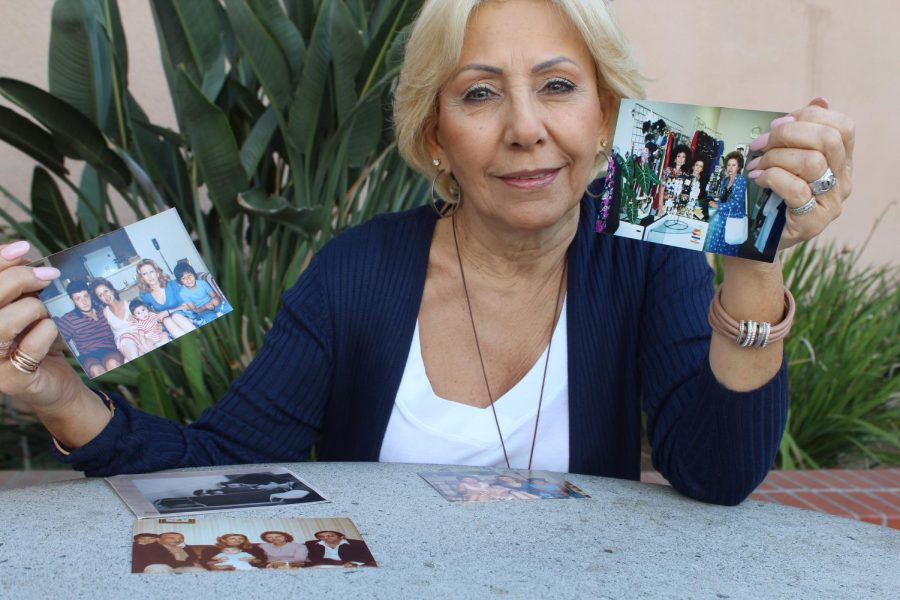 Can a life be defined by ribbons, buttons, and cuts? Some would argue it can, as they watch a master designer cutting high-fashion bespoke clothing with razor-sharp scissors for the wealthy, or a little girl who cuts a ribbon, wrapping it around her Barbie doll to style her like a ballerina or a runway model.

For Yvette Kayzakian, her life has been inspired by fabric, buttons, poetry, music and more. Indeed, her talents helped her design a pattern which laid out who she became. She’s had to hit all the available buttons for success – next, previous and pause – and though the order may have seemed random, these buttons came to define her exceptional entrepreneurial success.

Those who know Kayzakian identify her as a computer professor, but she defies the stereotypes often associated with computer “geeks.” Instead of ill-fitting or out-of-date clothing, she has the look of a fashionista. Kayzakian always had a knack for clothing design growing up, seeing colors and patterns in pieces that may have not been apparent to the average eye. “I love color,” she explained. “I love cutting. I always have an eye for a silhouette.” Her taste is apparent in her remarkably polished look. Kayzakian portrays the very picture of a CEO and could fit well in a highly-placed profession.

When she was a child, Kayzakian played with her dolls while carefully watching her mother create beautiful dresses from raw fabrics for her and her older sister. However, unlike most children, she sketched clothes on a Barbie paper doll, then cut, designed, and sewed dresses for her paper dolls that were fashioned after runway models. She used the remnants that her mother didn’t need to create her own design. “I would fold the fabric, cut neckline, cut the armholes, slant cut the shoulders and the sides for the top and then the skirt was easy – just a square that I would gather at the waistline and sew to the top.” To make them look like a ballerina, “I would decorate it with lace and ribbons and anything I could find,” Kayzakian said.

While she was pouring love into her dolls, she would dream of becoming a chemist. This love catalyzed the development of her remarkable creativity and ingenuity, which would in turn be among the greatest forces to shape her life. Kayzakian couldn’t have known what life would offer her as an adult, but as a child, the skills she was developing with ribbons, buttons, and cuts would become indispensable.

To create her models, she cut their shapes out of carbon paper, and then placed them on a cardboard backing. “Those days, in my country, there was no transparent paper. So, I would rub the paper with a cotton wool soaked in kerosene, and then before it evaporated, I would sketch the outline (the silhouette) of the outfit and then finish it by coloring with coloring pencils,” Kayzakian explained.

Kayzakian was born and raised in Iran, to an Armenian family. She attended British elementary and high schools where half of the day’s lessons were taught in English and half in Farsi. As a result, her English was very strong. “I was the highest-ranking student every year with a 4.0 GPA and graduated with honors,” Kayzakian says. “I was easily accepted into university and received a scholarship to go to Tehran University.”

Kayzakian says that for as long as she could remember, she has been able to teach English as a tutor because of the proficiency she developed. However, despite how well-read she was, her path wasn’t always easy.

She fell ill during the summer after high school. Her concerned father, who understood how strenuous the French-style school system could be, urged her to take a break for her own health. The break caused her to miss the entrance exam for the university, which left her with only one option: to attend the Pars Institute in Tehran. As a result, her aspiration to major in chemistry was no longer an attainable goal.

Before attending Pars Institute, Kayzakian was accepted to some of the most prestigious universities in the world on scholarship, including Oxford University in England, Swarthmore College in San Francisco and University of Pennsylvania, an Ivy League institution. Had she attended Oxford, she would have either majored in chemistry or English literature.

She turned down these honorable institutions because she was young and afraid to leave her family. “I was very close to my family, I was very young and wanted to be close to home,” Kayzakian says. “I wish I had the brains then that I have now. Then, I would have accepted those scholarships and pursued my higher education in chemistry abroad.” She could not have guessed that the ribbon directing the course of her life would eventually cut her from her hometown and take her to all of these places and beyond. She never would have imagined where this ribbon would wind through her life pattern and how it would lead her to push new buttons of success.

Despite being unable to chase her original ambitions to become a chemist, Kayzakian’s proclivity for languages and her creative mind still served her well – she was able to attain her Bachelor’s degree in Foreign Language and maintain her high marks. After graduation, Tehran University accepted her again. This time, she went on to receive her Master’s degree both in English and world literature. She graduated with honors and was ready to teach at the University of Tehran.

When the Iranian Revolution dictated “cut” to Iran’s Western lifestyle in 1979, all women lost their freedom to dress fashionably, look glamorous, or pursue a professional career. Suddenly, all females had to be covered head to toe, and women could only be what the Revolution dictated. Thus, her teaching career at the University of Tehran was cut short before it had a chance to begin. Kayzakian was left holding the remnants of her career. Just as when she was a child, it was up to her to fashion those scraps and remnants into something beautiful – a life that she could be proud of.

“Luckily, I knew patterns, grading, and design,” Kayzakian says, who had taken pattern classes in the French method in Iran [Achique] to advance her fashion design hobby. Unable to teach in university as she had planned, she returned to her childhood love: design. Despite her love for fashion designing, Kayzakian never imagined it as a career option; she had always considered it her hobby. Chemistry had been her dream, but now more than ever, it was clear that the pursuit of chemistry would no longer be a part of the pattern of her life.

Her husband, an architect and gifted musician, has played internationally and was receiving regular invitations to visit the Shah. Before the revolution, he often played at the King’s Palace of the Shah in Iran. Both Kayzakian and her husband were very much connected to Iranian royalty. With the revolution, the royal invitations ended, and the royal music with them.

Although she turned down Oxford’s offer years before, Kayzakian, with her positivity and determination, found herself moving to England with her family beside her. She lived there for three years, during which time she and her sister launched a clothing line inspired by European vintage styles for women. The company, called Ann’n’Eve Designers, is still open and active in the United States. Drawing upon her previous experience and training, Kayzakian created the patterns for clothes and was in charge of grading before she moved to the United States.

After moving to America, Kayzakian continued her relentless pursuit of personal experience and education. Her creativity found yet another outlet in computers. Her interest in computers has grown since the day of the Disk Operating System (DOS) and still flourishes today. Initially, her interest was sparked when she realized that computers were another tool to facilitate daily tasks and increase personal efficiency. Such efficiency is highly valued by Kayzakian, who maximizes every minute of her time to make sure no one around her is neglected.

She created her art not only with sewing needles and satin ribbons, but also with the buttons of a keyboard and the ribbon of memory inside a computer tower. She has taken a great deal of inspiration from industry revolutionaries like Bill Gates and the late Steve Jobs.

Kayzakian has never stopped learning; her resume is incredible, spanning the globe with universities on two continents and profusion across a multitude of disciplines. But throughout it all, there has been one constant: love. She keeps those closest to her buttoned up to her heart, never neglecting them in favor of her career or education.

She was hired by Glendale Community College and has been teaching there for 11 years. “She is intelligent, personable, skilled, educated, experienced, and she truly cares about the students,” said retired professor Linda Serra, the former Chair of Business Department. She initially hired Kayzakian, who struck her as very special, and she says, “I’m very glad I did [hire her].”

Ashot Movsesyan, a colleague, senior lab technician, and computer science teacher at GCC praised her teaching. Movsesyan described her as a dedicated teacher who loves her job and “donates her time to her students” in order for her students to excel. She teaches and works as she lives: with pleasure.