Breaking Bread: How One Student Launched A Business 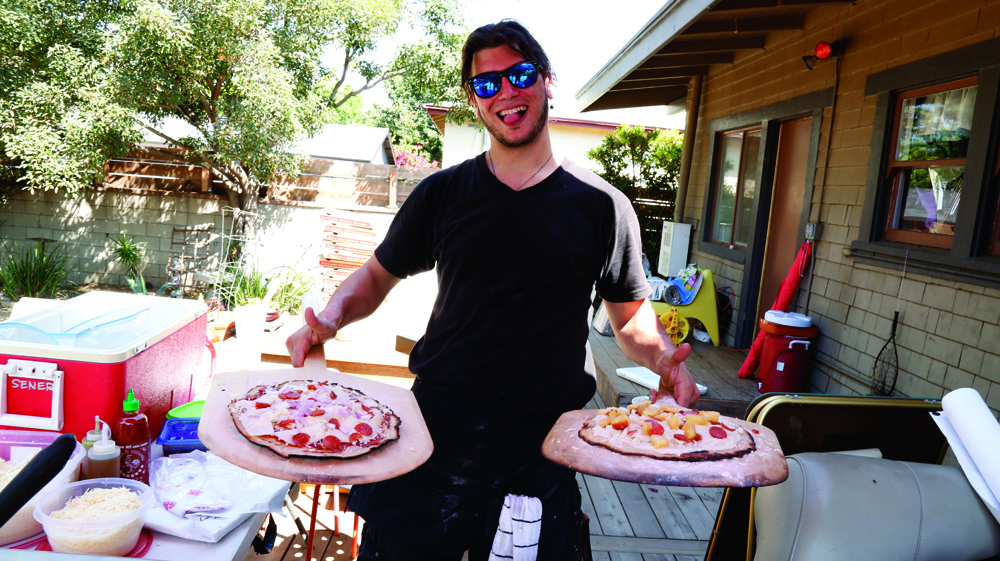 I’ve known Nick Bardawil since 2009. He represents the modern college student who is going to school and working. The difference? He’s working for himself.

It’s early morning. The pepperoni is sliced. The dough and sauce are being put into the freezer. Out back the wood is being chopped to be fuel for the oven. Nick Bardawil, a 25-year-old chemistry major, is ready to roll out and move his business forward. It’s a long time coming, as it hasn’t always been easy for him.

Bardawil was arrested for drug possession in Texas on Dec. 7. It was a road trip gone wrong, he said. When Bardawil returned home to Glendale, Calif., he realized that he had to correct the path he was on. With a little help from his friend, Cale Hanks, Bardawil began to fix his mistakes and move toward a more positive future.

Bardawil and Hanks put their money together to open up a business. “Right away we knew [that] we wanted to run a food truck,” said Bardawil. “So me and my friend [Hanks] went over some ideas. Taco truck, Italian, Kebabs. But then, one day, I brought up the idea of making pizza pies that were all organic. I had noticed that at every party or event I had been at, there was someone who always wanted pizza. My friend agreed. We started right away.” Third Eye Pizza Pie Co. began serving orders January.

“It’s working with your best friend” suggested Bardawil.  “We have a strong work ethic. If we have a job and the job is not done…then we are not done.”

The crew of Third Eye Pizza Pie Co. is waiting in anticipation for the verdict on Bardawil’s court case. The future of the business could change depending on the ruling.

Before he became his own boss, Bardawil had gained experience working from restaurant to restaurant. He had operated in diners, pho restaurants, and vegan establishments. His duties have varied from busser to waiter, to manager, to sous chef, to head chef.

“I would work as many hours as I could to make as much money as I could,” explained Bardawil.  At one point, I was the only cook that they had employed. That made me work harder in order to keep someone else’s business open in order for me to still make an income. But because of those hours and experience, I was able to collect the capital for me to be able to start my business.”

Third Eye Pizza Pie Co. does have its limits, confessed Bardawil. Due to the number of ovens and the number of their workforce, the business cannot pump out pizzas at an industrial level. However they took this weakness and turned it into something profitable. Realizing that they cannot meet the demand on a street corner, they knew that they would have to work private events. Third Eye Pizza has served clients from the Rose Bowl to EDM and Rave events.

Bardawil and his crew also care about their community. After working a wedding, they had satisfied over 130 people with seven different varieties of organic pizza. However they still had a lot of ingredients left after the event, noted Bardawil. “This [wedding] was our fourth biggest event that we’ve worked so we had packed a lot,” he said. “Just in case.”

On July 20, early in the morning, Bardawil prepared the outdoor oven make pizza for the homeless. He had asked me to come and videotape the Third Eye method of pizza making. By the middle of the day, Bardawil and his friends had created over four-dozen organic pizza pies. The pies were loaded into their truck and given out to the homeless in Eagle Rock and Downtown Los Angeles.

“We are thinking about creating a dessert menu. Pies made with Nutella, berries and whipped cream,” Bardawil said excitedly.

Despite the limitations of the past, Bardawil is ready to expand his company.