Aviation and Space Club Hangs at the Hangar 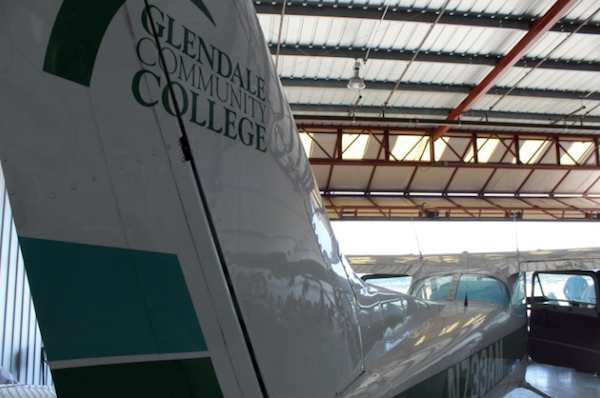 The cramped single-engine propeller plane shuddered in the hot San Fernando Valley winds as we made our approach toward the runway.

“It’s a light plane so it gets tossed around quite a bit,” said pilot Edwin Sahakian, flight instructor for GCC’s Aviation Program. “It’s more like a ride at Magic Mountain than one in a plane.”

Our Cessna 172 Skyhawk made a rough one-hop skip on the runway at Whiteman Airport before touching down and coming to a crawl 2,000 feet later. We taxied over to hangar M7 so the next crop of excited attendees of Glendale’s aviation program open house event could get their own flight-induced adrenaline rush.

The GCC aviation department open house was held on May 21 as a way to showcase to the Glendale community what the flight program is all about.

“Well that was awesome,” said Arthur Poghosyan, fellow passenger and open house attendee. “Especially your first time getting up there in a small plane, it’s been a dream of mine for awhile.”

Our plane only flew three quick “patterns,” essentially a medium-sized loop around the airport with its own take-off and landing sequences, but it was enough to get a feel of what flying is like — which is exactly what was planned.

“We love to get people up there, especially kids, and give them a taste of flying,” said Chad Krueger, President of the GCC Aviation and Space Club and one of the organizers of the event, “it’s a great way to get them hooked.”

Hooked, and hopefully into the aviation program at Glendale, which is always looking for promising new recruits.

The pilot training program is the more popular of the two. It is a four-semester program that offers a combination of ground classes and flight labs to get students ready for their private pilot or commercial aviation license. The array of classes offered includes meteorology, navigation, aircraft structure and aerodynamics, radio procedures and flight regulations as well as many others.

Glendale’s lab portion is held at Whiteman Airport, an inconspicuous landing strip 17 miles west of Glendale’s campus in Pacoima, where students can log some real-world hours in  college-owned aircraft.

“Whiteman [Airport] is perfect, there’s hardly any other air traffic to deal with, which makes it ideal for training,” Krueger said.

A low-pressure environment for student pilots, the airport also has its own air traffic control tower, giving students valuable experience with proper take-off and landing protocol. To the north you have Santa Clarita, which, according to Krueger, is perfect for practicing “stalls.” To the west you will find Van Nuys airport, a much busier hub of airplane traffic, which offers an additional dimension for aspiring pilots.

About 150 to 200 people participate in the program currently, according to Robert Newman, another flight instructor who has about 30 years experience flying. He said most of the students decide to go fly commercially once they graduate.

The program is equipped with an on-campus FAA-certified flight simulator, three Cessna 172 Skyhawks, its own airport hangar to house the training planes, and a handful of flight instructors with thousands of flight hours logged between them.

“It’s a very great program with instructors that know what they’re doing” said Harry Artsvelian, who attained his own private pilot license in 2013 through the aviation program and now flies out of El Monte airport with a private flight club.

Mr. Artsvelian may have undersold just how good these instructors at Glendale are. The combined résumé of the program depth chart rivals the best of them.

Among the staff, you have: a retired police helicopter pilot, a former airline pilot, a retired U.S. Customs pilot, an international private charter pilot and another who is licensed to fly most Boeing airliners.

All of this instructional talent at a fraction of the normal cost, too. “The Glendale program is probably the cheapest in Southern California,” Kruger said. “You can easily save thousands of dollars by going through here.” The cost of GCC’s program is $8,000 while most private programs will charge you anywhere from $10,000 to $12,000.

The website Pilot-Colleges, which ranks college flight programs on a number of categories, places Glendale’s program at No. 7 in the state of California and 97 nationally. That ranking is rather impressive, considering most of the schools occupying the list includes major universities with vastly superior program budgets.

The price, availability, hands-on experience, and the wealth of knowledge to be cracked open from the passionate instructors makes GCC’s aviation program the hidden gem of the Jewel City.