Masiela Lusha: ‘Not Just an Actress’ 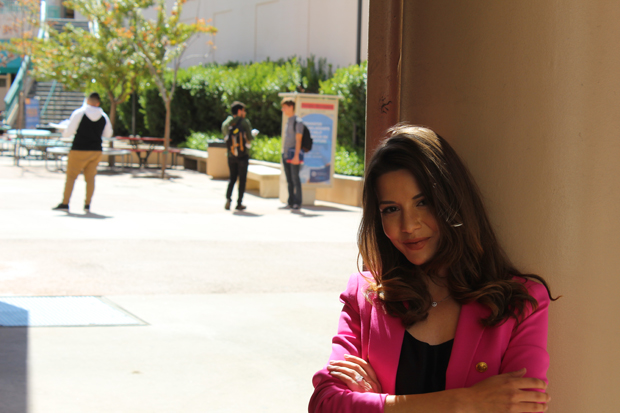 Glendale College alumna Masiela Lusha, actress poet and humanitarian, outside the San Gabriel building after an interview with El Vaquero. Lusha is best known for her role as Carmen on “George Lopez.”

For Masiela Lusha the road to success began in Albania, led to Glendale Community College, then onto an award-winning writer and actress, to a global humanitarian.

With a total of eight published works, honing four languages, and an ambassador for Prince Harry’s charity, Lusha keeps busy. From her big break on “George Lopez,” she recently filmed a Lifetime movie “Forgotten Evil” and just wrapped her second  “Sharknado.”

It may seem like a lot to keep track of, but it all makes sense to Lusha, just like her outlook on “Sharknado,” a fan favorite that also has endured jokes.

“That’s the beauty of Sharknado, produced and directed in a way that’s serious, but doesn’t take itself seriously,” Lusha told El Vaquero during a recent visit to campus. “When people make fun of it, that’s the byproduct we embrace. It’s a weird dichotomy.”

It’s this diverse experience that makes Lusha stand out as a GCC alumna, said Lisa Brooks, executive director of the Glendale College Foundation, an organization that works to support facilities and programs.

“I was impressed by this young woman by all her accomplishments not just as an actress but as a poet and humanitarian,” Brooks said. “We contact alumni who have gone on and done wonderful things in the world, and Masiela was one of those people.”

Lusha migrated to the states as an Albanian refugee at the age of 7, coming to Michigan via Hungary and Austria. She was sponsored in the United States by her great uncle.

One of her earliest memories is of the bus ride out of Albania, where the government at the time was under communist rule. While riding with her mother to Budapest for freedom, she noticed the American Red Cross volunteers who had been informed of a possible bomb on the bus, and vowed to protect everyone.

“To sense that ability of completely unique culture, and expectations and people who you’ve never and don’t look like you, who put themselves on the line for you, because of a human cause that’s overarching any culture, that defines you,” Lusha said.

She credits her long journey from Albania, with stops in Budapest and Vienna, as her roadmap for both her humanitarian and creative work.

“I have been helped in so many ways,” Lusha said. “I’m not going to do a project that implodes society, or produce a piece of writing that will impact in a negative way. I think I’ve been given too much, and am always striving to make up for it.”

She moved to California and at age 15 enrolled in Glendale College, later transferring to UCLA, majoring in creative writing.

“GCC has a sense of roots I can hold onto that I didn’t have as a kid,” Lusha said. “I have to say it did open all the opportunities for me. I was able to go to UCLA, pursue my love for literature.”

Recently, she became an Ambassador for Prince Harry’s charity, Sentebale. She went to Africa to visit orphans to experience their daily struggles.

“That was life-changing,” Lusha said.

As a poet Lusha got an early start, publishing two books before graduating from high school. She has been awarded as one of the top ten talented poets of North America and received public recognition from former President Bill Clinton.

Poetry became her universal outlet for her feelings and experiences. Her mother recited literature as bedtime stories, and with a celebrated Albanian poet as an aunt, “I feel that was the fabric of my existence before I even spoke my first word,” Lusha said.

At 12 years old she dedicated her first poetry book to her seventh grade English teacher, whoencouraged Lusha to embrace the English language and to recite the poetry in front of the class.

“I was mortified, but when I tried it, the embrace I received from the class transformed my trajectory as a poet,” Lusha said. “That was the moment I thought this might be good, and it was the only validation I needed.”

She pursued theater at a young age in Michigan, but never thought beyond those amateur roles. Then one day a talent agent searching the Midwest for new faces came across a young Lusha. After searching from 600 hopefuls, Lusha and three other girls were on their way to Los Angeles. She never looked back.

The day of her audition for “George Lopez,” Lusha fell ill and her mother contemplated if she should attend. With no hesitation Lusha persisted, went through the audition, and received a callback.

“It was the first time ever I auditioned for a sitcom,” she said. “It was different because people would laugh in the middle of my lines, but yet I felt intuitive. And it felt this was the right thing. I didn’t know how I sensed it, but I knew this was the direction I needed to go.”

After getting the life changing role of Carmen Lopez on the syndicated series, the writers crafted her character towards Lusha’s real-life personality and passions. Carmen became a poet on the show and certain love interests reflected on her own life. “We were the original autobiographical sitcom,” she said.

Stepping away from the film’s outrageous concept  Lusha describes the dynamic of family and dedication on set.

“What compelled me to accept this, is that it’s a family unit and does elevate society in a way that encourages certain dynamics within family,” Lusha said.

Lusha currently stars in the international Lifetime film “Forgotten Evil,” a psychological thriller written, directed, and produced by Anthony C. Ferrante from the “Sharknado” franchise. She plays a woman who awakes with amnesia.

From the struggles of fleeing her homeland to accomplishing the wildest dreams, she recollected about her second home, GCC.

Lusha embodies the advice she tends to always give about the college.

“Embrace every single opportunity you have here, there are so many prospects here,” she said. “ GCC gives you the advice ‘you can do it.”