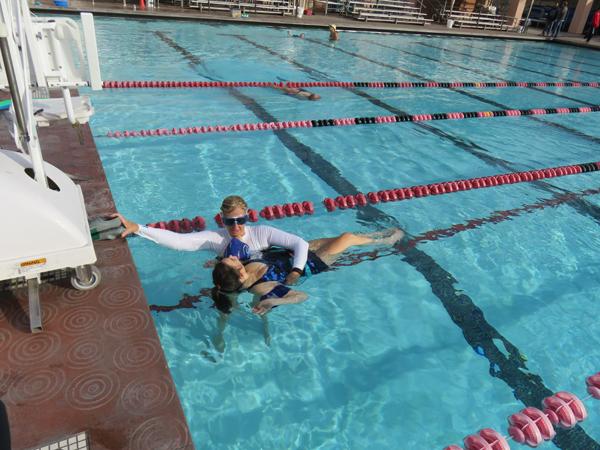 Dr. Lee Parks refuses to believe that anything should get in the way of young people participating in healthful physical exercise and that it provides a good platform in which they could perform their academics.

For 25 years, Lee Parks has been an instructor in the adapted physical education program at Glendale College, which focuses on physical activities for students with disabilities and personalizing it based on each individual’s needs.

“I offer them an opportunity to learn how to take care of themselves physically within their own limitations,” Parks said. “We devise a personalized program for each student that comes to my class. We try our hardest to get the right program for them.”

She graduated in 1974 from the University of New Mexico with a master’s degree in adapted physical education. At that time, schools were segregated and students with disabilities could not enroll in public schools.

In 1975, when the Department of Education passed Public Law 94-142 that “guaranteed a free appropriate public education to each child with a disability,” Parks worked with public schools in Albuquerque to set up adapted physical education programs from elementary to high school.

In 1981, she was accepted at USC and moved here to get her doctorate. Afterward, she worked as an assistant instructor at Cal State Northridge. She was also a consultant for the Los Angeles Department of Recreation and Parks, where she worked with architects to redesign recreation centers for accessibility.

But her passion has always been teaching. She applied to GCC where she started out as a part-time instructor and later on was hired full-time to develop the adapted physical education program.

“At the time that they hired me, they had one physical education teacher teaching a class on Tuesdays and Thursdays for one hour and that was all they had,” Parks said. “That was basically a weightlifting class that they had going and they wanted a full program.”

The first course she started was adapted aquatics, which is a swimming class. Since the college doesn’t have its own pool, they had to rent space at the Rose Bowl Aquatics Center in Pasadena.

“I firmly believe in the importance of physical activity and health promotion throughout the lifespan, regardless of ability,” APE Instructor Laura Matsumoto said. “The students who I have worked with over the years have enriched my life beyond words. I get the opportunity to work with a dynamic group of students who are not willing to let the challenges they face keep them from living, learning and participating in their lives to the fullest extent possible.”

For the past five years, the students have also given back to the aquatics center by participating in an annual swim-a-thon to support the Rose Bowl Aquatics Center Annual Fund drive. The students would find donors willing to pledge a certain amount based on the number of laps the students can finish.

“Some of the students come from low or no income backgrounds and yet they work hard to find sponsors to support them during the swim-a-thon,” Matsumoto said. “This is an important experience that allows students who are oftentimes reliant on social services to feel connected in giving back to the community.”

Over the years they have started many new classes including a self-defense class that teaches tai-chi, an adapted cycling class and a class for sports and recreational activities in which they teach different sports during the semester, including basketball and archery.

Parks shared a story of one female student with quadriplegic cerebral palsy who is in her aquatics class. They had to put on child water wings, a floatation belt and fins before she could go into the pool.

“She can’t use her arms at all but she is on her back and she’s just kicking her fins,” Parks said. “She does about 60 laps in the pool like that. It is the only time she gets out of the wheelchair – the only time that she is not held or touched or enabled by somebody else. It allows her to experience freedom, independence and self-reliance.”