Hollywood Parade Kicks Off the Season 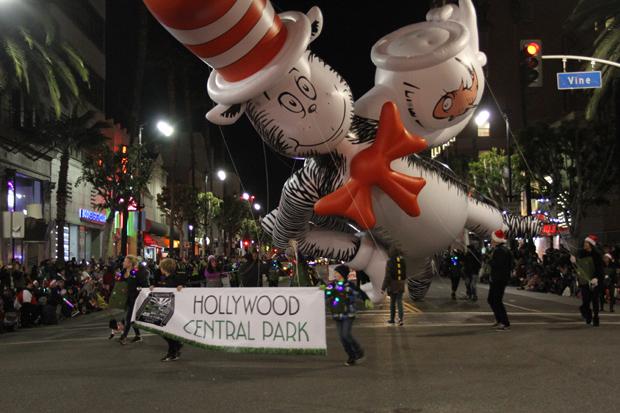 THE CAT IN THE HAT: A giant balloon featuring the enduring character of Dr. Seuss floats down Hollywood Boulevard on Nov. 26.

Police cars, floats, and Santa and his elves filled the Hollywood streets celebrating this upcoming holiday season of love fun peace and harmony.  Many families gathered and cheered as streets were blocked off. Some relaxed in lawn chairs with quilts covering their laps, sipping hot cocoa and coffee, as they excitedly awaited the parade to begin.

Guests such as singer and actress Olivia Newton-John, the grand marshal attended in an all-white Oldsmobile. Cast members Young and the Restless,Days of Our Lives soap operas. Along with many others waved to the crowd from the back seats of their fancy convertibles as fans yelled their names.

This year it was said to be one of the coldest years for the parade. There were runny noses, loud screams and smells of hot sausages being cooked.

Local resident Bill Mock was there. “I have been attending the parade since I was 5 years old.” said Mock “It’s only right that I follow the tradition with my wife and twin girls.”

Miss Hollywood National of California with her equestrian skills, gracefully waved to the crowd from her atop brown horse. The Parade had a Multitude of sponsors including Toys for Tots, an organization that takes up a collection for coats, toys etc for the less fortunate children to give back to the communities around the holidays.

“This year was a success, an even bigger crowd with many laughs and cheers,” said Laura McKenzie, co-host with Erik Estrada. They have hosted this event for seven years in a row.

” I love to see the many faces and walks of life gather together to enjoy a celebration of Christmas,” Estrada said.