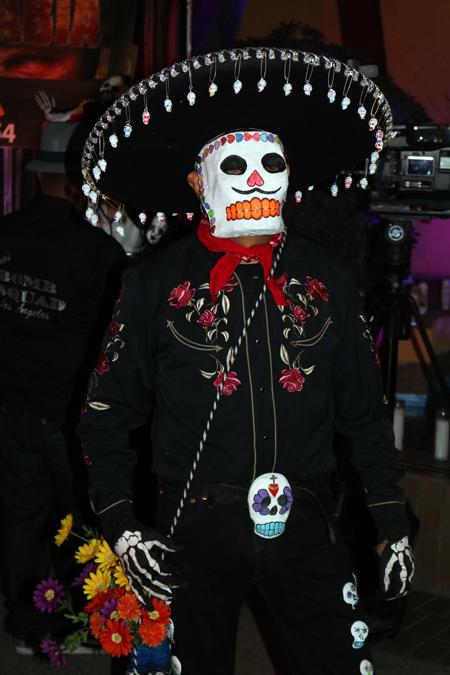 TO DIE FOR: Saturday’s Day of the Dead event is Sandra Chaidez’s seventh year attending - the biggest ever.

The first thing you see when walking through the doors to El Velorio, a Day of the Dead dance party with a mariachi theme, is an ocean full of people dressed in costume, their faces painted as stylized skulls. Hanging lights illuminated the entire room.

Booths allowed patrons to buy everything from shirts with skull prints, jewelry, and basically any kind of merchandise, including one-of-a-kind arts and crafts with a skull theme. The roof tile paintings were especially charming.

The 21-and-over event offered food and drinks for sale, and “designated drivers” were offered a free Shasta Zazz.

Two stages kept the entertinment going for hours with musicians, disc jockeys and folkloico dancers. Next to one of the booths the event coordinators set up a public altar to celebrate and remember the dead, with a smaller, personal altar on the other side.

Trouble achieving the calavera look? Not a problem. 15 body art technicians were available to paint your face or body in a lighted room before returning you to the party.

One of the visitors, Sandra Chaidez, has been on all seven El Velorio events and she also goes to everything happening around it. She said that this year’s event is much bigger than the years before. For celebrity watchers, Mike Flores (known as the actor from “Let’s Be Cops”) attended and posed for pictures with some lucky visitors.