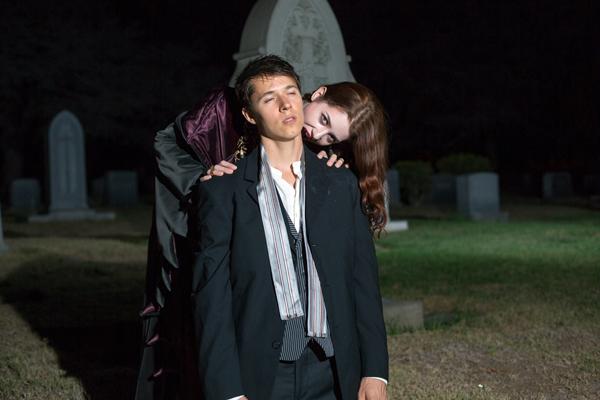 Three horror  plays, a cemetery and a mausoleum… at night, what could possibly happen?  Right? The scene is talent night at Camp Mountain View and the audience will be taken through three classic horror stories.

However this is not a typical stage play, each story takes place in different parts of the mausoleum and cemetery across the street. The story leads the audience through different areas, while still being a part of the story. These walking plays create a level of interaction as you go room to room.

“I loved it and it was so exciting” said Cassandra McKimson, an attendee of “Wicked Lit.” “ It was also pretty scary.  I ran ahead of my friend to catch up to the story guide and left her in the mausoleum by herself.”

She was not the only one, throughout the various plays audible gasps and whispers were heard throughout the audience. The wide-eyed audience clearly had a lot to take in with the amount of details built into each set, creating a creepy and disturbing setting for the horror stories.

Before talent night starts, the camp director and counselors greet the audience. The camp director is a vampire and the counselors are an assortment of creatures, each with their own backstory. They all have their own tents and activities to check out independently during the two intermissions.

Talent night features “From Beyond”  by H.P. Lovecraft, a story of an invention gone wrong; “Anansi,” and “The Demons,” adapted by Jonathan Josephson, a story of trickster demons out for revenge; and “The Shadowy Third,” by Ellen Glasgow the story of an insane, hallucinating woman, who actually might be more sane than anyone in the house.

It was seven years ago, that three friends started a small stage production that changed the way audience’s experience literature by interacting with stories rather than watching from afar.

Wicked Lit started out small, but grew to successful heights over the years. The production first  started at Greystone Mansion in Beverly Hills, then moved to their current residency at Mountain View Mausoleum and Cemetery in Altadena .

“It’s amazing how many ways, you can transform a room,” said Jeff Rack, one of the founders, about creating each set. “We use the space in a different way.”

With a lighting designer for each show and two sound designers plus a full cast, the show is a full production.

The stage is set in a mausoleum, the fear clearly comes through in the colors and characters throughout the scenes.

Tickets cost $50 and comfortable shoes are recommended. The run time is approximately two hours and 45 minutes, the pre-show starts at 7:15 p.m. “Wicked Lit” runs until Nov. 12 and is located at 2300 N. Marengo Ave., Altadena.