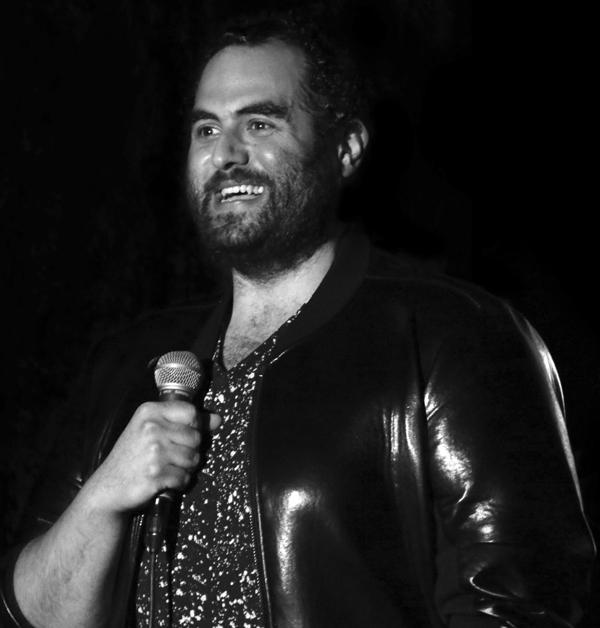 “I’m not racist, I’m just racy” is the tagline of Graig Agop, a GCC alumni who is making his way as a stand-up comedian in Los Angeles.

He has a dark, twisted sense of humor, preferring things to be shocking and inappropriate because he thinks, “that is when it’s more alive.” He delivers punchlines with a poker face that makes one think twice if he was joking or not.

“Before we go any further I just wanted to say that though I have never been inside a black woman before, that I have a black woman inside me,” he said. “Her name is Loretta and she’s a 46-year-old diabetic that loves potlucks and saying things like ‘I a pre she ate shoe’ which means ‘I appreciate you’ for all you white people.”

“I can understand why some people might get offended by his sense of humor, but when you’re at a comedy show, being ‘polite’ goes out the window,” said Nairi Varteressian, one of Agop’s closest friends. “I think Graig’s style is meant to shock you. I love that he has his own style and he’s not afraid of pushing people there.  We need to be pushed past our comfort zones so that we can grow and learn more, not only about others but also about ourselves.”

Agop started out in Glendale College with a passion for photography and joined the El Vaquero team as a photographer. When he won awards at the Journalism Association of Community Colleges conferences and was encouraged by staff members, he decided to trade his camera for a pen.

He started writing for the paper, where he eventually got his own column and was given the freedom to explore. He covered anything about pop culture and entertainment, putting a twist in his stories by inserting his own brand of comedy.

“I wrote an article about the Jonas Brothers called ‘Congratulations Disney, Your Fruitcake Is Delicious’ and the editor had to change his email,” Agop said.

He graduated in 2013 with an associate’s degree in mass communications that led to a career in marketing.

“I feel like I got so much from my time at Glendale College,” he said. “I mean I spent 8 ½ years because it was impossible for me to meet my math requirements. I kept accidentally graphing swastikas in pre-algebra. It may have been a cry for help but it made me who I am today.”

He and his brother, Hovsep Agop, started their own online publication called “Idol Magazine,” a satirical magazine featuring entertainment news.

Last year, his article on Gabourey Sidibe losing 179 pounds while horseback riding went viral. It got 400 million views before his brother had to take it down. It was featured on “The Wendy Williams Show” and people even bought domain names of the fake diet he created.

He also dabbled in writing scripts for the big screen. Agop  wrote a screenplay with his brother called “Black Magic,” which is about an aspiring entertainment journalist, Colin Laferty, and his best friend Tabooky Tabucky Green III, the heiress of ranch dressing. He got it into Jonah Hill’s hands but had a hard time finding a producer to finance the project.

“That’s why I love stand-up,” he explained. “You can write something earlier that day and perform it that night, and you don’t need $8 million to do so.”

He started taking improvisation classes with the Upright Citizens Brigade where he improved on his craft before taking it to the stage. His first show was at The Comedy Store, front-lining for comics such as Chris D’Elia and Iliza Shlesinger.

“I’ve always known comedy was Graig’s path growing up, and stand-up has been a great testing ground for his ideas,” his brother said. “He’s a natural entertainer and I’m looking forward to what his brain comes up with next.”

He has only been in the business for about a year, but has made headway in launching his career as a comedian.

“I realized early on in life that if you are not feeding someone, making them laugh or getting them off, you’re just wasting their time,” Agop recounted. “I am a terrible cook and have had signs of pre-rheumatoid arthritis and you can’t get anyone off with that. So I had no other choice but to be a comic.”

He confessed to having a lot of anxiety going onstage, but he owes it to a great support system – his brothers, aunts, friends, and co-workers – that he is able to pursue this career path.

“They have all pushed me to work harder, get it together and keep it together,” Agop said. “I learned that you have to be your own agent and your own manager, and you have to make things happen for yourself. You also have to work hard. I have great work ethic. I put in an hour or two a day and the hard work is what pays off.”

Graig Agop will be at The Comedy Store’s Main Room at 7 p.m. on Oct. 22 and he performs at the HaHa Comedy Club every month for Armenian Nights. Tickets are available on his website: www.graigagop.com