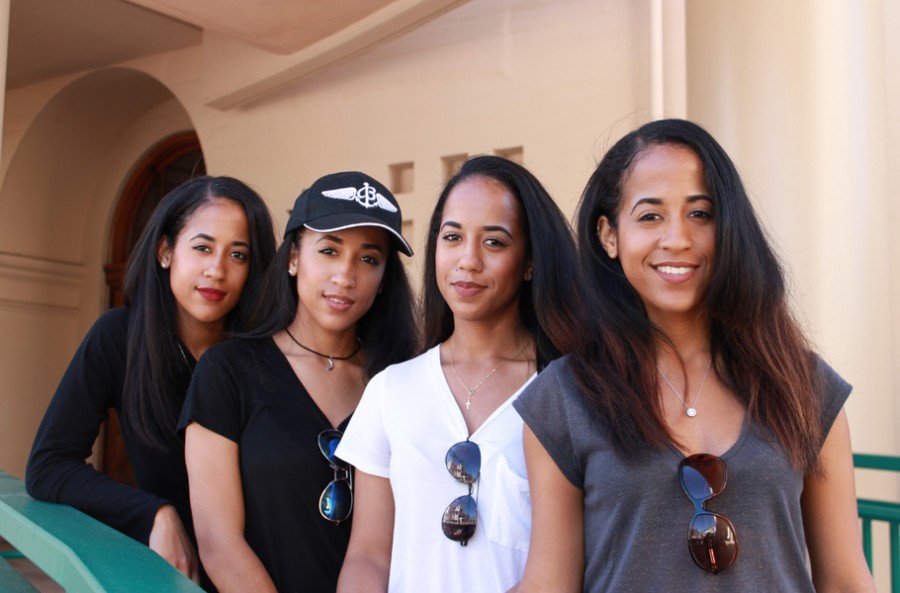 Born in the Bahamas, these exotic looking, charismatic, almost 21-year-old young ladies, will make anyone do a double take.
Jodi, Janelle, Catherine and Christina Pyfrom are identical quadruplets — three of whom are starting their first year at Glendale Community College. Together they form the pop music group 4th of May, though they were born on May 11.

Their subtle differences are not immediately distinguishable to the untrained eye. One must spend a bit of time with them when they’re all together to take notice of their slight distinctions.
All four have dazzling smiles and a sparkle in their brown eyes. Jodi wears a delicate nose ring on her right side and Catherine has a tiny mole on her right eyebrow. Christina and Janelle have lightened tips on their hair with just enough golden color variation to be able to tell them apart.

The sisters are dedicated to pursuing careers in the entertainment industry, but they still realize how important it is to focus on education as well.

Jodi is majoring in music, Janelle is focused on business, and Catherine is a film major. Christina works on songwriting at home and will likely attend GCC next semester if her schedule permits.
“It’s difficult to go on calls and attend class,” Jodi said. “Certain classes do not allow for more than two absences so those classes unfortunately have to be taken at another time.”

Their parents, Craig and Joanne, have continuously provided a stable environment for them and remain supportive, even from thousands of miles away. They are still in Nassau, where the girls grew up, but have not allowed the distance to come between them.

“We were raised with a strong understanding of ethics, morals and values,” the sisters said.

“Our involvement helped to instill in them qualities that were, and still are, necessary for them to become independent and responsible individuals,” Joanne said.

The struggle of managing their careers as well as an education has not been their biggest challenge by far. The girls have had to face the complications of being multiples since they were in utero. They were conceived from one egg that split four times naturally.
According to the Multiple Birth Foundation, spontaneous conception of quadruplets is extremely rare and only happens in one in 571,787 pregnancies worldwide … most of which suffer complications and do not reach full term.

A major risk factor for a pregnancy with multiples is a lack of space in the mother’s womb for proper development.
Not only were the girls born two months prematurely, three of them were born with a condition called craniosynostosis. Their skulls fused and did not have a “soft spot” to allow for growth and requires surgery to correct.

While there were risks and concerns, all three surgeries were a success and the girls pulled through the potentially life-threatening condition, much to the relief and delight of their parents and family. The girls had to stay in the hospital for several months, but were eventually able to go home and begin family life.

Their mother considers the fact that they all survived the pregnancy to be nothing short of a miracle. She was initially told that she was having triplets and that they were all in one sac.

She and her husband later discovered there were actually four fetuses, which further complicated the pregnancy. With prayer, bed rest, and a month in the hospital, she managed to carry them for seven months before delivering them via cesarean.

“It has been a long road with many challenges, but with the grace of God they are here today, healthy and talented,” Joanne said.
“Raising four children of the same age at the same time was very challenging and difficult. These challenges forced us to become creative, organized and focused,” said Joanne. “It was, and still is, very expensive. However, we believe anything, and everything, is achievable with vision and planning,”

The siblings enjoy a strong natural support system within their family unit. “Always being together makes it easy to have someone to talk to and share feelings with. We stick together through everything,” they said.

Much like other multiples have reported, the girls say they can pick up on each other’s vibes and often feel one another’s stress or anger.
When this happens, one will encourage the other to calm down. Catherine is said to be the peacekeeper in the group, diffusing disagreements when necessary, but for the most part, they all get along and are best friends.

Janelle handles the business side of things in the group, and they all agree she carries the most stress as a result. Jodi is the oldest by two minutes and the most aggressive one. Catherine is the most grounded, and Christina is a creative girly girl. In an effort to battle the demands of their hectic lifestyle and combat the stressful conditions associated with long work hours and studying, they all work out regularly and take it seriously.

“We love to go to the gym. Physical fitness and being healthy is important to all of us,” they said.

They love to listen to the boy band Backstreet Boys and in an ideal world would love to work with artists like Rihanna and Beyonce.
One of their guilty pleasures is eating dark chocolate and they all have the same dislike of insects.

“We enjoy relationships that don’t have a lot of drama,” they said. “And we tend to look for emotionally secure friends that can appreciate a mature friendship.”

“I would like people to know that like everyone else I’m an individual and I love to meet new people. Music is a passion of mine and I love anything to do with it. I’m very easy to talk to and love to hold conversations,” said Jodi.

The girls have multifaceted personalities. There is deeply spiritual side with an overall sense of peace and calm about them when discussing personal matters, then they quickly light up when a conversation becomes juicy. They also have their individual strengths and abilities while maintaining a obvious cohesiveness when they are all together. They seem to move as one when they’re sitting in a row and when it’s time to perform, despite their individuality.

“While growing up Jodi and Janelle have taken a more dominant role among the girls,” Joanne said. “Jodi is more dominant than Janelle, while Janelle is very analytical. Catherine is a very happy individual who has a very lighthearted and humorous side.”

“Although Christina sometimes appears to be rather quiet, she is very observant and assesses a person before opening up to them. Christina grew up as the one who was always protected by her sisters. I encourage them to speak their minds and voice their opinions, but to do so in a respectful manner. I always let them know that it is not what you say but how you say it.”

Early on they were noticed for their striking resemblance and the rarity of being natural identical quadruplets. The natural harmony that exists between the siblings surfaced when they were just 6.
They began singing together and as they matured their natural talent began to shine through. At the age of 14 it was clear they were destined to be in the spotlight and they created the singing group called fourever1. They have made several music videos and makeup tutorials and achieved some recognition and success, but due to their location in the Bahamas, it was limited.

One of their fondest memories was performing in Nassau for Randy Jackson of American Idol. They eventually signed a contract with him, which is what forced them to leave their island home and change their professional name.

“We really miss home and our family, but we have to make sacrifices if we want to further our careers,” they said.

The sisters say one of their long term goals is to eventually own their own record label. They would like to make it easier for future artists to be developed. Being well aware of the financial risks involved, they would still like to assist aspiring artists overcome those obstacles.
“In the music industry artists have to have everything in order and be ready to be marketed, no one wants to put money into development which is the hardest part,” they said. “We have to pay our own way for much of what we do. Thankfully we have the support of our parents.”

In addition to being able to light up a stage with their energetic personalities and strong stage presence, the girls enjoy a playful sense of humor as well. They have several prank videos online demonstrating their desire to have fun with their ability to easily trick unsuspecting victims. It’s all done in good fun and ends in laughter and surprise as those being tricked are relieved to learn their eyes are not playing tricks on them.

Maintaining their individual identities while being one of four identical girls also has its challenges. Being recognized as multiples is part of their marketability and appeal. They all wear their hair the same way to enhance the effectiveness of being identical. This can work both for and against a young woman seeking acknowledgement in her own right.

One of their new friends on campus, Jeff Davis, a second-year student majoring in film, said he really enjoys his growing friendship with all four of the girls.

Davis said he met all four sisters at once in the bookstore when three of them were buying their books for the semester.
“They have remarkably different personalities and are easy to talk to,” he said. “They have a modest upbringing and are well mannered, as well as the fact that they are extremely driven. Three of them are striving for different degrees all with the same end goal in mind: to run a music production business together.”

After spending a little time with them it’s easy to recognize and appreciate their individual personality traits.

The warmth and sincerity that exudes from the four young ladies is perhaps one of their most attractive attributes. It is only outdone by their Bahamian accent, which gives their voices a distinctive quality allowing them to captivate their audience with a style and grace that is all their own.

“They have taken a very bold step and a leap of faith by moving away, on their own, to pursue their dreams,” Joanne said. “They have remained focused, and with hard work and determination they will succeed.”