Texting Versus Textbooks: What do Students Read Most? 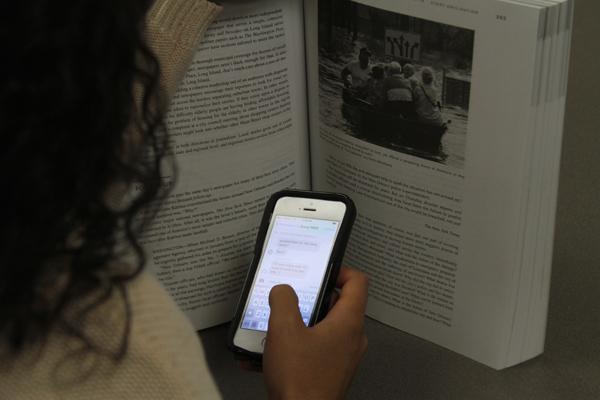 There’s no doubt about it, most college students are addicted to their cell phones. They rarely forget to check to see who has texted them before, during and after class.

But, is the same level of time, energy and interest invested in their textbooks? How many students will use the excuse “we didn’t have time to complete last night’s reading assignment?” However, they know which of their friends posted a picture on Snapchat 30 minutes ago.

“I know phones can be addicting, I try to give myself enough time to thoroughly read my textbooks in order to fully absorb the lesson,” said Christina Gregorian, a Glendale Community College student.

Gregorian said she feels that she balances her time pretty well and lets her friends know when she’s studying, including her boyfriend. She goes on to say some of her friends are not as diligent about putting their phones to the side and instead fall victim to a loss of study time

“I think technology helps us study as well as hinders us, but this is the time we live in, technology is everywhere now. When I was younger we didn’t have internet in our home and we had to go to the library to access it, but now it’s in everyone’s home, and on their phones, so it’s much easier to rely upon,” GCC student Chris Mardiroussian, said.

He feels he reads texts far more than textbooks and admits to skimming through some of his less challenging work. He adds that he doesn’t feel his GPA is adversely affected enough to change his habits.

Both students agree that instead being able to put the phone aside while studying, things like electronic books make it easier for students to stay on their phone and are then far more open to the distractions and temptations of texting and social media. It’s really up to the individual to be honest and decide what works best for themselves.

According to a study conducted by Dr. Larry Rosen, a psychology professor at California State University Dominguez Hills, students were observed studying for a 15 minute period during which they were told to “study something important.”

He found that students generally lose focus after about 3 minutes. On average “students only spend about 65 percent of the observation period actually studying,” Rosen said,  “That’s not exactly what you might consider ‘quality’ studying time.”

While a mobile device can be a helpful tool in looking up information while studying, being addicted to these devices can be a hindrance since it may become too big of a distraction.

The impact can lead to a lower GPA and a lack of overall academic success, according to several studies.

Dr. David Meyer, a psychology professor at the University of Michigan, observed that “under most conditions, the brain simply cannot do two complex tasks at the same time.

Listening to a lecture while texting, or doing homework and being on Facebook—each of these tasks is very demanding, and each of them uses the same area of the brain, the prefrontal cortex.”

Most students incorrectly believe that they can perform two challenging tasks at the same time, according to Meyer.

“They may like to do it, they may even be addicted to it, but there’s no getting around the fact that it’s far better to focus on one task from start to finish,” Meyer said.