Angelinos Celebrate the Day of the Dead 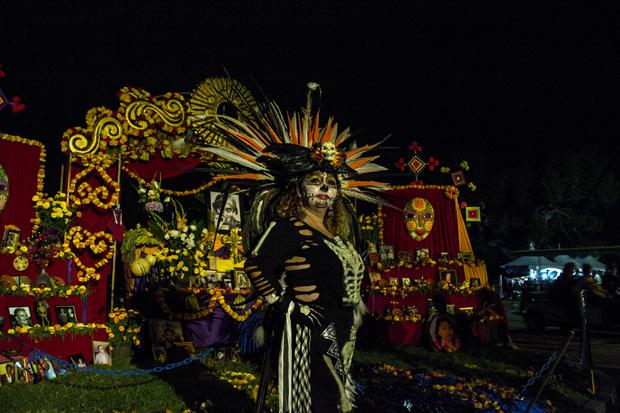 Hundreds of people with traditional sugar skull face paint flocked to the Hollywood Forever Cemetery on Oct. 24 to take part in one of the many celebrations of Day of the Dead in Los Angeles.

Dia de los Muertos, or Day of the Dead, focuses on gatherings of family and friends to pray and remember those who have died. It is believed that these rituals help survivors support their loved ones in their spiritual journey.

The theme of this year’s celebration was named after “Huichol,” who are the Native  Mexicans, living in the Sierra Madre Occidental range in the Mexican states of Nayarit, Jalisco, Zacatecas, and Durango. The altars are entered to a competition and are judged in three different categories: theme of Huichol, most traditional altar, and contemporary altar – the best of each category wins $3,000.

There were over 100 altars, created by members of the community for their ancestors and loved ones, throughout the 62-acre grounds of the cemetery. Many of the altars were covered in marigolds, which are said to guide the spirits to their altars with their bright colors and scent. Flowers in general also represent the frailty of life.

Maria Tancredi said she’s has participated in the festivities for 7 years. “I am honoring my mom who was buried here,” she said. “We usually put some kind of offering, usually the person’s favorite food.”

In addition to the altars, there were hundreds of Aztec ritual dancers in full costume who performed for the crowd.

“Today’s dance was an offering to give them a blessing to pass them on to the other side,” Palacios added.

“They say the dance calls you,” Palacios explained. “I was a lost child on the streets, a thug, until one day when I was walking through a park and I saw them dancing. Dance gives you a different view of life…It shows you another connection with the world. To me, it’s life.”

The dancers weren’t the only people dressed in elaborate costumes. Many of the attendees sported intricate Day of the Dead garb. People were encouraged to come dressed in their best “calaca,” or skeleton costumes in order to participate in the costume contest.

There were also booths offering sugar skull face paint. This is seen as a way to overcome the fear of death.

Mask wearing has been a powerful symbol throughout cultures representing the ability of humans to get in touch with their darker, more chaotic side.

“The main meaning for most artists is the base of uniqueness and artistic creativity,” said Lucy Lopez, a face painter at the festival. “I feel like the designs we do here are more modern,”

The second stage was for folkloric music, theater and dance and the third offered traditional music from the southeast coast of Mexico.

“Overall, I was impressed by the scale and the scope of the event,” attendee Jack O’Connor said.

“I think it just a different way to look at life, death, community and family. It was such a positive and fun experience.”