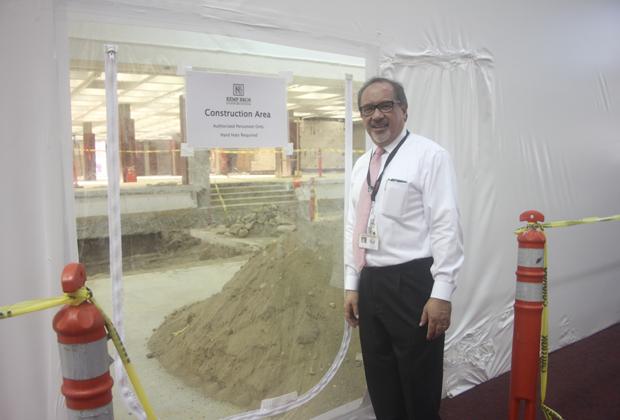 Renovations at the Central Library in Glendale started in July and are expected to be completed by January 2017.

The $15 million project will create a more modern and technologically advanced environment for Glendalians to enjoy.

“We are on schedule and things are moving like they are supposed to,” said Chuck Wike, community relations manager for the library. Renovations will take about 18 months.

The library was built in 1973. Since then, there has only been one semi-major renovation and that was in 1994.

According to Wike, the library needs updating because people’s needs are ever-changing.

The major changes are: the front door main entrance, which will be relocated to Harvard Street; combining of the circulation and reference desks; a new computer lab; Radio Frequency Identification Detection (RFID) and a stronger Wi-Fi infrastructure.

Other changes include: technology workshops, public computers, new and improved self-checkout stations, and maybe even a 3-D printer and recording studio.

Wike said that the added space and updated technology will help students study.

Cindy Cleary, the director of library arts and culture, has been working at the library for 35 years in 11 different positions. She said she loves libraries because they contribute to the community in many different aspects.

According to Cleary, the project was necessary based on the advancements in technology. She believes there is a need for more community programing, quiet study space and also interactive spaces.

She is confident that the completion of this project will help bring it all to the 21st century.

The idea for this project was a joined effort between the library committee and the city council. The main support came from the general funds and California state bond funding.

Librarian Arpine Eloyan said that many staff members — including herself — have to sacrifice some things and adjust their schedules due to the renovations.

She has been working in the library since 1998. She said she enjoys her job because she is passionate about books and likes to interact with people. Eloyan looks forward to the changes that is taking place.

The library is closed on Fridays. The computer lab is unavailable for workshops Tuesday through Thursday from 2:30 p.m. to 5 p.m. starting Oct. 27 through Nov. 19.

The Central Library made arrangements with surrounding facilities to make their services available elsewhere. Visit www.glendaleca.gov for more information.