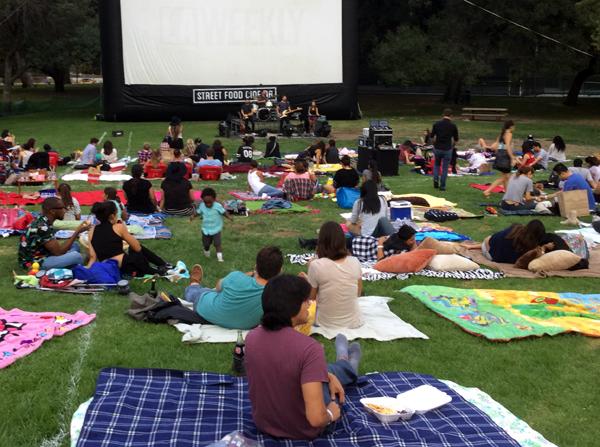 Outdoor Movies, Live Music and Food Trucks in One Night

More than 300 people enjoyed an outdoor movie, live music, and a variety of food in Griffith Park in Los Angeles on Saturday, Sept. 12. The event started at 5:30 p.m. and everyone was well prepared with blankets, pillows, jackets and chairs.

Many people even brought their own food, which was allowed at this event. Megan Ryan, who was supervising the event that night, said it depends on the individual park if alcohol is permitted.  Usually, L.A. County parks are very strict with alcohol. Moreover, dogs are allowed in all parks, except for Syd Kronenthal Park in Culver City.

Street Food Cinema started its events on May 2 and will continue until Oct. 31 on every Saturday. As Ryan said, every Saturday they have a movie, a band, and then either they have a game, or sometimes they have special guests such as actors or directors from the movie. In that case, instead of the game, they do Q&A with them. People go up there and answer some questions. “Every movie we try to incorporate a game connected the movie,” she said.

The live music started at 6:30 p.m. The band that enthused the audience with lots of energy was Tides. Dom Liberati, a singer from the band, said, “We are taking the good part of the ‘80s and modernized them.” Liberati started to sing when he was about 12 years old. He relocated to Los Angeles from Ohio in 2009.

Participants had several meal options. There were different food trucks, such as Comet BBQ, the Grilled Cheese Truck, Belly Bombz, Sabores de Mexico and others.

In celebration of  the 25th anniversary of “Edward Scissorhands,” the movie was screened at 8:30 p.m. The movie was about a kind man, who had scissor blades instead of human hands. He was living in isolation, after appearing in a new community.

During the event, organizers sponsored an “Edward Scissorhands” feeding contest. A few couples came up with Scissorhands’ gloves and they had to feed marshmallows to their girlfriends or boyfriends. Whoever ate five first won. Winners ended up walking away with free passes to future Street Food Cinema events. Paul Walter Hauser, the host of the event, who joined Street Food Cinema two years ago, said it has become his favorite job.

Street Food Cinema does not own parking lots. Street parking is available at many of the events.

Tickets can be purchased online at streetfoodcinema.com. General admission tickets are $12 for adults and $6 for 6-12 year-olds. Children under 5 are free. Reserved seating is $17 for adults and $11 for children. They also have various discounts for large groups of over 15 people.