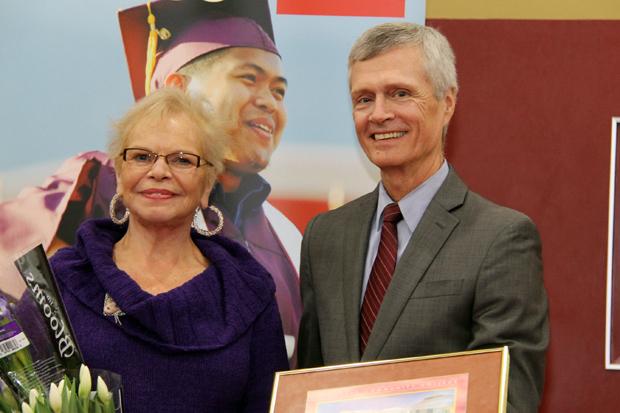 President David Viar poses with Clairette Ingels at the GCC Annual Retirement Recognition Luncheon on May 14, 2015

Schools are only as good as the faculty within them. This year, GCC will lose many faculty members that have been an integral part of the campus community. From professors to administrators, the list of retiring faculty reaches across the board.

Clairette Ingles, an instructor of the Non-Credit ESL Division, has 45 years of service under her belt, acquiring many memorable experiences during that time. Her favorite, however, took place on Teacher Appreciation Day.

“When class was supposed to start, there was no one there,” she said. “As I went to look for my students, they walked in one at a time and gave me a rose.  When they were finished, I had 42 roses in my arms.”

After retirement, Ingles plans to move to San Diego to live closer to her daughter, and to enjoy the weather and venues available there. She also hopes to work as a docent in an art museum and travel as much as possible.

The GCC Nursing Program will say goodbye to two members, Professor Karen Whalen and Nursing Program Specialist Barbara Artukovich. They have dedicated 14 and 16 years to the college, respectively.

Rouben Gasparian, the only member to retire from the Mathematics department, will do so after 17 years of service.

Nancy McLees, Reed Anderson and Guillermo Rios of the Information Technology Services Department already retired earlier this semester after 13, 22 and 26 years, respectively. Rios began his retirement on a high note with a visit to Europe.

From the Visual and Performing Arts Department, Kristine Hanna will be retiring after 21 years.

Armik Gregorian will be leaving the Business Services Department, and has been with GCC for 24 years.

Mary Mirch, the Vice President of Instructional Services, will be retiring after 30 years. A profile on her can be found on page 4.

Ira Heffler, a speech professor and the head coach of the GCC Speech and Debate team, will also retire this semester, much to the dismay of his team.

History Professor Gordon Alexandre’s lectures on social protests in the 1960’s will be missed by many students. His first hands accounts of different protests supplemented the texts, and helped students see the protests from a very real viewpoint. Alexandre retired in 2013, but returned to continue teaching that class.

This also marks the last semester for Jozef Agoston of the Kinesiology and Theatre Arts Departments.

Pat Hurley, chair of the Financial Aid Office, will also retire. After 18 years of service, what she will miss most are the students.

Students havve reached out to the office in the past to tell them that the efforts of the financial aid officers helped them get through school and made a difference in their academic careers.

“There are some students that have said that without their Financial Aid, they would not have gotten through GCC and been able to transfer on to a career field. It is always nice to hear that what we are doing here in the Financial Aid office is making an impact.”

Interim Dean of Student Services Jeanette Stirdivant will also bid GCC farewell after 37 years. Her favorite memory was having the opportunity to work with former Superintendent and President John Davitt, and still finds herself thinking about how he would solve a problem.

After retirement, Stirdivant plans to spend time with her 2-year-old grandson, Sebastian, and to go on a “Culture Quest.” On this quest, she will visit museums and botanical gardens in the greater Los Angeles area that she did not have time for in the past. In addition, she wants to give back to Glendale.

“This place has been good to me,” she said. “Now it is my time to give back to the college and community I love so much.”