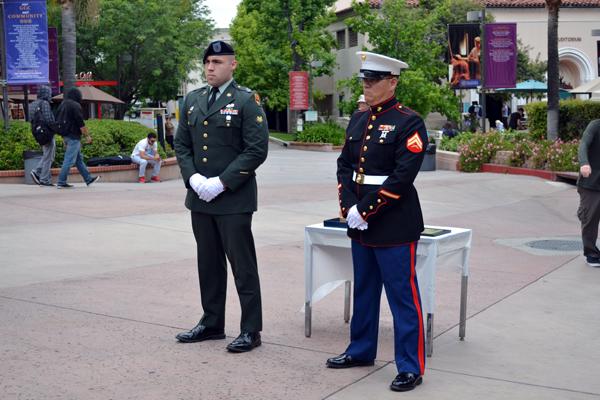 Students, faculty, and veterans saluted the American flag in honor of veterans and fallen soldiers, gathering in Plaza Vaquero on Thursday.

Sponsored by the GCC Veterans Association, the Memorial Day Commemoration event was put together to pay respect those who protect and serve the nation.

“The main purpose is to recognize veterans who are no longer with us, to celebrate their lives, and to let everyone know that there are people who do not come back from war,” said Anthony Martinez, vice president of the Veterans Association and a Marine Corps veteran. “It’s those people whom we ultimately owe everything to because they’ve given us the opportunity to continue on.”

Carol Miranda, an army veteran, was a speaker at the event and led the audience in the Pledge of the Allegiance. The event also featured a Prisoner of War table,which symbolizes the strengths and principles of soldiers. It also commemorates the memory of prisoners of war and those who are missing in action.

“You are me. I am you. We are brothers and sisters. We are veterans,” he said.

“The purpose is to advocate for veterans, to have a voice so that we can continue to fight for other veterans who have given the ultimate sacrifice,” Martinez said. “That’s what Memorial Day is, giving the ones who have passed away a voice to make sure that their memory lives on.”

Since 1971, Memorial Day has been held on the last Monday of May.

“I live everyday to be the best I can, to show people that although we sacrifice and give up a lot, there’s so much we can still provide and give back,” Martinez said.

The audience and veterans of the commemoration event saluted the Taps, the military bulge tune, and the flag during the folding ceremony, led by Cameron Thompson of the U.S. Army and Mauricio Melendez of the U.S. Marine Corps. Michelle Mora, the director of admissions and records, accepted the flag, which was donated to the Veterans Resource Center, on behalf of Glendale Community College.

The commemoration event also paid tribute and honored the services and sacrifices of the late Sgt. Cesar B. Ruiz.