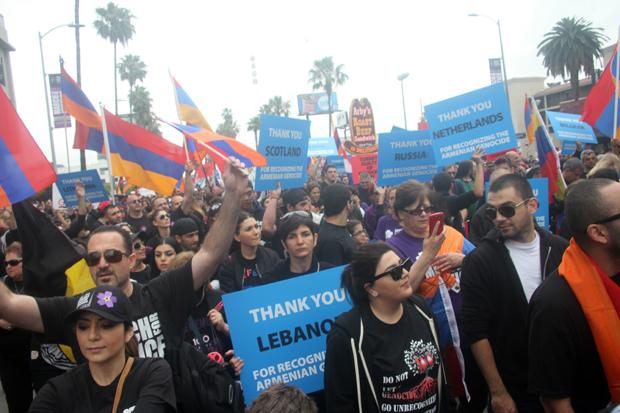 Officials estimate 100,000 Armenians and supporters marched to the Turkish Consulate in Los Angeles on April 24, the 100th anniversary of the genocide.

Glendale and its surrounding cities hosted various events and presentations in the weeks leading up to the centennial of the Armenian Genocide on Friday, April 24.

Pasadena revealed its new memorial on April 18. Around 1500 people gathered to witness the unveiling of the 16-foot tall fixture, in which a drop of water falls from the top of the tripod in 21-second increments. In one year, there will be a total of 1.5 million “teardrops,” the estimated number of Armenians killed during the genocide.

Glendale College commemorated the centennial with various events throughout the month that were dedicated to genocide awareness. It all led up to a wreath laying ceremony at the Armenian Genocide Memorial Plaque in Plaza Vaquero last Thursday, which was recently moved for visibility.

That night, a candlelight vigil, hosted by the Unifed Young Armenians, was held at the Civic Auditorium parking lot.

By having events scheduled on different days of the week, more people were able to attend the March for Justice. An estimated 130,000 Armenians marched six miles from Little Armenia to the Turkish consulate in Los Angeles on Friday. Several speeches, as well as performances, were given by supporters, including Rep. Adam Schiff. 100 doves were released to symbolize peace, unity, and love.

LA2DC, an organization that aims to raise awareness of modern-day genocides by racing for recognition in a coast-to-coast relay marathon, started this year’s race once the participants completed the March for Justice.