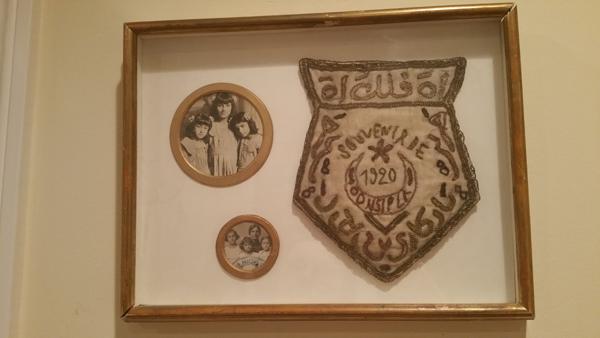 Courtesy of the Gedikian Family

SOUVENIRS: The Gedikian passport photos and a purse from Constantinople are the only items left from their journey to America.

Too few people have heard the accounts of the Armenian Genocide from the women’s perspective, researchers Doris and Arda Melkonian told a GCC audience on March 26.

“Most of the body of the literature about the Armenian Genocide is about the men, their struggles, and their experiences,” Doris said. “Few studies have focused on the survival experiences of females despite the higher percentage of survivors being women and children.”

Glendale hosted a Women’s History Month event titled “Women Suffering, Surviving and Succeeding During and After the Armenian Genocide.” The Ottoman Empire killed an estimated 1.5 million people during the genocide, which began April 24, 1915.

“We make the future by the decisions we make today, but to make those decisions in an intelligent way, we need to look to our past and see what happened before us,” said history professor Marguerite Renner. “We may decide some of that is okay and we may continue it. We also may look at it and say ‘Never again.’”

The Melkonian sisters have read more than 400 of the 800 survivor testimonies collected in the 1970s and 80s by UCLA Professor of Armenian and Near Eastern History Richard Hovanessian. They described the victims as human beings whose existence were disrupted by unspeakable brutality. The sisters focused on the unique stories of women and children.

They surveyed the role women played in the survival of Armenians and their culture. In their studies, the Melkonians discovered that survivors select experiences and share them in various ways. In addition, men and women experience the same situation differently, and use different words and language to share those experiences.

Gender differences can be categorized into two sections: women’s vulnerabilities and women’s resources. Their vulnerabilities were often pregnancy, kidnapping and rape, while their resources were creating bonds, nurturing children, marriage and skills.

Using video clips and stories they came across during their research, the sisters demonstrated just how strong and resilient the women were.

One video showed an Armenian woman recounting the details of sexual harassment toward females.

The Melkonians shared many stories of women who rose above their situation, emerging stronger.

A Story of Women’s Survival

When a town crier announced all Armenian men would be drafted into the Turkish Army, Ardem Abrahamian’s husband, Siragan, had no choice but to leave, never to return.

“When this happened, she had us three girls. She didn’t know what to do and wanted to protect us.” said  the middle daughter, Alice, during her oral testimony.

Ardem put her three daughters, Rose, Alice and Mary, into the homes of three Greek friends.

This allowed Ardem to hide in the basement of a church until the genocide was over. Once it was safe, Ardem went to get her children back. Although there were no problems getting the older two girls back, the family housing Mary, the youngest, did not want to give her up. Ardem agreed to let the family keep her a bit longer while she got back on her feet with Rose and Alice.

“The governor was a pretty nice guy, and you could go and claim your property, so [Ardem] claimed her husband’s three [apartment] units and farm. She was smart, because she could read and write in many languages, and could get back the property,” Alice said.

Both Ardem and her mother were college educated, a rarity for most women during that time.

When Ardem returned again for Mary, the Greek family had their son run with Mary into a farm. Ardem went to the police and got back her daughter, and even though it left her daughter terrified and crying, she was able to reclaim her.

Her mother sold the farm and rented out the apartments before leaving for Constantinople to board a broken Turkish war ship for America.  Mary cried the entire way, leaving her eyes red, a sign of pink eye. In those days, pink eye was cause to be sent back.

“On that old ship, Mother has taught us to sing ‘Jesus Loves Me,’” Alice said.

While going through a medical exam, Ardem dressed the girls in matching sailor outfits and had them sing, allowing them passage through Ellis Island.

Back in the Middle East, families made sure to reclaim their culture, including their religion and customs. In America, it was quite the opposite.  It was necessary to adopt the American culture and to blend in as much as possible.

All three daughters have since passed away. Alice died last January, just after her 100th birthday; however, their stories survive through their testimonies. The eyewitness accounts of survivors allow new generations to learn from their experiences.