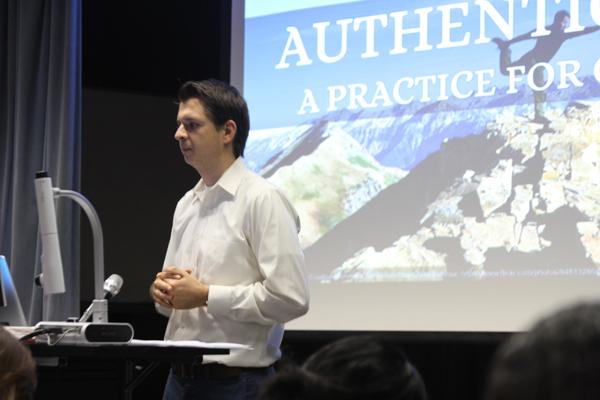 An idea about the difference in math skills between countries became a discussion about the contrasts in educational systems Thursday March 19.

Thomas Voden, a professor with a doctorate degree in mathematics, hosted the Ethnic Mathematics discussion as part of the Cultural Diversity Lecture Series.

“The biggest thing I want people to take from my lecture is that there is more to math than just using symbols and memorizing facts,” he said.

Voden began his lecture discussing his approach to ethnic diversity and mathematics.

“We wanted to explore differences in students of mathematics over time and between different countries,” he said. “But I chose to focus this talk on the educational system students are raised in.”

The lecture continued and highlighted aspects of math that are otherwise unseen.

One slide applied math to art. According to Voden, the mathematical education system in America veers so far away from artistry that Americans do not understand how they can relate to the subject and its concepts.

An example of math’s application to art could be seen in a Zoetropes video that showcased 3-D printed sculptures because when rotated, the sculptures would animate.

“It’s about improving your skills of clear, unambiguous communication in any context,” he said. “Math is so much more about language than numbers.”

His idea that math is about language and not numbers is the reason he believes there is such a divide between American math skills and the rest of the world. According to Voden, there is too great an emphasis on objective assessments.

“Standardized tests are killing us,” he said. “When we make math about the formulas, facts, and procedures, we lose the battle when students ask us ‘when will I ever use this?’ The most truthful answer is that they will need it in the next math class.”

It is a question that students often ask themselves.

“It’s so true. Math in middle school is just about learning it,” said student Katherine Alvizures. “You’re never told any real-world situations where it will come up. All we’re told is we’ll need it in the future.”

According to Voden, one of the big differences between the American math system and countries like Japan lies in the teaching methods.

He said in Japan the method for teaching math is “You, Y’all, We,” and that this method focuses on letting the students solve the problem themselves before any instruction is given. The practice forces students to problem solve, and then come together on a solution.

This is a contrast to his perceived method in America: “I, We, You.” This approach begins with the instruction, and then allows kids to work by themselves. Voden believes that while this method gives results, it is hindering students’ problem-solving abilities.

“Our educational system puts far too much emphasis on assessments that measure things that are just not very important,” he said.

Although Voden highlighted problems with America’s math educational system, he did see a light at the end of the tunnel.

“We have to keep pushing for studies, keep pushing the envelope. It’s a slow game, but we can do it,” he said.