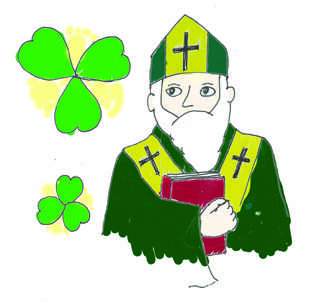 Every Saint Patrick’s Day, many Americans put on green apparel, participate in parades, and perhaps partake in a round of beer to celebrate the Irish. But few celebrators know the true meaning behind the holiday, who Saint Patrick really was and what he means to Irish culture.

“The holiday has become so modernized and over celebrated,” he said. “It now has little to do with the man behind the holiday and has very little religious meaning left in it.”

Saint Patrick was not Irish and he had little interest in Christianity during his youth. At age 16, he was kidnapped by Irish raiders and forced to work as a slave, tending sheep in captivity and isolation for seven years.

“He was deeply converted while in Ireland. He received a religious conversion and became a very strong believer in Christianity,” Doyle said.

Patrick eventually escaped his captors and returned to his family in Britain, but Doyle said Patrick still felt a connection to Ireland.

“According to Irish folklore, Patrick heard a voice telling him how to escape Ireland. Once he returned home, he heard the same voice tell him to return,” he said. “He also had a very strong religious conviction to return and help the Irish.”

Upon his return, he was ordained as a priest and spent the remainder of his life trying to convert the Irish to Christianity. Prior to practicing Christianity, the Irish practiced Celtic Paganism.

“Saint Patrick’s Day is celebrated on March 17 because it is known as the day he died, but after his death, he became largely forgotten,” Doyle said.

However, as mythology spread, Doyle said Patrick became known as the patron saint of Ireland because he brought Catholicism to Ireland.

“Green became associated with Saint Patrick’s day because of the landscape of Ireland,” Doyle said.

Another common Saint Patrick myth is that he drove the snakes out of Ireland. Doyle said no snakes exist on the island today and that they never actually did.

“Ireland was pretty much submerged during the ice age and it was entirely surrounded by icy waters. It was way too cold for snakes to migrate anywhere,” Doyle said.

He said snakes often represent evil in literature so the banishment is a symbol of change.

“It is symbolic of Patrick driving away the old pagan ways from Ireland and bringing in a new age of Christianity,”
Doyle said.

U.S. traditions invade Ireland during the month of March.

“Ireland has largely accepted the tourism increase during the Saint Patrick’s holiday. They have one of the biggest parades in the world,” Doyle said.

He said the holiday has been good for Irish tourism.

“In Dublin, the run-up to Saint Patrick’s day is an excuse for a four day festival embracing everything from salsa dancing to traditional dances,” according to the tourism website ireland.com. “It is a build-up to the big day with events throughout the entire city.”