Glendale Celebrates the Holidays in Style 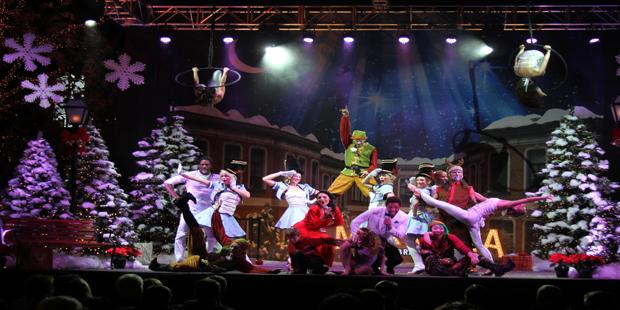 Despite the lack of snow to accompany the holidays, spirit is aplenty in Glendale. Whether it is the Glendale Galleria, the Americana or Montrose, Glendalians do not have to drive far to be part of the festivities.

The Americana launched the beginning of holiday celebrations with a tree lighting ceremony on Nov. 20, in addition to a Cirque du Santa performance, complete with fireworks. Live singers, aerial silk performers and break dancers helped bring the event to life.

Actress and journalist Maria Menounos hosted the ceremony with a special appearance by Santa Claus, who reminded attendees to return during the season to shop and visit him in his cottage, which is set up on the grass, through Dec. 24.

Just across the street, the Glendale Galleria is hosting “Adventure to Santa,” created by DreamWorks Animation. The first-of-its-kind holiday experience begins with a photo with Shrek, Fiona and Donkey from the animated film “Shrek” and continues with a journey to see Santa in the North Pole that takes place in a cottage. There are only eight of these cottages across the United States.

Throughout the 15-minute experience, children are led from one action-packed room to the next before they are led to Santa. There is also a motion-based, virtual simulator ride, which is set up like Santa’s carriage and cushioned with leather seats. It makes riders feel as if they are flying out of Glendale and straight to the North Pole, with the turbulence and acceleration making the experience all the more life-like.

One of the most impressive parts of the adventure is “Santa’s Magic Book.”  When reservations are made online, photos and information, such as age and gender, can be uploaded for each child. Right before a child goes up to meet Santa, he is able to see the information that was input. If a parent has the “Adventure to Santa” app on their iPhones or Androids, Santa can also see the child’s wish list. This way, whoever is playing Santa can know the child by name in addition to what they want for Christmas, making the experience more magical.

The Galleria has entered into a five-year contract for “Adventure to Santa.” With plans to open a theme park in China, this is a way for DreamWorks to test out its operation.

Christina Riojas, the marketing manager at General Growth Properties, the property management company for the Glendale Galleria, said that the future design of “Adventure to Santa” is up to
DreamWorks Animation, and may be the same for the next few years or completely different.

Reservations can be made at dreamplaceexperience.com, so nearly no wait time is necessary.

Farther north of downtown Glendale, the 38th Annual  Montrose Christmas Parade is set for Dec. 6 at 6:10 p.m. The parade will occupy the 2500 block of Honolulu Avenue and all the way to the 2100 block ending at Verdugo Road. The Grand Marshal of the parade will be Johnny Harrison, vice president and general manager of Lexus of Glendale.

For more information about the parade, read the full version of the story online at elvaq.com.