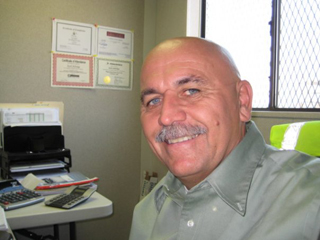 When Karl Aldridge, the college’s consultant and project manager for construction on the new building, was told he only had three months to live, the last thing he expected was for his wife to leave him.

Aldridge, who has been cancer-free for three years, was diagnosed on Dec. 6, 2006.

“You will never forget the day you are told you have it,” he said. “They gave me three months to live.”

He was informed that some of his blood test results were not good, so he went to see a doctor with his wife and they were asked if they wanted to sit down.

That was when his doctor broke the news.

The shock and pressures of the illness created a rift between Aldridge and his wife, resulting in her leaving him.

“At the time, my wife couldn’t deal with it, so she left,” he said. But my children stayed strong.”

The cancer first developed in his prostate but later migrated to the lower portion of his skeletal system. After fighting the disease, he was cancer-free for four months before it came back and he underwent treatment once again. After his second bout with the illness, he was healthy for one year before the cancer returned.

“I fought it again and I went into remission,” he said. “And now I have been cancer free for three years.”

During his early stages of cancer, Aldridge underwent chemotherapy three times, following two bounds of radiation and received 57 implants of titanium seeds filled with radiation inside his body.

“Cancer changes everybody,” said. “It made me appreciate my family much more, especially my kids.”

In 2006, when his youngest daughter was only 7, she was no longer able to sit on his lap for more than a few moments because of his titanium implants.

“Your daughter can’t sit on your lap for two years because the radiation can actually affect her development, for childbirth and la

At that time, Aldridge flew throughout the country to meet with clients, but traveling proved difficult because his implants would often set off all the metal detectors at the airport.

“These are things that you don’t think of on a daily basis,” he said.

Aldridge kept himself busy, physically and mentally and he stayed strong in his business.

“I’m not that kind of person where you lay down and it’s gonna take over you,” he said. “You fight your way through it. A positive mind keeps you strong.”

His doctor told him he was not going to make it if he continued operating at the same stress level he was in, leading him to sell his business and work as a construction manager to eliminate the stress of having employees.

Aldridge has 30 years of experience in construction. He has worked at 127 schools in the Los Angeles Unified School district over a nine-year period, helping with planning, design development and construction in addition to   modernization, repair and renovation.

Glendale College interviewed 19 consulting firms before selecting Aldridge as the representative for the college in the construction of the new Lab/College Service Building.

When Nelson Oliveira, director of facilities and chair of the campus development committee and facilities, was hired on Sept. 24, 2012, one of his most important tasks was to find a reliable project manager.

“We wanted to have a project management firm that provides us with one full-time person to be local here as a project manager like Karl is, and this company also provided support for scheduling and for estimating,” said Oliveira.

When Oliveira received Aldridge’s resumé, he thought, “That’s the man we need here.”

Aldridge helped compile the package for the state when the $1.3 million was need for unforeseen soil problems during the construction of the new building.  There was also underground water and hidden drainage that had to be dealt with before construction could be continued, and with Aldridge’s guidance, the college was able to acquire money from the state to fix the damages.

Oliveira said that he is “110 percent” satisfied with Aldridge.

This construction project marks Aldridge’s first collaboration with the college; however, he is also assisting Oliveira with other small aesthetic projects on campus, such as new trash enclosures that will hide refuse behind the football field.

As the project manager, Aldridge makes sure that construction workers perform at quality level, insures that they stay within the budget and that every operation is completed efficiently and effectively. He is also in charge of maintaining the schedule and assisting the contractor through all phases of construction, from development to the end.

“I provide all the goals that they set and make sure that we meet them,” said Aldridge.