Planetarium Offers Out of This World Presentation 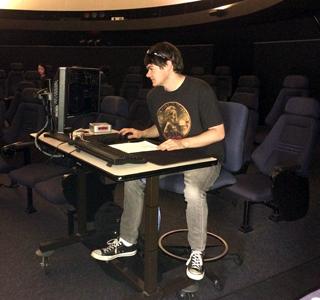 The college’s planetarium opens its doors on most Monday afternoons to the campus community and general public for a series of free astronomy presentations conducted by students and faculty.

The establishment is completely digitalized and was developed using Sky-Skan technology. DigitalSky 2 and Digital Universe 2 present viewers with a live digital star field. SkyVision presents movies featured on the dome. Six Barco projectors are used to enable the movies to be viewed on the screen with a 5.1 surround sound system and automated high-intensity LED lighting.

With a few weeks left in the semester, Astronomy 120 student, David De Legal, enhanced his presentation by displaying the solar system and its dwarf planets on the custom built, 30-foot dome.

De Legal presented his lecture Nov. 17. It was 25 minutes long and he used live narration and projection. Although he was overwhelmed by the technology available to him at first, he grew more comfortable after practicing at the planetarium on Tuesdays and Thursdays

With the controversy surrounding Pluto and where it stands astronomically, De Legal was intrigued and looked more into the subject. Even with his prior knowledge from Astronomy 110, it took about 15 hours of research to prepare his presentation.

Jennifer Krestow is the planetarium director and a full-time astronomer on campus. During Krestow’s introduction for the show, she mentioned that the presentation was also De Legal’s final project this semester.

“He is an exceptional astronomy student who has a deep understanding of the subject matter,” she said. “He intuitively figures out what’s going on.”

Although De Legal was only expecting a few people to show up to the presentation, including his parents, Linda and Larry, there were at least a dozen audience members. De Legal’s parents were excited to see the planetarium because it had not been built when they attended the college in the 1970s.

Tinamarie Antoon, and her daughter, Brionnah Mann, are De Legal’s classmates and enjoyed the presentation, as they were excited to learn more about the dwarf planets that do not get as much attention as the stars and galaxies. They both said that their classmate’s presentation was detailed yet easy to absorb.