Just a Quack in the Park 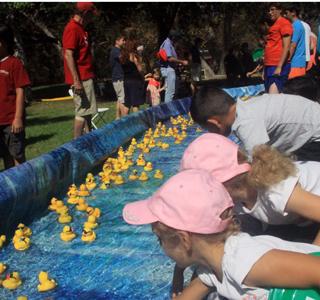 The lingering smell of hamburgers grilling and the sound of duck calls mingled through the  crowd at the sun-drenched Verdugo Park.

The crowd had arrived at the park for the 10th annual Kiwanis Incredible Duck Splash on Oct. 11.

The Duck Splash is hosted by the Kiwanis Club of Glendale and is often called a “duck race” between 200 event producers around the world. A staggering total of 18,000 rubber ducks flowed hurriedly to a finish line to earn prizes for their adoptive owners, who were matched by a unique number of a tag on the bottom of each duck.

“KIDS is a wonderful way to raise money, and my kids enjoy the event every time,” said Eileen Quast, who joined the event with her two daughters for the second time this year. Her daughter, Kiera, was mostly looking forward to the duck race.

The purpose of the event is to support and improve the quality of life in the community. Over the past decade, more than $850,000 has gone back to community programs that benefit children and youth. Many companies and organizations, such as Glendale Adventist Medical Center, Pacific BMW, and even the City of Glendale sponsored the event.

President of the Kiwanis Club Todd Hunt said that fundraiser teams, made up of students from elementary school to high school, organized almost everything at the event.

“It was lucky,” said Lambert.  “I’ve never won this duck race even though I’ve always been seen as the one of the Kiwanis club members for ages.”

At the end of the event, participants and staff gathered around the stage with Hunt at the head and sang “You Are My Sunshine.”

KIDS has not finalized how much money was raised at the event; however, it expects a net total of $55,000. This money will help fund programs like Ascencia, the Salvation Army, Glendale YWCA, Glendale YMCA, various schools in the city, and college scholarships.

“I hope people enjoy and keep supporting us,” said Hunt.