Many Students are Taking Time Off Before College 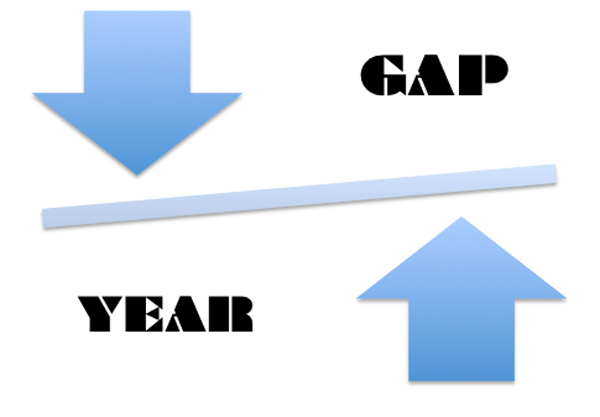 Upon graduating from high school, most students take the traditional route and enroll in a college or university. With the stress and anxiety that comes with starting college, many choose to stay close to home.

Twenty-year-old Mikaela Klein wanted to venture out beyond her comfort zone and take on the experience of backpacking, relishing in the idea of not knowing what is ahead of her.

Klein, who has spent most of her life in southern Sweden, decided to take a gap year after graduating from high school because she wanted to travel and see what the world had to offer before making any major decisions about her future.

During her gap year, she went on a safari in South Africa; explored rain forests in Brazil,  a country where she also ate piranhas and saw pink dolphins for the first time; and went zip-lining, river rafting and diving in Costa Rica. While in California, she visited typical tourist sites like the Hollywood Walk of Fame and she hiked up to the Hollywood sign.

During one of her most memorable experiences, Klein and her travel companion, Felicia Fabia, attempted to climb Table Mountain in Cape Town. However, the heat was unbearable, and she compared hiking up the mountain to climbing up a gigantic staircase. Although the top of the mountain was cloudy, the view on the way up was magnificent.

“[This] is the beauty of backpacking,” said Klein. “You have a destination, but you never know what you are going to see or experience.”

Klein is currently working again in Sweden and about to study mathematics for the fall semester before she heads off to London to study communications, business marketing, or human resources.

Although taking a gap year and travelling is a challenging venture, it offers individuals an opportunity to live through experiences they would not get a chance to otherwise.

“You won’t get to see pink dolphins unless you make a move,” said Klein.

Nineteen-year-old Patrick Magnusson also decided to take a gap year after high school in order to backpack through eastern parts of the globe.  Having spent most of his life in his hometown of Malmö, Sweden, he wanted to broaden his horizons and perspective of the world.  In just 10 weeks, he managed to travel through Thailand, Malaysia, Singapore, and Vietnam and Cambodia. In Cambodia, Magnusson and three of his high school friends visited Angkor Wat, the world’s largest religious monument.

Magnusson saw his gap year as an opportunity to not only travel but also determine what field he wanted to major in. He said that travelling different parts of the globe helped him gain a new understanding of the world and allowed him to observe how different certain places can be, ranging from the dire poverty in Cambodia to the extreme luxury of Singapore.

Seeing the two extremes made him more grateful for what he had, as witnessing the poverty in Cambodia proved to be an eye-opener.

“The ones that seemed poor in our eyes didn’t consider themselves poor at all,” he said. “They seemed rather happy.”

Some experiences managed  to make him homesick, including witnessing an incident in Nha Trang, Vietnam where an accident left one dead and another severely injured.

“At that point I realized how much I missed my mom and dad,” he said.

Magnusson is currently back in Sweden and saving money for his next adventure. He plans to work in Val Thorens, France before heading off to college to study economics. Although he strongly recommends taking a gap year before attending a high institution of learning, he said the only drawback is that developing a taste for traveling may cause some to postpone their studies in order to travel more.

Taking a gap year requires a lot of planning and funding. Both Klein and Magnusson knew where they wanted to go and were willing to work hard to make it happen. Magnusson took on different jobs, including constructing, carpenting, and sales.

Klein was lucky enough to acquire a full-time position at a post office right after high school. She worked there for a little over a year before she was able to afford travelling.

Some can even earn money during their travels by taking jobs abroad, including applying positions as au pairs, which requires moving in with a family outside of the country and earning money through babysitting.

Twenty-one-year-old Christina Malmgren did just that and worked for a family in London for one year.

Malmgren spent her gap-year in England to improve her English skills, gain new experiences, and meet new people. She also wanted to prove that she could live on her own and fend for herself. Malmgren feels that she is now more self-reliant and not afraid of challenging experiences.

“The experience made me more prepared for the challenges of being a mother,” she said.

Malmgren is also currently back in Sweden but is preparing to travel to Australia, where she will study at a university.

Taking a gap year has many advantages, as it allows individuals to explore different parts of the world, gain better insight of different cultures, and acquire a broader perspective of the world. Based on a study conducted by Bob Clagett, the American Gap Association reports that those who take a gap year actually end up with higher GPAs than the young individuals who did not.

Malmgren recommends students take a gap year early on, before commitments like full-time jobs or school schedules get in the way.

“You are only young once and now is the time to explore the world,” she said. “When you only have yourself to consider.”

According to NBC News, taking a gap year is more common in Europe and Australia. The University and Colleges Admissions Service, a non-profit United Kingdom organization dedicated to helping students apply to higher institutions, 5 percent of UK students who were accepted into a university deferred admission for one year in 2012. In United States, only 1.2 percent of students delayed admission for a year. According to Forbes Magazine, there has been a 20 percent rise in students taking gap years since 2006, with many universities encouraging their students to use that time to travel, volunteer, or intern by offering scholarships and financial assistance.

Some people may take gap years not to travel but also to  work and save money for their studies.

Ramona Barrio-Sotillo, the division chair of student services, said that she frequently meets students who attend college straight out of high school but are insecure about their majors and what classes to take.

“Undecided is our most popular major,” she said.

Sotillo believes that taking a gap year to travel, work, or study abroad leads to positive outcomes for students. For example, experiencing something new allows individuals to reflect on what they already have, and the challenges a student may come across during a gap year will help them understand the benefits of receiving an education.

“The experience makes the studies more relevant,” she said.

Sotillo herself decided to take a gap year between her degrees. However, her gap lasted several years, during which she worked, got married, and had kids. Prior her time off, she had already earned her bachelor’s degree in psychology at Cal State Northridge, where she also obtained her master’s in education, educational psychology, and counseling and guidance. She took a few years off before pursuing a doctorate in education and community college leadership at USC.

She believes that students should always look for different ways of challenging themselves, even if they may be satisfied with their current situations. Looking back, she is convinced that her gap years made her a more serious and prepared student.

Everything comes with a risk, and taking a gap year one comes with the risk of falling in love with a place, person, or profession along the way, which, according to Sotillo, might be a risk worth taking.