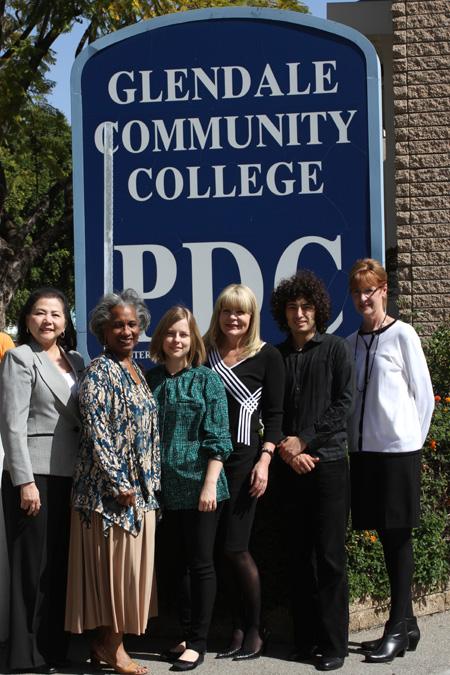 Student success is one of Glendale Community College’s primary purposes. Whether success is defined as a degree, job placement, or financial gain — knowledge is necessary to get ahead. Sometimes that knowledge can come in the form of specialized work training.

The Professional Development Center of GCC in Montrose, works to make training available to businesses and the employees that work for them. For more than 27 years the program’s executive director Kimberly Holland has helped make it one of the most successful programs of its kind, while continuing GCC’s mission.

“There is no one that does it as well,” said Robert Meyer, director of economic development at the Employment Training Panel, a division of the Labor and Workforce Development Agency in California.

According to Meyer, employees are empowered by the skills they learn, making job placement secure for employees and the industries involved more competitive.

“She champions the college in the workplace environment,” said Meyer.

Holland says that most of what she does centers around marketing and outreach. Her involvement in the Glendale Chamber of Commerce puts her in contact with more than 800 local businesses, a diversity that keeps PDC versatile.

Not only are they adaptable in the services they offer, but as a team as well. Holland’s motto is, “We all do everything.”

When the pressure to get work done makes the office hectic, Holland says they will stop in the middle of everything they are doing and play a board game together. She believes that in order to get hard work done there must be a balance.

“Life is too short,” said Holland.

With the hard work that has helped PDC set the standard for workplace training comes the deeper level of commitment and love for what they do. Her late mother instilled many of these qualities and Holland has used them to build the program’s success.

Sharleen Wagner, Holland’s mother, worked as an adjunct faculty member for GCC’s Adult Education Program on its main campus. She went on to found PDC in 1985. Two years later Holland, who grew up in Glendale and at one point worked in GCC’s writing lab, would join the team and work with her mother as an accountant for the company.

She worked her way up, moving from accounting to billing, and eventually became an office manager. All of this experience eventually allowed her to take over as executive director. Throughout this time Holland says she has seen many exciting changes.

Those changes include the wide range of classes that PDC offers at its Montrose location.These include leadership, computer, and advanced manufacturing classes.

SpaceEx, a new space corporation that deals with NASA, recently enlisted PDC to do some of its workforce training. According to Holland it was a tense time and there was plenty of competition for their training needs. This is a huge leap from the programs humble beginnings, offering only a couple of computer classes.

However, large companies are not the only ones that benefit from the services at PDC.

“PDC plays a critical role in the community,” said Judee Kendall, president and CEO of the Glendale Chamber of Commerce.

Companies have to pay for employees to take courses and many small companies that would not be able to afford advanced training on their own receive state assistance to pay for programs. This ultimately translates to more jobs and better pay for those that already have them.

Through its work in the community, the center introduces people to GCC‘s many resources, including its Garfield and main campus.

“Not everyone is going to go to college or have high level careers,” said Kendall.

According to the authors of U.S. Bureau of the Census 2010, only 27 percent of college graduates had a job that was closely tied to their major.

While classes are only offered to employees of companies that contract with them, they are helping support employees. Whether one is a college graduate who needs certification to advance at work, or has worked their way up through a company and needs leadership training to make the jump into management, these classes change lives.

“I can’t over-emphasize the value of continued education.It greatly helped me,” said Lombardy.

Charles Lombardy, a quality engineer at Fralock in Valencia, says his continued education at PDC makes him more valuable to his company. Furthermore, he says the Geometric Dimensioning Technology class that helped him to get his job, is rarely offered anywhere else.

Holland and her team continue to build upon the spirit of believing in yourself and dedication. Success is open to interpretation, often defined as a journey rather than a destination, and PDC is letting people know its training can help on that path.