Taking a Bite Out of Shark Hysteria 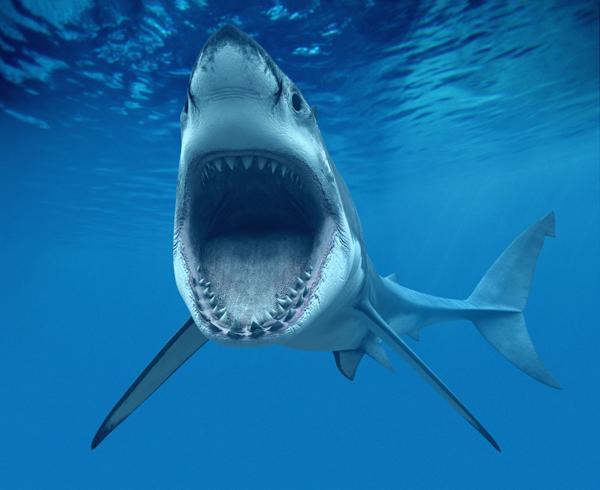 Collier has appeared as an expert on countless TV shows and magazines about sharks and has made it his mission to teach the public that sharks are intelligent predators with little interest in attacking humans.

During a Sept. 25 presentation at the GCC student center, Collier spoke to students and shark enthusiasts about his extensive research on great white sharks. He is the author of “Shark Attacks of the Twentieth Century” and has appeared as an expert on National Geographic and the Discovery Channel on many occasions. He was quick to disprove many stereotypes about sharks that are portrayed in the movies and the media.

“You haven’t lived until you’ve seen a shark coming right at you, then you can go beyond the hysteria and media hype,” Collier said.

The packed student center hung on Collier’s every word as he recalled his more than 40 years of studying and interacting with sharks.

He made it clear that despite being vicious killers, the great white is very intelligent and is capable of making calculated decisions while hunting. He said one hunting tactic used by great whites, called “spyhopping,” demonstrates their intellect. By sticking their heads out of water they get a good view of their surroundings and are able to smell prey from miles away, that would go undetected underwater.

Collier was adamant in distinguishing between the behavior of sharks in the movies and the behavior he has studied for a large part of his life. The reality is that sharks, including the Great White, seldom attack humans. When they do it is almost always because they have been provoked or backed into a corner. This by no means downplays the danger they pose to their pray.

“They have a fabulous sense of smell that is constantly renewed, they have the ability to see in great detail, they really are the perfect predator,” Collier said.

The sight of a 20-foot killing machine swimming at top speed would strike fear into the hearts of most, but for Collier, its all part of the job. He showed a number of pictures and videos of up close encounters he has had with massive sharks. The highlight of the slideshow came when a shark circled the diver’s cage and urinated all over the divers.

“That was his way of saying get out of here, I don’t want you here,” Collier said.

Collier’s knowledge of sharks was on full display during the short hour. Most shark experts believe sharks eat exclusively fish until they are big enough to eat marine mammals, then they graduate to eating exclusively larger animals. Like many commonly held theories on sharks, Collier proved this to be wrong as well.

“It all about availability and capability, a pup isn’t capable of catching and eating a seal, and an adult shark won’t pass up a chance to eat fish,” he said.

Despite being a fearsome hunter, many species of shark are in danger of going extinct. Collier was very clear to the audience that sharks need an untainted habitat where they are free to mate and hunt without human intervention.

“I am very happy he touched on conservation, I know he only had an hour to speak, but I think it was the most important part of his lecture,” professor Victoria Buresch said.

Besides appearing on TV and and giving lectures to students, Collier has been called halfway around the world to investigate a number of unexplained shark attacks. A 5-star resort in Egypt requested his help after a number of tourists had had been viciously attacked by a single shark.

After investigating, Collier concluded these attacks were the fault of the resort employees, who were using divers to feed sharks to attract them close to the resort for tourists to see. The divers had trained the sharks to associate humans with food, and their plan had backfired.

Collier recalled how shocked the hotel officials were at hearing that they were responsible for the attacks. He recalled one official asking how they could “un-train the shark.”

After a laugh, he revisited his central point that most shark attacks are the fault of humans, whether we know it or not. The misconceptions that many people have about sharks is a driving force behind Collier’s research.

He is out to prove that they need to thrive in their habitat without extensive intervention by people.