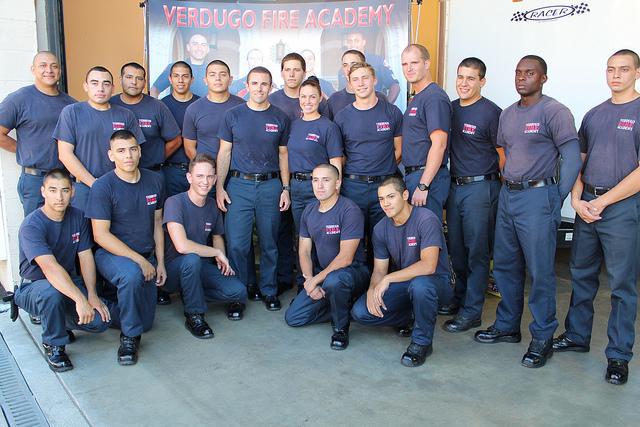 By the time he was 4, Robert Sepulveda was convinced he would become a firefighter. Now, at 36, he is training the next generation of cadets at the Verdugo Fire Academy.

“I would throw a tantrum in the backseat of my parents car if they didn’t follow the fire engines down the street,” he said.

With many retirements in local fire departments and the constant threat of fires in local communities,  firefighters are in high demand.  Sepulveda is the man responsible for training the firefighters of tomorrow  at GCC.

Cadet Steve Hernandez, 26, said, “The training is very hands on, its awesome, but very demanding, we do a bunch of running and we build endurance, which is something you really need as a firefighter.”
A 10-year veteran of the Pasadena Fire Department, Sepulveda has been working as an instructor for Verdugo Fire Academy at GCC for seven years. He traces his passion for fire fighting back to his childhood home in Commerce, Calif., where he lived next to a fire station.

As the lead recruiter for the academy, Sepulveda is responsible for handpicking up to 60 cadets for the grueling, year-long course. He also holds the staff position, giving him a supervisory role over the other instructors.

Cadet Ryan Santos said, “The instructors are tremendous, even on their off time they are pushing us to be better.”

The recent fire that destroyed huge parts of Yosemite National Park is just one example of the need for fire academies that train firefighters. Sepulveda and other instructors are forced to balance their duties as firefighters and engineers in local fire departments with training the cadets.

“Some of our instructors have been sent out to battle these fires when they were assigned to be instructing at the college,” Sepulveda said. “This season is an example of how dangerous this job really is, as it has been the third worst season for firefighter fatalities ever recorded and it’s still not over as we approach the Santa Ana wind events in October/November,” he said.

The demands placed on the shoulders of Sepulveda are what he has prepared for his entire  life. The road to becoming a firefighter is never an easy one, and Sepulveda’s story is no exception. He joined The Explorers at the age of 15 (the minimum age requirement)  and stayed until he was 21.  He received his AS degree in Fire Science from Rio Hondo College. After graduating, he took 32 fire department tests over eight years while volunteering for 24-hour shifts at the Monterey Park Fire Department He worked his way up to engineer at Pasadena and took on numerous  responsibilities for the academy at GCC.

“I consider this job to be a sport,” Sepulveda said. “I don’t see any NBA or NFL players lasting 30 years like firefighters do.”

Although physical fitness is a huge factor in selecting cadets, Sepulveda looks for other characteristics in the selection process, with attitude making all the difference in firefighting as it requires following orders and taking directions.

He also listed integrity and accountability as vital traits for cadets.  Earning the respect of the cadets is a huge factor for instructors in the academy. Sepulveda’s background in firefighting is key in gaining the respect of his cadets, who follow his orders and instructions in a military-like environment.

Cadet Michael Covington said, “At the academy we exclusively learn from firefighters, we learn from those who have done, and Sepulveda has done.”               Splitting time between the PFD. and the academy is a full time commitment for Sepulveda.

“The sacrifice is giving up my personal family time on Saturdays and Sundays that I’m not working in Pasadena,” he said. “I miss tons of parties and events because when I’m not working at the station on the weekends, I’m at the college instructing.”

His commitment and dedication, however, is not something that has gone unnoticed by the cadets.

“The instructors are great,” Cadet Lacey Mogan, 31, said. “We see instructors like Sepulveda  going out of their way to stay extra hours and work with us.” said cadet Lacey Morgan, 31.At a meeting  on Sept. 5, Sepulveda carefully outlined for the year-long course  for people interested in the fire academy.

“I could go outside right now and teach any of you to pull a ladder, but you have to be willing,” Sepulveda said.

He stressed the importance of entering the academy physically fit. This way more attention can be paid to studying rather than struggling to keep up with workouts. All cadets must become a certified Emergency Medical Technician before they graduate and they are advised to enroll in community service programs to gain a better connection to the community they serve. Sepulveda encouraged anyone with the drive and motivation to enroll in the academy.

“Don’t think that because you’re 45 you can’t make this position,” Sepulveda said.