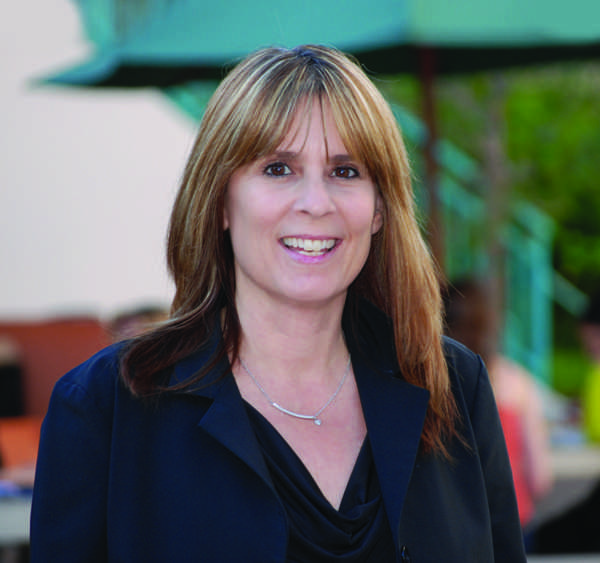 While most of us struggle to get back into student mode and survive the first few weeks of school, GCC’s American State and Local Government instructor Andra (Verstraete) Hoffman (D) is running for California State Assembly in the 45th district.

Hoffman has a long history with the school, having been hired 16 years ago when she was 35 and going on to receive her degree from Cal State Northridge to earn her credentials to teach.

A single mom, Hoffman had to juggle her way through school, work, and  raising two children.

“Going back to school when you’re older is scary,” she said. “Going to school with people who are 20 years younger — that’s scary. There were moments, like when running for office, I would think ‘what did I get myself into?’ But I have that personality where I’m determined and I’m going to succeed.”

Though Hoffman encourages students not to take time off from school and to get their degrees early, she managed to obtain her bachelor’s degree at the age of 40 and her master’s degree in public policy and administration at 43.

In addition to being a professor, she is also currently GCC’s Director of Governmental/External Relations. During her years here, she has managed community service and teacher-training programs funded through grants while also running the job placement center to help students find jobs and internships both on and off campus.

As an Assembly member, Hoffman would like to stabilize funding and restore cuts to programs and services provided by community colleges. She is seeking to win the seat of former Assembly member Bob Blumenfield, who left the position open after being elected to the Los Angeles City Council.

According to Blumenfield, who is currently endorsing Hoffman, one of the biggest challenges he faced while in office was having to make decisions regarding “very painful and difficult cuts,” as a result of the economic crisis.

“Knowing you are making cuts and knowing that it could impact seniors and children and students, but knowing that the consequence of not making those cuts would be worse — that was extremely difficult,” he said.

The state needs to grow in a “measured way” as the economy recovers, Blumenfield said, so that the spending expectations are not higher than what the state can deliver.

“[Hoffman] is going to need to be thoughtful and measured about that, and be able to hopefully grow the programs in a smart way,” he said.

Vahagn Gharagyozyan, a political science major and president of the Scholars Program currently interning for Hoffman’s campaign, says that, as a teacher, she understands the impact state budget cuts have on students and has the real life experience necessary to be a great legislator and to “make a difference in Sacramento.”

Because of her administrative duties at the college as well as her teaching experience, Hoffman says she brings a “broad understanding” of how state government works. Having been both a faculty member and the director of governmental relations, which requires her to travel to and from Sacramento frequently in order to represent the campus,  she said she recognizes issues that pertain to students, faculty, and collective bargaining while representing the district and the board.

“Often times, the district and the board don’t have the same view as the students and faculty,” she said. “What I bring is consensus and an ability to see both sides of an issue. I really hope to be able to be that bridge between business and labor.”

One of her goals is to fund programs that will make career guidance available to students, as she believes that though there are career options, students are not aware of the programs that can help them with their career and educational venues.

Having always had an interest in education, Hoffman also plans to fight for universal preschool, believing it to be a fundamental part of children’s education in the future. According to the Association for Supervision and Curriculum Development, one of the long-term benefits of preschool education is increased high school graduation rates.

Hoffman’s political consultant, Larry Levine, who has worked on over 120 campaigns in his 43-year career span, says he cannot think of anyone more qualified than Hoffman to represent educational needs and issues in Sacramento, especially with her management of job placement programs for students at GCC.

Despite having been approached by other candidates, Levine ultimately chose Hoffman after speaking with her for two hours and working with Blumenfield to assess what kind of legislators the candidates would make.

According to Levine, Hoffman has “a wealth of real-life experience” and “a personal story that is so compelling and so well-textured” that he knew she was the kind of person he wanted to see in the legislature. With the struggles she has faced as a working mom facing the hardships of healthcare and going back to school, Levine says Hoffman has the kind of experience that will allow her to function well on a wide range of issues, particularly education.

Similarly, Blumenfield was impressed with “her journey, her passion, and her sense of vision of what the community could look like” and that she has the real-life experience to “back up that vision.”

Hoffman herself says that both her life and work experience have prepared her to take on the role of an Assembly member in Sacramento.