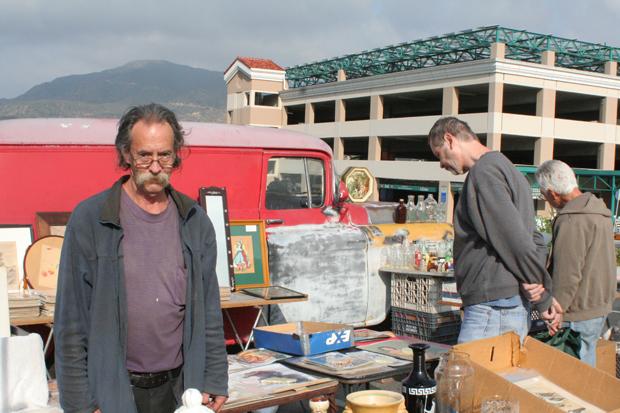 Posters, photos, trading cards, slot machine fronts and lire are just a few of the treasures that can be found at the Glendale Community College swap meet.

Located in the parking lot on Mountain Street and the California 2 Highway, the GCC swap meet is held every third Sunday of each month.

With the many interesting items that the swap meet offers also come the sellers with interesting stories about where they got their items.

One of the traders in the swap meet is Larry Baher, a native of San Gabriel and an antique enthusiast.
Although Baher was born in San Gabriel, he lived most of his life around the country, residing in Chicago, New York and Seattle.

Throughout his years living around the states, his fascination in antiques was only made stronger and stronger.

“Older things are just better,” he said as he explained that things were “given more time to make and think out.”

Baher can be found near the front of the entrance on Mountain Street.

He sells from his red van and he can easily be found by his glasses, long hair and moustache.

Approaching the back of the swap meet there are many more items to be found and many more sellers to meet.
Julia Weber, another trader, also sells movie related pieces in the form of scripts from many movies such as “Jerry Maguire.”

Weber also sells items from artistic plates with art that include old ships and uncirculated LA Metro posters that range from as early as the late 1990s to 2003. She has been selling for more than 10 years.

Weber’s interest in antiques comes from years past to a man known as John Piedmont, who was once an owner of clock shop located in Downtown Glendale.

“Everyone knew John in Glendale back in the day” said Weber. “Now there’s just a mattress store where his shop used to be.”

More to the center of the swap meet and novelty lids, slot machine fronts and binders that say “Pokémon,” “X-MEN” and “Pogs” show up. Ink tape and army surplus badges also are seen within the proximity of one vendor, Jim Ducote.

Ducote was born in Apple Valley, and has been selling at the GCC swap meet for three years.

“You never know what you are going to find in a yard sale,” said Ducote.

Novelty cans with brand labels such as Del Monte to Campbell’s can also be found in stacked self-lidded himself.

“I used to have a friend who would get all the labels,” said Ducote. “I would stick all the labels to the cans and then lid them.”

Hundreds of slot machine fronts are in the center of his stand and require two tables to hold all of them.

“I had a friend who won a storage facility auction and I bought them from him,” said Ducote. “They get so heavy to lift at times.”

The fronts range from simple black and gold fronts with the payouts only displayed to fronts that show the top payout blown in size to entice a potential slot machine player.

Ducote also sells in the Rose Bowl swap meet, every second Sunday of the month.

There are many more stands in the Glendale Community College swap meet, and going is a different experience every time. There is something new in every new meet.

The Glendale Community College swap meet runs every third Sunday of every month from 8 a.m. to 3 p.m.