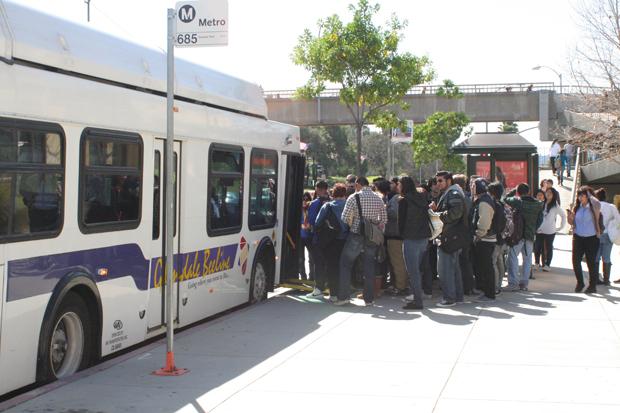 More changes have come to the Glendale Beeline system.

While prices are not rising again, schedule changes have come into effect for the Beeline 3 and a new bus line has been created to get to GCC, the Beeline 32, which runs from the Glendale Galleria to GCC.

The addition of the Beeline 32, which was made to run exactly as the 3, was made to provide more service to college students according to Kathryn Engel, from the City of Glendale Public Works Department, Traffic & Transportation.

The 32 was also made to lessen crowding on Route 3 buses, said Engel. As a result, the campus will have a higher frequency of buses due to the new route, arriving in sync with class times and the Beeline 3.

According to Engel, the schedule switch was studied by a public analysis and was made to complement the Metro 90/91 Route, running from Downtown LA to Sunland, allowing Metro riders to choose which their best option is.

“The Beeline 3 should have really passed more frequently” said Erick Barrientos, a sophomore at GCC. “I would have to wake up earlier [to catch the Beeline 3] to make sure I’m not late to class.”

“I feel the new Beeline route is helping. I can see that it is faster to catch a bus,” said Jake Hassan, a sophomore at GCC. “It’s also helping students with crowding.”

“The Beeline is supposed to be a cheap ride, and 75 cents isn’t such an easy price,” said Hassan. “Transfers help out so much.”

“The point of community college is to save money,” said Lorilyn Luong , a sophomore in CSUN, but takes classes in GCC to save money, “Why wouldn’t you transfer now? It’s cheaper.”

With the schedule changes, the “run time” of the buses on route 7 have increased two minutes, said Engel.
Another option to help the commute for Beeline riders, as well as Metro riders is Nextbus, a new system to help riders know when the next bus on their specific route is approaching.

The Nextbus system uses GPS tracking to predict how long it will take for the bus to arrive at the stop of choice. People can always check when the next bus is coming at any stop on either Beeline or Metro at Nextbus.com.

GCC students can also buy a 31-day pass for the Beeline at the bookstore for $18, saving time and money for many frequent Beeline riders.

Compressed Natural Gas is an alternative fuel that is far cheaper to make, safer to use and 88 percent less polluting than standard gasoline, according to the California Air Resources Board.

LA Metro accomplished the same feature of making all buses CNG in early 2011.