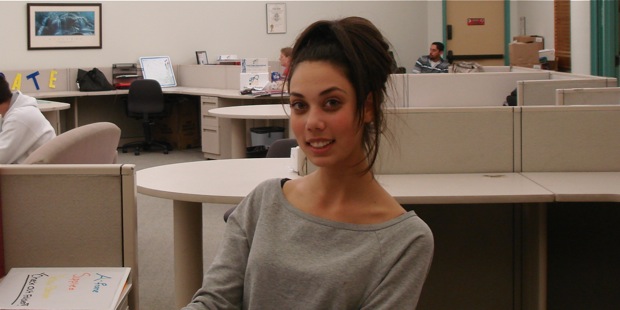 Being elected to the senate of the student government was last semester’s goal for Margaret Andriassian, 18, who ran for the position in November.

ASGCC holds elections every semester for various positions and many students use their social skills and determination to campaign.

“Winning Senator of Campus Relations would be great,” said Andriassian the day before elections while working as the Student Center secretary.

Her previous job was working as a saleswoman and cashier at Wild Pair women’s shoes at the Glendale Galleria during her senior year at Crescenta Valley High School. She graduated in 2011.

Andriassian was one of four candidates running for Senator of Campus Relations. Her odds were pretty good: since there were three seats, she had a 75 percent chance of getting elected.

Adding a spark of cheerfulness to her Student Center-secretary experience increased her odds considerably.

“The ASGCC staff is wonderful and easy to work with,” she said.

She pointed out that her role model is Tzoler Oukayan, GCC’s student activities coordinator. According to Andriassian, Oukayan is a respectful, straight forward and successful woman who started off at GCC after Glendale High School and went on to graduate from both USC and UCLA.

“She has a great job working for the college, and she has a fiancé,” said Andriassian. “She is the number one person after God and Mom that I go to for advice.”

Andriassian ran for senator on the platform of three goals for the spring semester: to increase student involvement on campus, produce monthly newsletters, and to update current issues and future events on ASGCC’s website, Facebook page and Twitter account.

Another detail of being senator that Andriassian anticipated was coordinating ASGCC marketing and recruitment activities.

“Winning,” she said, “would help me overcome my fears and build self-confidence. It would also mean that I would gain leadership skills and a greater connection with the student body and government.”

Andriassian said she was very nervous as the campaigning began. “I’m not used to going up to people and talking to strangers, so overcoming that was a great success.”

She competed alongside students with prior experience in the election process. Other candidates like Amatia Golbodaghi and Raquelle Ross are both very energetic and good at communicating with people, said 18-year-old political science major, Suzy Simonyan.

“Margaret is really comfortable to talk to, though” said Simonyan.

In agreement was 20-year-old art major, Emin Navasartian who said, “Margaret is popular: a really approachable person, sociable and friendly, down-to-earth. Senator of Campus Relations is an ideal spot for her. She knows what goes on among the students because she works there. She’s really responsible.”

Campaigning for Andriassian, which began on Nov. 29 when she had finally gotten her postcard size campaign handouts, went on for two full days. She passed them out to every passerby.

“My friends eventually saw me and stayed with me until 9 p.m. both days and turned out to be a big part of my campaign team,” she said. “The best part was that my best friend since the age of 8, Sevana Zadorian, also won Senator of Administration and we will both be in ASGCC together this coming spring.”

The most valuable lesson learned from campaigning Andriassian said was this: “You get what you put in. If you don’t pass flyers out, form alliances, and campaign, you won’t get the position.”

She added that the three qualities she aspires to uphold as a leader are loyalty, respect and responsibility. Her biggest turning point in life was starting college.

“College opened my eyes to the real world and what I need to accomplish to get ahead in this fast-paced life. I also started my campus job. Going to work and school at the same place is a great advantage when it comes to finding anyone from peers and teachers, to advisors.”

Her major is currently communications, and she wants to follow in Oukayan’s footsteps by transferring to either UCLA or USC.

Even though winning was almost a sure thing for Andriassian, she was truly excited to get the validation from all her voters.

“Yes, I won and it feels great,” she said. “It’s the first time I’ve ever won anything, and it’s an amazing feeling. I love student involvement and think it’s the key to having a successful education.”

More information on ASGCC can be found online by visiting: http://www.glendale.edu/as/.