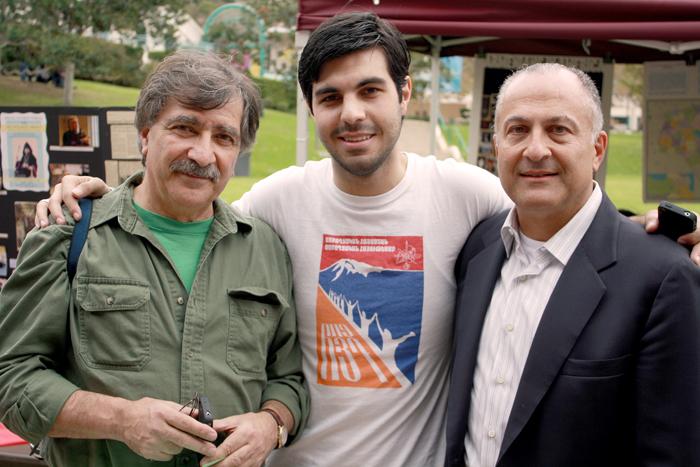 The enticing smell of flame-grilled barbecue and sounds of Armenian music filled the Vaquero Plaza on Nov. 10 for Armenian Cultural Day, sponsored by the Armenian Student Association.

Armenian Cultural Day has been a GCC tradition for many years, giving students a chance to explore the Armenian history, literature and food.

“Students have been organizing this for 30 years to show everything about Armenian culture. The purpose is to educate the public about the rich background of Armenian people whether it’s music instruments, architecture or history,” said Levon Marashlian, professor of history and political science and adviser of the ASA.

The cultural days are common in college and these are good opportunities for every ethnicity to present their own culture. For the rest, it is a chance to get to know others better.

“While diversity is one of the most important aspects of American life, it’s important for students to present information about every culture and their

history to their peers and friends,” said Rafi

member and guest of the event.

These kind of events are important for non-Armenians who can know about their friends, their neighbours and their colleagues. It can also alleviate issues and perceptions that people have toward each other and other cultures, said Manoukian.

While students lined up for food, involuntary tapping their feet to the music, people passed by wondering about the event. Huge posters were lined on both sides of the plaza, silently telling about the history, literature, religion and the background of Armenian people.

The cultural events like these are beneficial, they show the richness of the America as a multi-ethnic country and Armenians are one component of that rich picture, a piece of the mosaic, said Marashlian.

While many non-Armenian students were passing by uninterested, there were many who were not only interested but are also part of it. Melissa Montano, 18, music, being non-Armenian but living in Glendale has come to know Armenian culture and love it.

“I love that everyone tries the food and sees the artifacts that I saw when I was in Armenia so its like the real taste of it,” Montano said. “I think everyone should get a taste of everyone’s culture. I think people should accept them in a way, instead of judging them and that is why I am here, I want to spread the culture and I want everyone else love it as well.”

Having an Armenian father, Tiara Gazarian, 19, is excited to explore her Armenian origins by taking history classes. She thinks that one of the things that Armenians make best is food and she finds this event is a great way to bring everyone together and to bring others to eat with them.

Everybody was excited for different reasons. Some were glad to share the culture, others enjoyed the food and music and others wanted to share why they want to keep the Armenian identity alive.

“Being of Armenian origin I think its important to show others our culture that we had for about three millennia and to show how beautiful our culture is and how we strive to keep our identity in diaspora,” said Arsen Shirvanyan, 20, president of ASA, Middle Eastern studies/peace and conflict studies.

The line of students making the barbecue was a true representation of Armenian culture in action. The warmness and uplifting mood was another ingredient of the event.

“As a person, I’d like to express my passion about Armenian culture with non-Armenians who are curious and want to know more. It’s a really great experience for me,” said Arsine Torosyan, 18, marketing and advertising.

ASA’s barbecue was one of the many cultural events that take place on campus every year, displaying a multiude of Glendale’s diversity and an appreciation for cultural awareness.