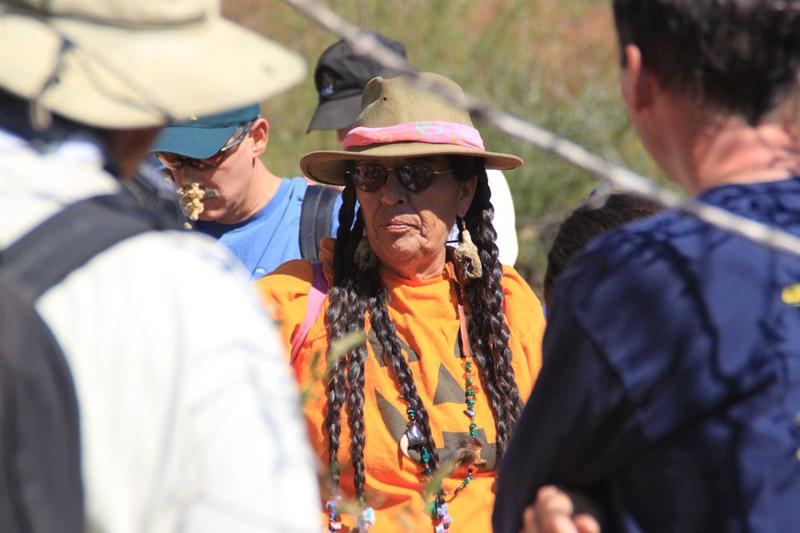 On a clear Saturday morning in the foothills of the San Gabriel Mountains, a Chumash medicine woman leads a group of soccer moms and weekend warriors in prayer, chanting what sounds like “yamaquideh,” a Chumash word meaning “burrowing owl.”

Six long braids sway across her torso as she sings and dances to the song of her ancestors. She speaks with her hands almost more than her mouth, and her earrings, made from great horned owl talons, tell her story better than she does.

She encourages the hikers to “see through the dark,” much like the burrowing owl.

“Do not be half there like everything else we do,” said Chumash healer Cecilia Garcia, urging them to leave behind their city lifestyles for a few hours and participate in the experience.

About 30 people gathered to be led on a medicinal plant hike through Deukmejian Wilderness Park by Garcia, and USC professor, Jim Adams on Oct. 29.

This was only the second medicinal plant hike the two have led through Deukmejian Park since the 2009 station wildfire, the largest ever recorded in Los Angeles County.

“It looked like a lunar landscape,” said Glendale parks department senior administrative analyst Marc Stirdivant, referring to the park after the fire.

Stirdivant has been working for the parks department for almost five years. He retired from his career as associate director on “Frasier” to pursue his passion in environmental work, according to his wife Jeanette Stirdivant, who is division chair of student services here at Glendale College.

Almost as soon as the hike began, it came to a halt. Only a few yards into the trail laid the California Jimson Weed plant.

The plant is characterized by its white flowers, spiked seed pods, and leaves bearing the aroma of peanut butter. Garcia recommends making a sun tea which is used not for drinking, but for soaking feet in. Chewing on a small portion of its leaf is another way to relax, however the taste is unpleasant.

This plant also contains a powerful hallucinogenic in its seeds, which are potentially very dangerous and have caused deaths due to overdose.

One of the most impressive stops along the trail is the McFall Oak. This 300-year-old sprawling tree was named after former assistant city manager Bob McFall, who demanded firefighters preserve the Oak during the Station Fire. Acorns from this tree can be collected seasonally.

The park boasts a lush variety of sage plants, including California sage brush, white sage and black sage. Each has multiple uses and health benefits, from relieving pain and anxiety, to soothing arthritic ailments. Many hikers picked a few stalks to take home for their own personal use.

“Normally we don’t allow people to pick things, but I

One of the most versatile plants studied on the hike was the Yucca. This plant dominates the Southern California landscape and can be used for shampoo, food, and is even a natural source of needle and thread due to its sharp points and fibrous material. The plant can be cooked by baking or frying the stem.

It may come as a surprise that free, naturally growing tobacco can also be found along the trails. California tree tobacco originates from Argentina, and contains twice the amount of nicotine as cigarette tobacco.

However, the plant also has more toxins than regular tobacco and smoking it is not recommended. Garcia uses the California tree tobacco for its natural infection fighting compounds, by packing the leaves over wounds and covering it in animal fat.

The trail becomes exponentially beautiful as it treks deeper into the San Gabriels and about a mile in, the sights and sounds from one of the park’s several streams feels as relaxing and medicinal as the plant life.

Near the end of the trail, hikers were pleased to discover a plant they all recognized: grape vines.

Left over from past generations of people who once cultivated the grapes in the region, the vines line the edges of the pathways. Adams found and plucked a small bunch of grapes and passed it around the group.

The hike adjourned around 1 p.m. and the hikers were invited to meet up with Adams and Garcia back at the parking lot where they were selling copies of their book “Healing with Medicinal Plants of the West: Cultural and Scientific Basis for their Use” and telling their personal stories.

Adams’ ancestors migrated from England to America in 1635. They headed west towards Oregon and due to a shortage of doctors along the frontier, survived through the healings of the American Indians.

Garcia’s Chumash healing techniques were handed down to her by her grandparents. Fear of persecution caused Garcia’s family to hide within their Mexican ancestry. However behind closed doors, her family still practiced the healings of the Chumash Indians.

Garcia partnered with Adams in 1998 when he sought to learn the healing techniques of the American Indian. They have been working together ever since.

The Glendale parks department is suffering from many cutbacks, and is currently accepting volunteers for trail maintenance and safety programs.