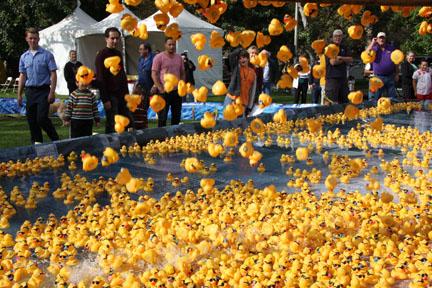 The Kiwanis Club of Glendale will be holding its annual Kiwanis Incredible Duck Splash fundraiser at Verdugo Park on Saturday to raise money for charity causes around Glendale and Los Angeles.

According to rubber duck race coordinator and Kiwanis board of directors member Vincent Espinoza, money raised will be used to benefit 50 nonprofit organizations and schools in Glendale, as well as to fund programs, such as scholarships for Glendale high school students, car seat inspections, and a rice and beans distribution program in conjunction with the Salvation Army.

Proceeds from this year’s race will also be used to fund two endowments for GCC, said Espinoza.

Most ducks are bought by people in the Glendale and Burbank areas, said Espinoza. Ducks are priced at $5 each, with a Quack Pack of five ducks for $25.

People who purchase a Quack Pack will be entered in a drawing for a flat-screen TV. Last year’s drawing winner was GCC ESL professor Marie Bartholomew, who won a weekend at the Las Vegas MGM Grand Hotel.

Ducks are sold through Kiwanis Club members and through GCC’s Circle K International Club, an offshoot of Kiwanis. According to Student Services Technician Meg Gervorkyan, Circle K has sold 500 ducks as of Monday.

“We collected about $1,500 last year,” said Circle K president Nrane Oroudjian, “and half of that went to Circle K.”

According to Espinoza, 18,000 rubber ducks are purchased on average per year.

“We’ve raised $478,000 in the six years that we’ve done this, which all makes its way back into the community,” said Espinoza.

Kiwanis also receives money from donations from sponsors such as Glendale Memorial Hospital, Pacific BMW and the City of Glendale.

The race takes place in Lake Glendale, a man-made lake and stream created from a combination of tarps and barriers set up by volunteers before the event and filled up by the Glendale Fire Department.

Approximately 5,000 rubber ducks are dumped in the body of the lake every half hour to race until all ducks have passed through the course. The winning ducks from each race will participate in a final race to determine who wins the prizes.

Game and food booths will be present at the race. Volunteers from GCC’s Circle K club and Glendale high schools will be manning the booths and assisting in clean-up after the events.

The Glendale Police K-9 Unit will be at Verdugo Park as well, offering live demonstrations and a pet adoption fair.

According to Espinoza, Kiwanis used to have a jazz festival at GCC as its first fundraiser.

“It wasn’t drawing as much people, so we looked to figure out how we could get the community involved, get the word out about the work that we do at Kiwanis,” said Espinoza.

Longtime Kiwanis member Vic Legerton was the one who came up with the idea of the duck race.

“When we were faced with how we were going to do it, we actually bought an ice-skating rink and modified that to build the lake,” said Espinoza.

Espinoza hopes that this year’s fundraiser is as successful as the previous ones.

“We really want the families to come out and enjoy the day,” said Espinoza.