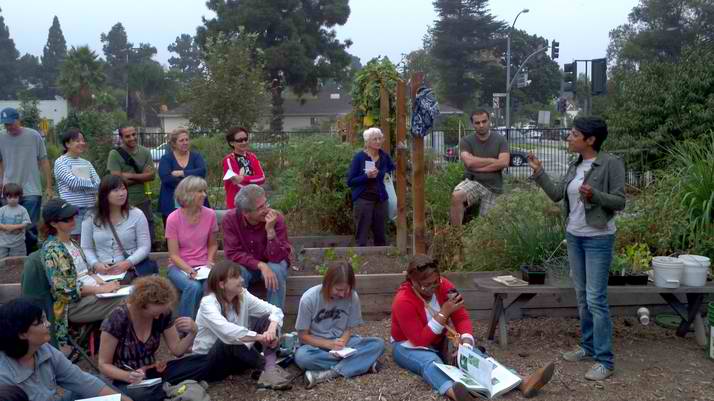 Lush gardens of flowers, cooking herbs as well as seasonal fruits and vegetables are nurtured by both amateurs and experts at the Monterrey Eco-Community Garden in Glendale.

Tara Kolla, gardening expert at Silverlake Farms, was the guest speaker at the garden workshop on Saturday.

The diverse group of about 30 people dressed casually on the overcast morning in jeans, tennis shoes and cozy sweaters. They sat crossed-legged on the mulch-covered ground with notebooks and pens at the ready.

“This is the first time I’ve ever done anything with gardening and I thought it was going to be too much,” said Eleanor Manuel, Glendale, who was on the waiting list for a year. “But everyone was so helpful like a family who looks out for each other.”

Kolla’s lecture revolved around the importance of biology and soil to maximize growth potential as if the plants were on steroids. She informed the group using humor and visual aides.

She was honest in telling the group that she didn’t know anything about gardening when she first moved here. Kolla studied botany and horticulture at Pierce community college and became an encyclopedia of tips. “I had half an acre of land that was a mess and I wanted to make it a productive garden.”

Since many people don’t have more than a couple pots of flowers because Los Angeles is a metropolis of cement, the Coalition for a Green Glendale is trying to open another garden location next year.

“Soil is the critical factor,” said Kolla. “It’s the beginning and end of everything.”

Her emphasis was on compost and how it was key for an organic garden. Compost can be made up of leaves, flowers or practically anything else that would go in the green trash bin.

The city of Los Angeles gives away free mulch and compost at multiple locations.

Other elements such as calcium and sulfur act as micro-nutrients for plants which are also derived from compost over time.

“Get rid of your garden gloves,” said Kolla, when it comes to soil.

She gave the example of yellowing leaves which means the plant is loosing nitrogen. A lot of people would be tempted to water it, but she says it’s important to feel if the soil is moist and inch and a half down because if it is then it just needs shade from the sun.

When it comes to taking out warm weather plants and crops to prep for cool weather crops there are two schools of thought.

Kolla says the first is “old school” which is tilling, yanking out plants and completely replacing the soil which she feels strongly against because “that’s just taking out biology.”

Instead, Kolla prefers the second route which is “biology” including bacteria and fungi. She brought a book and recommended it for more information called “Teaming with Microbes.”

In her research, she has found that large agricultural farms that constantly turn and disturb the soil are beginning to turn to a biological view. Disturbing the soil leads many farms to using chemicals to speed growth but in utilizing biology the residing compost is automatic nutrients for the crops.

“There’s just something so therapeutic about gardening,” said Kolla. “It’s not just feeding yourself and cutting out Monsanto.”

The Coalition for a Green Glendale currently has two gardens across the street from each other at the Monterrey Eco-Community Garden. A full-sized plot runs about $80 a year and a half plot $60. There is currently a waiting list but the coalition is working on opening another garden next year.